attempt to read or write outside of disk hd0 ubuntu

I got a problem with Ubuntu 18.04. It has worked fine all the time, until I had to change the ventilation fan of the desktop. Since I changed the fan, and used spray duster on the CPU and the other parts of the mother board, I get the following message at start-up which stops the system:

attempt to read or write outside of disk hd0 ubuntu

press any key to continue....

There is no chance to do any of the maneuvers that are described in other similar posts here on StackExchange, and therefore I cannot really do anything with it. However, if I restart again and again, at a certain stage, this warning does not appear and the system boots normally.

Is there some way to work around this occasionally appearing problem, or should I just continue as it is, and restart and restart over and over again till it works?

UPDATE #1 after corrections by heynnema.

All disks converted to GPT table. Reinstalled Ubuntu 18.10, but it doesn't start. All I get is the startup animation of the Ubuntu dots that flash from left to right, without any color in the background or anything happening. Inserting snapshot: 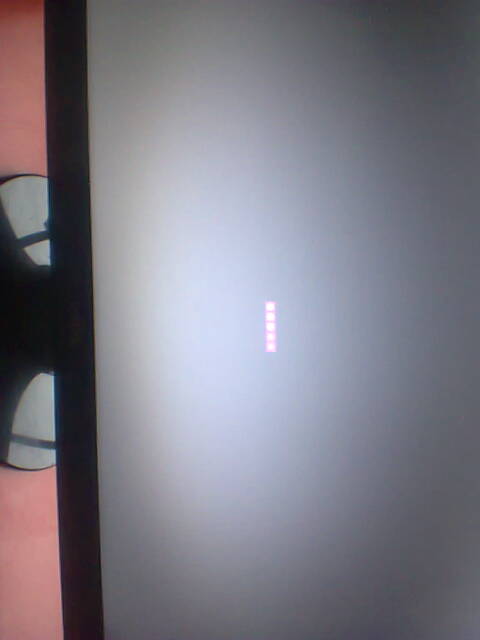 Another restart brings the regular Ubuntu background forth, but as the previous case, it just flashes its process lights from left to right. Nothing happens, the system does not start. What can I do? Should I go over to another table structure?

UPDATE #2: Updated the BIOS to most recent version. Tried to reinstall Ubuntu by erasing the disk and use LVM set up. Installation stopped when entering the LVM menu to make a boot table. Nothing happens, no buttons work. Before LIVD CD starts fully, it shows a dark screen with white text:

the Ubuntu Trial starts then on Live CD and when trying to format the boot drive from LIVE CD In Gparted, the option to format are hidden and cannot be used. Entering Install setup and then at Install options selecting again "Erase Disk and install Ubuntu", it now says:

The computer has not detected operating systems

Installation failed again. Same screen as depicted above in the image.

I've seen complaints of this type of error quite frequently. I've researched all of the various answers, and they're all over the place, with no particular one making much real sense. So I figure that I'll take a crack at it myself :-)

First thing to do is check the filesystem, like so...

Next, I want to take a look at how your hard disk is put together. Edit your question to include a screenshot of gparted when looking at your boot disk.

Also show me sudo fdisk -l and sudo blkid and free -h and swapon and cat /etc/fstab and ls -al /boot. I know that's a lot of stuff to do, but we have to start somewhere. Copy/paste the output into an edit of your question, please don't use the comments, or use screenshots. Use the {} icon to help format the text if need be.

Especially because this problem is somewhat intermittent, please understand that this troubleshooting and repair may take some time, so be very patient.

Although I haven't seen all of the information that I've requested, I've seen enough to have some conclusions.

This is probably a problem with your Grub installation. Maybe a badly written file during a hard shutdown (i.e. turning PC off without a real shutdown).

You can try to force rewriting all grub files by reinstalling all Grub packages. Don't remove them and reinstall them. If there is a problem while packages are uninstalled you may not be able to reboot again:

I just dug out of one of these problems myself with 5.0.0.27. Running fsck came out with no errors.

I finally booted from a flashdrive, moved /boot/grub/grub.cfg to a backup file and then copied the backup file back to the original name. Did the same thing with /boot/init... file, and /boot/vmlinuz... file. Now my system boots!

My system is installed on a single 4TB partition and I think one of those files was out of reach for grub. Doing the move and copy seems to have put them back where grub can now read them.

I stumbled on this approach when I tried to 'cat /boot/grub/grub.cfg' from within grub and I got the same error about reading outside of hd0. When I booted from the flashdrive I had no problem mounting the /dev/sda2 partition and reading the file. Therefore I knew the file was still intact. That lead me to the thought that grub simply can't handle a 4TB drive if the boot files are "too far away". Maybe for me it's time to make /boot be a separate smaller partition!

1
What will happen if we put the ubuntu installed disk from lenovo into dell?