I'm on Ubuntu 16, and I'm trying to repair my startup disk. I have followed the instructions here, but once I'm at the root access of Recovery mode, it still says that the disk is mounted and it can't run. If I try sudo fsck -f /dev/sda3, it just replies:

fsck from util-linux. Anyone know why it might do that? According to this question, when fsck reports this command, you have to use fsck.ext4. However, when I do that, I still get a message about the volume being in use.

I see there's another question about this on Ubuntu 18, but there's no answer.

Most answers suggest using a Live Disk, but Etcher isn't working on MacOS at the moment, and it's surely not unreasonable to get this done from the recovery command prompt.

It's a vanilla Ubuntu install on a Dell Inspiron laptop.

The output of lsblk /dev/sda gives:

(obviously, I'm typing this in on another computer) I've left out the sizes, hope that's clear.

I've also tried umount -lf /. After doing that, when I run fsck, I get a message that it cannot check if the filesystem is mounted due to missing mtab file.

To check the LVM it is done with the following steps.

First we can see our drive layout with lsblk:

as we can see the LVM is named xubuntu--vg-root, but we cannot run fsck on this name as it will not find it. We need to get the whole name. To do this we are going to run the lvm lvscan command to get the LV name so we can run fsck on the LVM.

The following commands should be ran as sudo or as a root user.

If the /dev/xubuntu-vg/root is not ACTIVE, we need to make it active so that we can run the check on it

Now we can run the fsck on the LVM volume.

or to run a forced check with assume yes

Adding a screen shot since VirtualBox will not let me copy and paste. 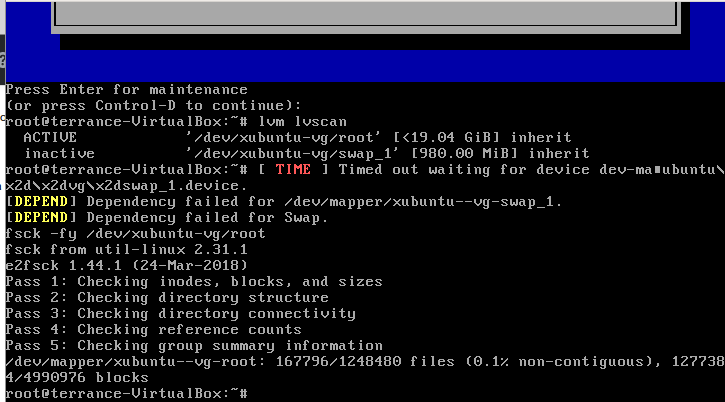 You can try this command:

assuming Ubuntu is on /dev/sda6.

Not the answer you're looking for? Browse other questions tagged fsck or ask your own question.

16
How to use fsck in Ubuntu?
12
Recover from a corrupted filesystem when fsck do not help
2
Disk failure, fsck not doing anything
0
Is it safe to use a disk after a successful fsck?
1
Superblock invalid, disk in use
2
“found.000” directory after fsck
1
the root filesystem requires a manual fsck
3
Can't run fsck in recovery mode in >18.04. Disk is mounted r/w
0
Dualbooting Ubuntu 18.04 and Windows 10: manual fsck repeatedly required on Ubuntu partition