This is a similar question to this one: How do I limit internet bandwidth? but in this case I am looking for a GUI app.

The other question was 2+ years ago so a GUI might be available that I could use to not only monitor but also change the maximum speed at which clients can download. A WebApp or a GUI app will help. It needs to work on 12.04 or newer.

Just to give an idea, I am looking for something similar to NetLimiter that gives me the control to know:

(Only some of those needs could be satisfied with)

Can install it from downloading .deb file from Sourceforge

Can limit Traffic for data volume as well as time. 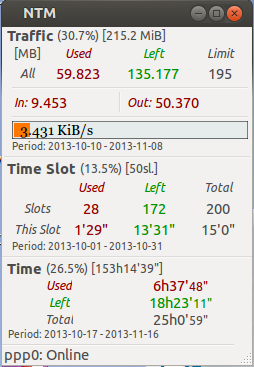 It may be a bit heavy handed in the long run, but you could try Zentyal (formerly eBox).

I have a Zentyal box running and the traffic shaping works great. But, its a standalone box with 2 NIC's and it is my router. I did the Zentyal installer that just paves your machine and makes it a Zentyal box.

Now, I did run Zentyal as a virtual machine in VMWare Player before implementing my production router box. I wanted to make sure I was familiar enough not to hose my internet connection for an extended period of time so I used the VM to practice. It took some finagling to push my workstation's internet connection across two virtual NIC's in a virtual machine on the same box, but once I got it working it did do what you are asking. It was fast, stable, and ran for a couple of weeks in the background and I hardly noticed it. I only gave it one processor and 1GB of ram and it was plenty fast, etc. Again, probably a pretty complex and overwrought solution to what you are really looking for.

I have seen reports of Zentyal modules getting installed piecemeal on an existing box and running in the background and doing what you need. I am not familiar with that method so you'd need to google a bit to get details.

But can I persuade you to upgrade your intent? Would you consider popping a couple of good gigabit nic's in an old pc laying around and firing up Zentyal, pfSense, Untangle, or any other of the many open source, free, full featured firewall's/UTM's floating around? It will give you QoS/Traffic shaping for your entire network and it's a good learning experience. Doing it this way I can watch the usage of my entire network by protocol, watch for unusual activity, drop the ping in most of my games way down, and make sure that when my wife downloads a movie on demand that my xBox doesn't lag so bad I get shot 3 times before a new frame loads.

75
How do I limit internet bandwidth?
2
GUI for running network statistics or bandwidth limiter?