ctrl-alt-t opens a new window instead of a new tab while the shell is the active window. I see in the terminal shortcut settings --which are enabled-- (in terminal window: edit > preferences > shortcuts) that ctrl-alt-t is meant to open a new tab.

Prior to this issue I followed the instructions here to try to customize the shortcut, and I then followed the "rollback" directions in that post to undo it since it wasn't working. Maybe that's what messed things up for me?

Steps to create this issue:
1. open a gnome-shell terminal window
2. mouse click on the terminal to ensure it is active
3. ctrl-alt-t

Edit: Here is a screenshot of the terminal shortcut page. I must have somehow changed the default ctrl-shift-tab to ctrl-alt-tab? 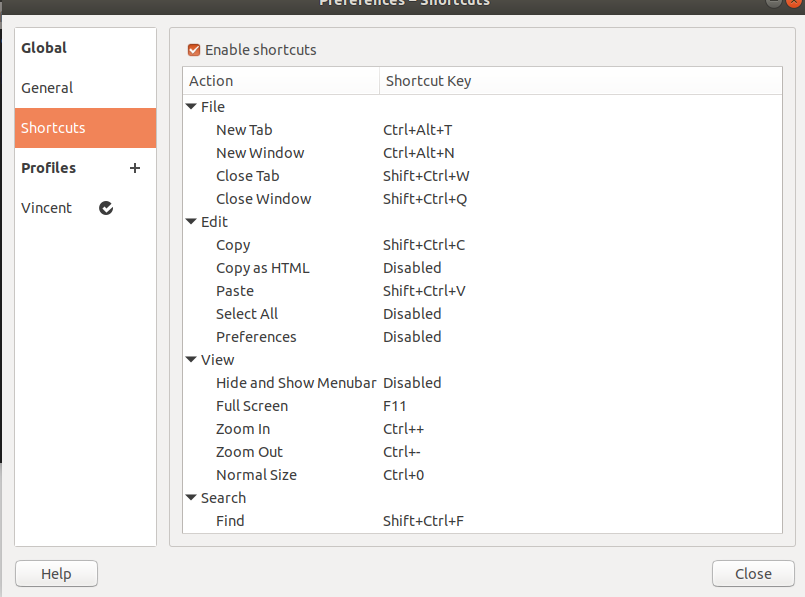 Dont mess with Ctrl and Shift

The default hotkey in gnome-terminal to open a new tab is Ctrl+Shift+Tab. Probably, you did not properly reset that key to the default when reverting the change you made according to the question you linked to.

The behaviour where you see Ctrl+Alt+Tab opening a new terminal window, is perfectly normmal in a default Ubuntu install. That key combination is system wide defined to open a new terminal (see Settings - Keyboard).

To restore the default behaviour, change the assignment of the hotkey to open a new tab back to Shift+Ctrl+Tab in Nautilus preferences. Then you will have fully undone the changes you applied.

Thanks all for the insights and sending me in the right direction!

Not the answer you're looking for? Browse other questions tagged 18.04 shortcut-keys gnome-shell or ask your own question.

34
Set Ctrl+Alt+T to open a maximized terminal
2
How to make alt-w close current tab, not current window, in Gnome Shell
5
ctrl+alt+t random terminal opens
16
How to open new tab in existing window using keyboard shortcuts on Ubuntu
7
make ctrl+t open a new (chrome) tab when outside of chrome
11
How to make "CTRL + ALT + T" open new Terminal window when one is already open?
2
Make Ctrl-Alt-T to open a terminal tab if any terminal was open
2
Unable to Alt+Tab more than once after recent update (Ubuntu Gnome 17.04)