How can I "diff" two files with Nautilus?

I have installed Meld and found out it's a great comparing tool. Unfortunately there is no integration with Nautilus 3.2. This means, I can't right click on files and select an option to open them in Meld for comparison.

I have seen in the tools comment that the tool need the diff-ext package to be installed. This package has been removed from Ubuntu universe, I am guessing because gtk 3.0. Even if I manually downloaded from source forge the diff-ext package, when I try to configure it the check fails with the message:

Ok, so from this output I gather that indeed gtk 2 is being required to install the diff extension to nautilus.

Now, my question is: Is there a possibility to integrate Meld into Nautilus? Or, are there any other diff based tool which integrate with current Nautilus? So gtk3 based.

There is a useful python extension that incorporates Meld into Nautilus 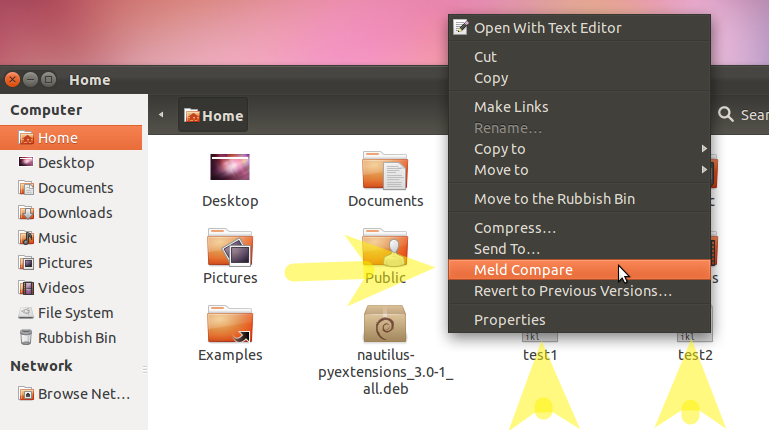 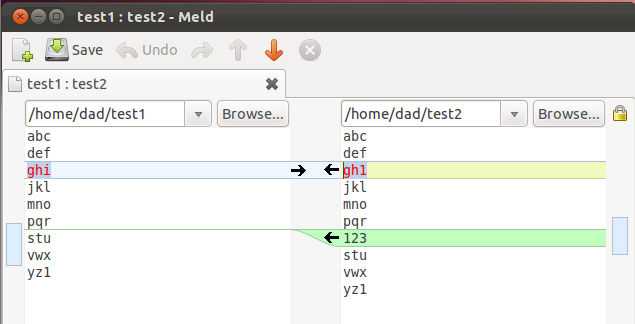 Obtain the source or the deb package from the authors website.

Activate the meld extension (install it if asked) and click the restart Nautilus toolbar option.

In case you find an GConf related error when trying to open Nautilus PyExtension, install "gobject-introspection" and "gir1.2-gconf-2.0":

You can also install the nautilus-compare package, available (starting with Ubuntu 12.04) from the standard Ubuntu package repositories -- run the following from a terminal:

This provides nautilus menu options for 2-way and 3-way comparisons. Meld is used by default, but any user-defined diff application can be used.

A significant advantage of this solution is that one can compare files or folders located in different directories (e.g. /home/user/a/b/c/file.txt and /home/user/d/e/f/otherfile.txt can be opened in different Nautilus windows, and compared against each other).

An easier and more efficient alternative to installing a dedicated extension would be using a Nautilus script like the following one:

Installation instructions: How can I install a Nautilus script?

This answer is primarily used to compare a file to text in the clipboard that was copied from the internet. The clipboard text could have been copied from another file on your system though--making this an eligible answer.

File differences are highlighted using bash's native diff command and then displayed using gedit. This can be modified to meld or any other third party package though.

This answer uses Nautilus's built-in function to run a custom script after selecting a file:

NOTE: I developed this Nautilus script a couple weeks ago and have been meaning to post it as a new Q&A but have been pressed for time and was unsure if anyone would really be all that interested in it. 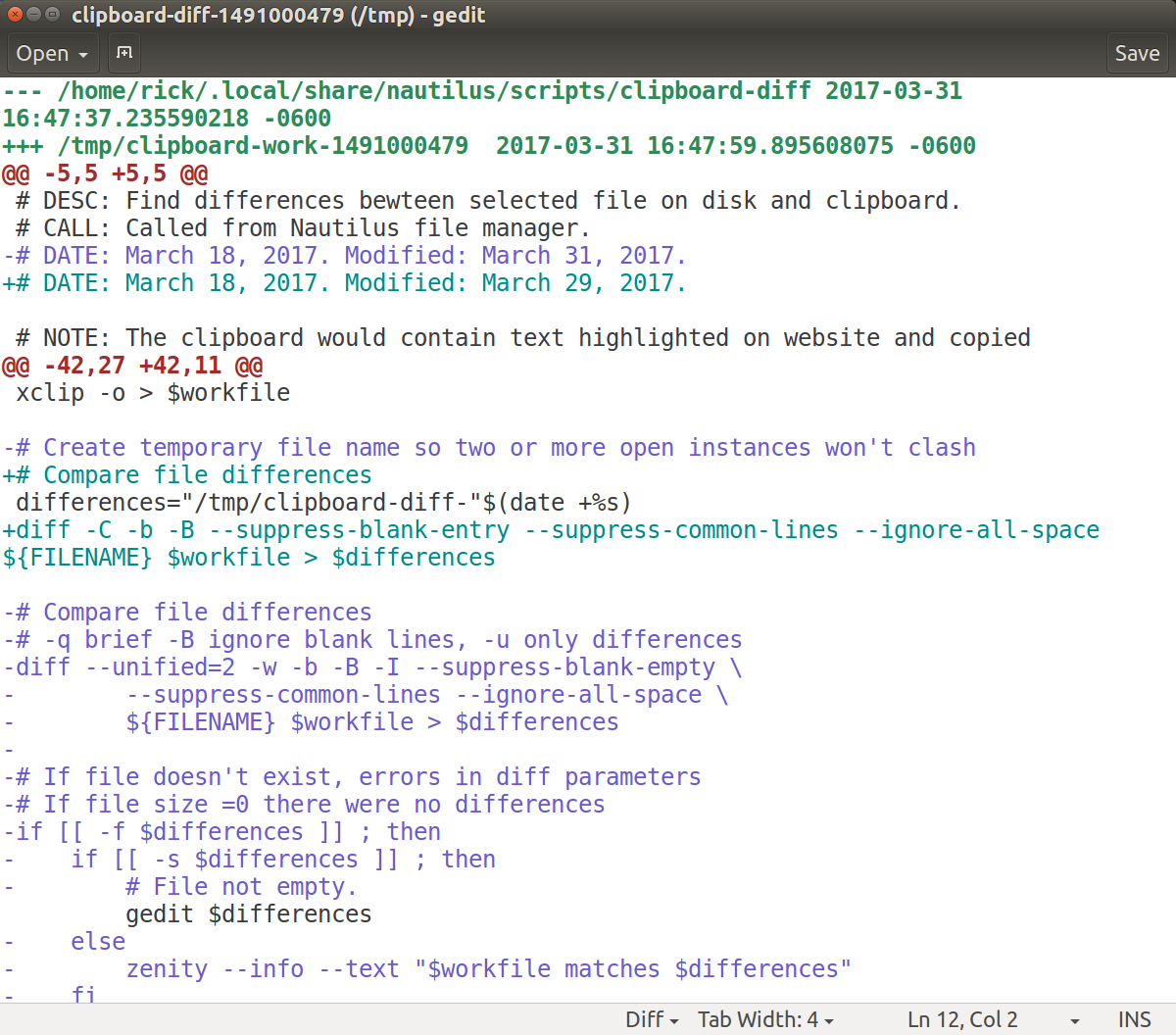 In this example we're comparing the actual script posted here in AU prior to March 31, 2017 to the version revised on March 31, 2017. Notice how new information and error messages were setup.

The diff command is very powerful and as such has a myriad of control parameters. Type man diff in the terminal for the manual pages or info diff for more even more command usage details.

15
How can I install a Nautilus script?
5
How to run a script in terminal when doubleclicked
1
How do I choose 2 files to compare in Meld?
2
How can I find out what plugins I installed for Nautilus?

2
Ingore lines with a specific word with diff
28
How to diff multiple files across directories?
6
How to diff two folders to multiple patch files
286
How do I diff the output of two commands?
0
What does | mean when diff is run on two files?
3
Diff command to compare files which are in first directory only
0
Files (nautilus) issue with two apps
2
How to transfer diff between two different file formats?