I am using the Windows Subsystem for Linux (WSL), and I am unexperimented in the capabilites of linux. Recently, I've been wanting to get better insight in the CPU usage of processes, but I am getting well confused. I am on a computer with 2 cores and 4 logical cores.

In the example of CPU usage that I want to discuss, I launched 2 independant serial calculations from a DFT code (physics stuff) from 2 terminals. I have other smaller processes opened in my Windows system ( internet tabs, Thunderbird...).

if I check the CPU usage from windows' task manager, it tells me that I am using ~70% of CPU, wich seem evenly spread over the 4 logical processors.

When I use top command on Linux, it shows me two "pw.x" processes (the calculations I was referring to) using ~100% of CPU each (!). I do not understand what those "100%" values refer to; 100% of what ? I thought it was the average over all cores being displayed. My computer is still running very smoothly, so the CPU units can not all be used up by the DFT code

If I look it up with mpstat -P ALL, I get yet other results: it tells me that each of the 4 processors are used to ~20%-30%... How is that consistent with the Windows diagnostic ? Or with the top command ?

Cf Screenshot below for a summary (sorry for the french language on Windows): 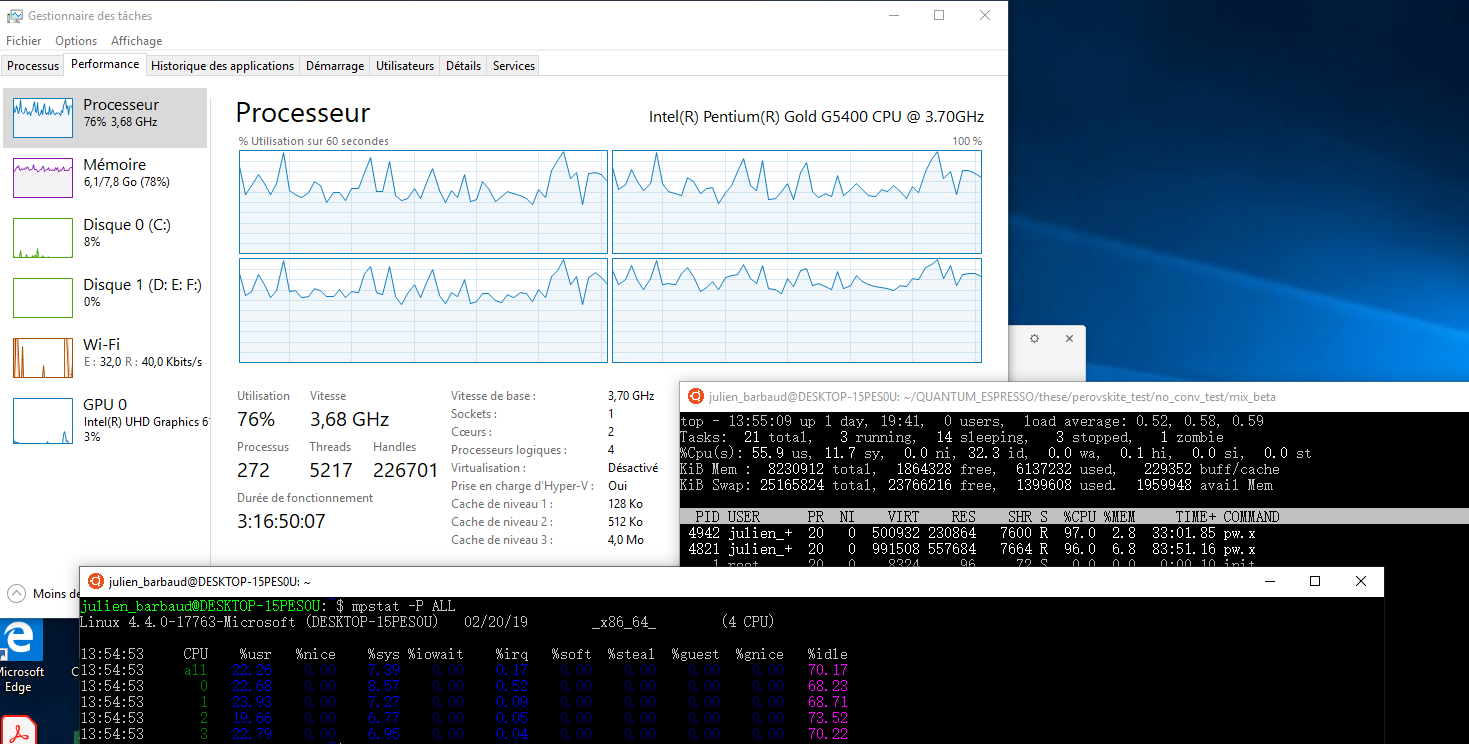 Basically my questions are the following:

I believe Top lists the percentage per thread (logical core), so on your computer you could have up to 4 processes each listed as 100% CPU. Unless you write a program to be idle and wait for hardware interrupts anything you run will take 100% of the thread it is running on as long as it runs. A processes you run will only be on a single thread unless you explicitly program them to be multithreaded, although you may call a multithreaded function without knowing it (some FFT algorithms are multi-threaded).

In WSL top only shows Linux processes, so WSL is using 200%/4=50% of your total, but Windows shows everything together so it is taking up the other 20% to get up to 70% of the total CPU time. "mpstat -P all" seems to be picking up on the Windows processes (perhaps it's a lower level hardware call) and reporting as a percentage of total CPU time, so max would be 25% per thread, but within a couple percent may be as close as it actually gets. The only thing I'm not sure about is why Windows isn't showing 2 threads pegged at 100%.

Not the answer you're looking for? Browse other questions tagged cpu windows-subsystem-for-linux cpu-load top multi-core or ask your own question.