How to set vs code for python3

I recently bought a new laptop and installed ubuntu. I messed around with bash and learned that I there is a default python interpreter. However, the biggest problem that I face is that I can't get it to import pygame, a neat package that I've used in some projects. python3 gives me "ModuleNotFoundError: No module named 'pygame'".

I've scoured around the Internet to find a meaningful solution but only came across someone mentioning /usr/bin/python3. I used it on terminal and did not produce any errors. I couldn't get what the rest of the post was saying because it turned too technical for me (My knowledge in programming is very limited as you have guessed).

Ultimately, what I want is for my vs code to execute python3 without giving errors on the import lines. Or at the very least, I need to be able to run a script in terminal without any preliminary errors so I can debug my own code peacefully. It is also giving me a weird error saying that I don't have pip, again, I already got it installed with:

Or something similar to it. 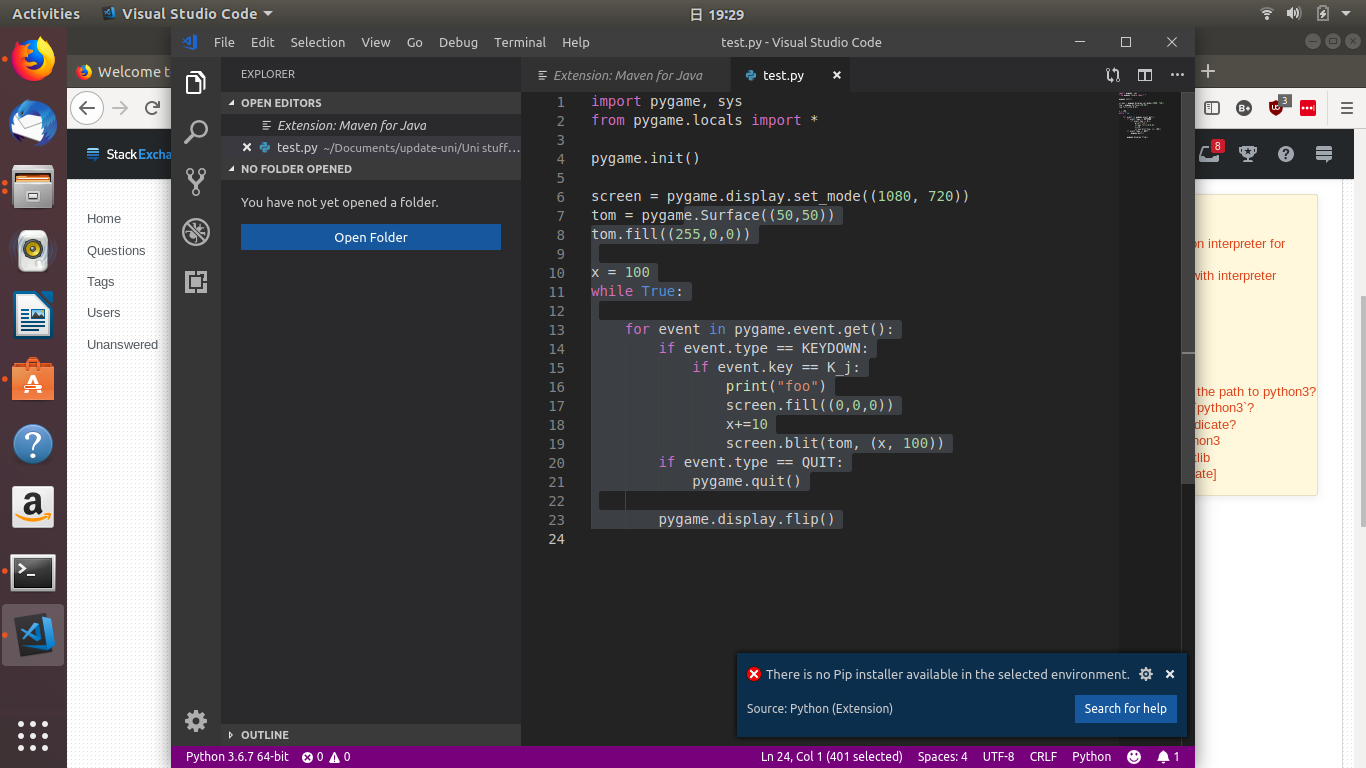 EDIT As pointed out by Kumpel Gras, The root of my problems was that I had only installed pip instead of pip3. I managed to get things working after installing python3-pip

python-pip is the package for Python 2.

You need to install python3-pip and then use pip3 to install your Python 3 modules.

If you want to run your Python 3 code from the command line you also have to use python3, as just python is usually linked to Python 2. You can check for the python version using python --version or also pip --version.

Not the answer you're looking for? Browse other questions tagged bash python python3 visual-studio-code or ask your own question.

0
Install and use Hovercraft on Ubuntu 14.10
2
Installing pip3
0
Tensorboard using Python 2.7, how to change it to Python 3?
1
Broken pip3, pipenv and add-apt-repository on Kubuntu 18.10, probably something wrong with SSL lib
0
/usr/bin/python3: error while loading shared libraries: libexpat.so.1: cannot open shared object file: No such file or directory