How can Shift+Alt+Tab navigation be enabled in GNOME when Alt+Shift cycles between multiple keyboard layouts?

I'm using Ubuntu 18.04 and have used GNOME Tweaks(1) to restore normal keyboard layout switching behavior where pressing Alt+Shift cycles between enabled layouts. I've also used Gnome Settings(2) in an attempt to restore normal windows switching where Alt+Tab brings up a list of windows and moves the selected window from the most recently-used window to the least, and Shift+Alt+Tab moves the cursor in the opposite direction.

Keyboard layout works well. Window switching does not: Alt+Tab behaves as expected but Shift+Alt+Tab does not because it changes the keyboard layout rather than traverse the window list.

How can I restore normal Shift+Alt+Tab functionality when using multiple layouts? I know it's possible because I've read a blog post on how to do it once, however I was unable to find said blog post again.

Edit2: I believe this is not a duplicate of OS keyboard shortcuts conflict with apps keyboard shortcuts in GNOME 3 because it's specific to Shift+Alt and that specificity seems to have allowed for an acceptable workaround. See my answer below.

There seems to be a workaround that allows you to keep using both shortcuts normally:

The only caveat is that reversing window traversal with Shift+Alt+Tab will also change the layout once. This is an acceptable compromise in my case.

The way this is done is to:

I want to mimic PRATAP's helpful answer by posting the steps in pictures:

as a workaround,
Left Alt+Left Shift for "Switching to another Layout" 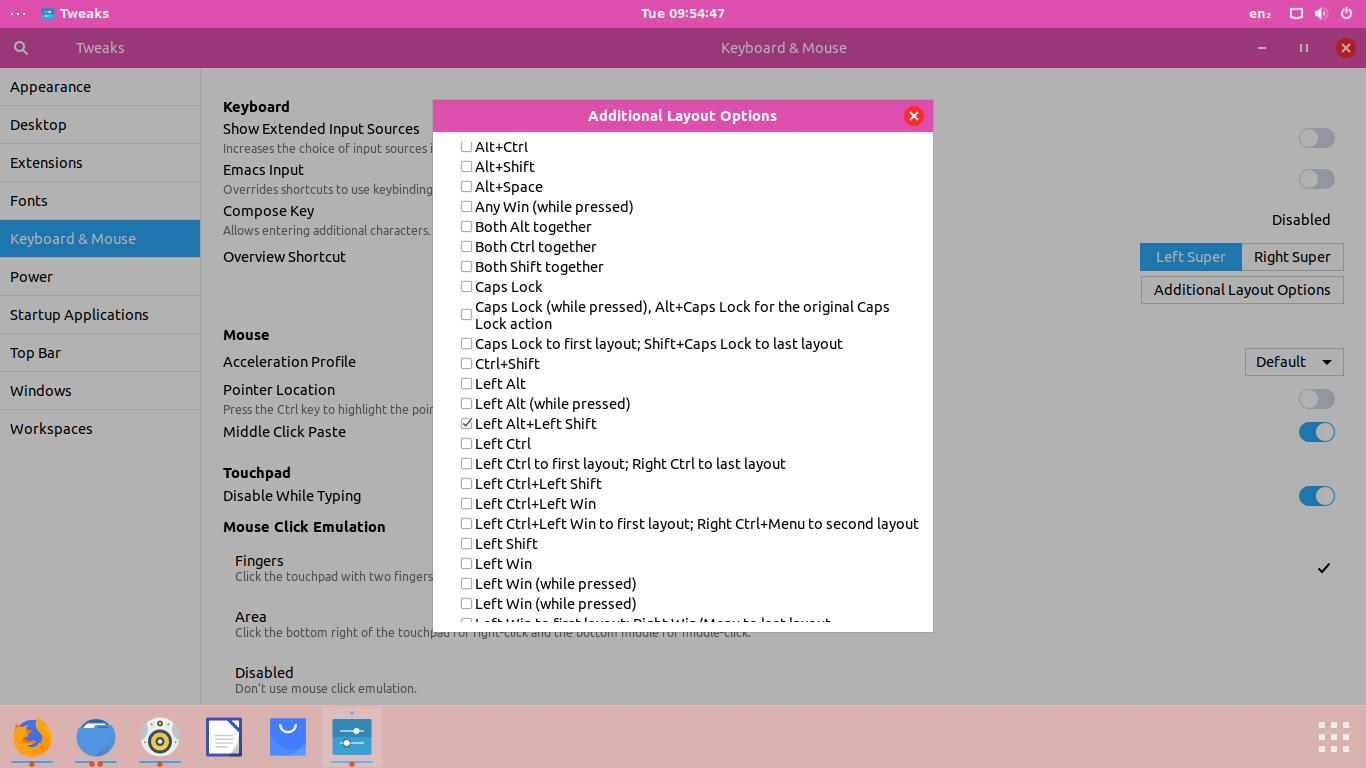 89
How do I "alt-tab" between windows using Gnome 3?
2
How to make alt-w close current tab, not current window, in Gnome Shell
4
Ubuntu 17.04 - how to set Alt+Shift as keyboard layout switch?
4
How can I disable keyboard layout switching with both shift keys?
1
How do I change the keyboard shortcuts for switching TTYs?
5
Disabling alt+shift to switch keyboard layouts in ubuntu 18.04
7
Ubuntu 18.04 alt-tab order is weird when on multiple screens -- any way to adjust?
4
How to configure Alt-Tab to switch between applications without bringing all windows to foreground?
0
Layout is not changed in top pannel (using a gnome-tweaks) [22.04]