Open terminal and run command, from the command line [duplicate]

I am looking for a way to launch a terminal session from the command line on Ubuntu, something like this:

if there is some cross-platform tool that also works on MacOS that'd be nice.

So I tried this:

and I got this: 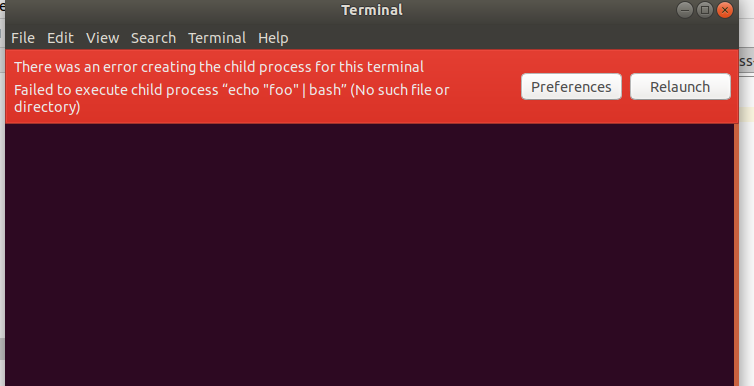 And when I try this:

nothing happens, the gnome-terminal never opens.

Your initial command, gnome-terminal -- 'echo "foo" | bash', attempts to run a program named literally echo␣"foo"␣|␣bash, which you most likely don't have on your system.

The correct syntax would be gnome-terminal -- sh -c 'echo "foo" | bash', but it would not help, unless you actually have an executable named foo. You can see that the syntax is correct by trying

But this is just a very complicated way of saying

As for the intended command, it probably should be

Not the answer you're looking for? Browse other questions tagged command-line bash gnome-terminal gnome-shell or ask your own question.

3
Script to open terminal and show the output of the running commands
3
Launch terminal from bash and run program?