I am a new user in Ubuntu, with a windows background. I have a 500 GB HDD on my old laptop and I made a partition sized around 50 GB for the system use, and another one ~ 410 GB for my personal use. The mount point for the 410 GB one is set to /home, because I could not install the system without a mount point and I read that /home is somewhat of a default.

However, when I install the system the only partition I see in nautilus is this one: 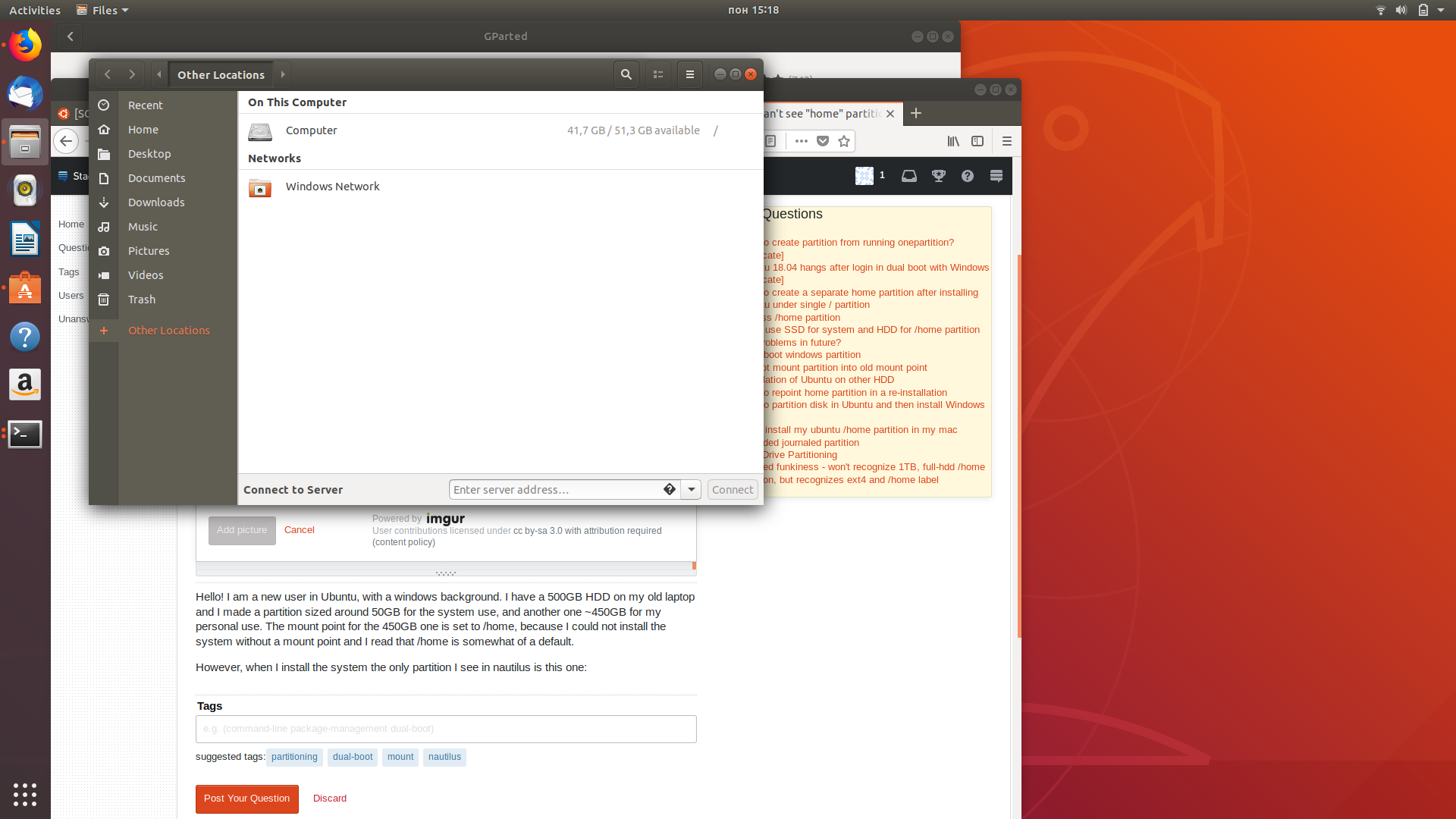 But when I open GParted: 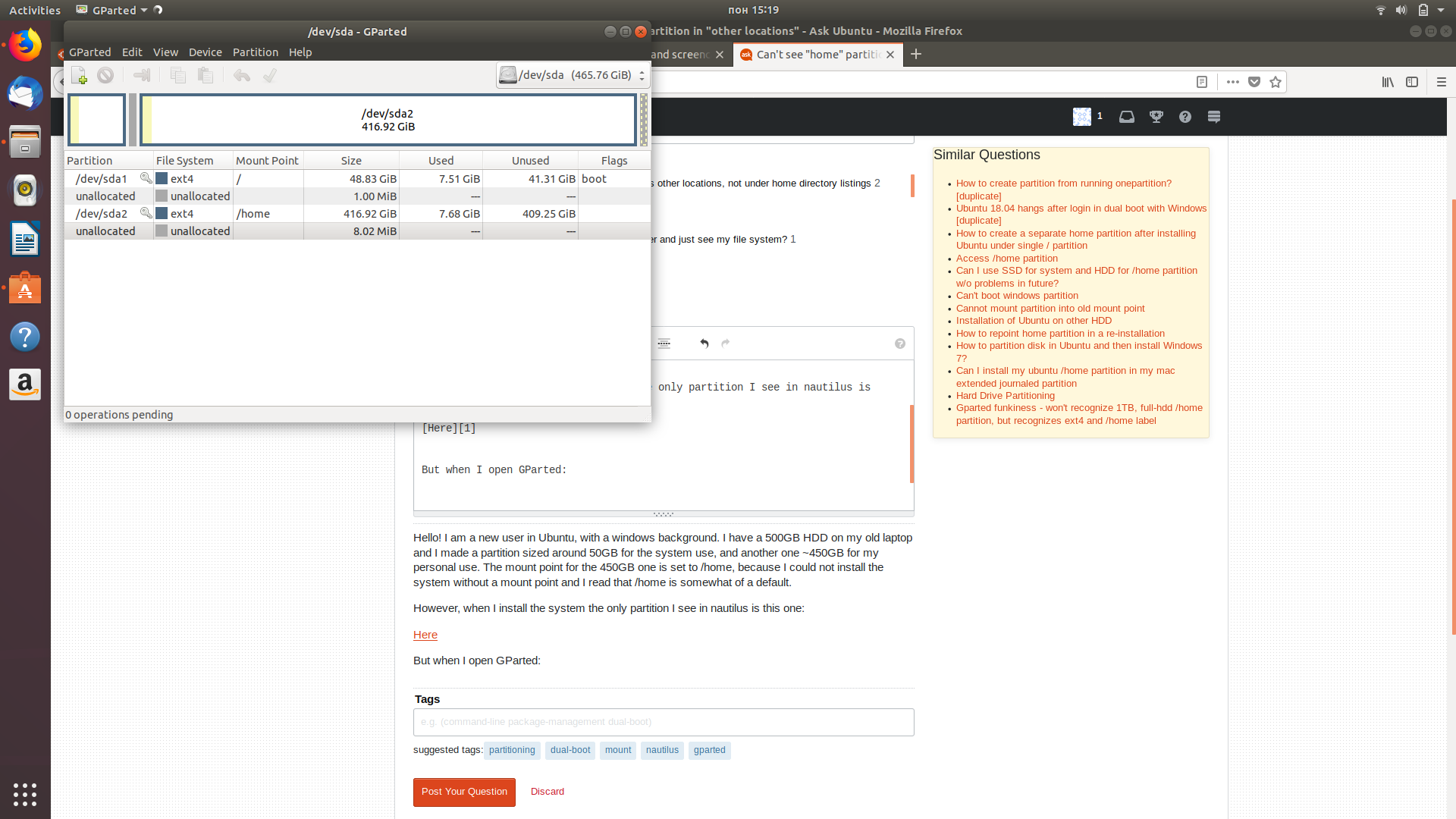 Am I doing something wrong? Is the 410 GB one not used, though it is listed in GParted, and how can I use it?

I wont exclude the possibility of me lacking knowledge because this is my first time using Ubuntu. Maybe it's here and it is active, but I don't know how to access it and store my files on it?

With your settings, I wouldn't expect that you find your "Home" in "Other locations". Your home is mounted when your system boots. You can access it straight via the "Home" (and Document, Music, Pictures...) link in Nautilus, the file explorer. It is not an "Other location", it's part or your File System, even if installed on two different partitions.

Coming from a Windows background, you probably wouldn't know this, but Ubuntu (or any Linux system) uses partitions in a different way than Windows does, which is why you're not seeing both the partitions you created.

As you know, in Windows, when you mount a partition it shows up as a drive (C:, D:, or so on), and all the drives are listed under My Computer. Each drive has its own entirely separate hierarchy of files. But Linux uses a different model. In Linux, as far as the operating system is concerned, there is only one hierarchy, which is more or less effectively stored in the kernel's memory. Partitions get mounted by attaching them at certain points in this hierarchy, namely mount points, and when that happens, the contents of the newly mounted partition appear as directories and files under that mount point.

You can think of it as though partitions in Linux provide backing storage for parts of the filesystem.

Here's an example that, while not being 100% accurate, should help you understand how it works. Suppose your two partitions have these contents:

When the Linux kernel starts up, you can imagine that it starts with an empty "mental model" of the filesystem. ("In the beginning, there was /.")

Then it mounts a partition at the mount point /; let's say that is partition 1. After mounting, the filesystem has these three directories:

Then it mounts partition 2 at the mount point /home. After that, the filesystem has these six directories:

But all of this managing mount points is invisible to you, as the user of the computer. In normal day-to-day usage you don't typically care which directories are on which partitions; when you make a file, all you think about is the path /home/curly/maharajah.txt and you let the kernel worry about which partition to actually put that file on. So, unlike in Windows, partitions are meant to be invisible during normal use, and you work with the illusion that there is only one big filesystem that contains everything on the system. Some file managers, like Nautilus apparently, help promote that illusion by not even showing you what partitions are mounted.

What this means for your specific situation is that you (probably) already have things set up the way you want. Your 50 GB partition is mounted on /, and your 410 GB partition is mounted on /home, and that means anything you create under /home will be placed on the 410 GB partition while everything else on the system will be placed on the 50 GB partition. (Well actually there are other "imaginary partitions" created by various Linux system components, but forget about that for now.) It's just that Nautilus is not making it very clear that both partitions are being used, and in fact being kind of misleading by showing the space usage for only partition 1 in the "other locations" screen.

GParted generally shows the actual mount point of the partition. If a partition is like some external storage device or which has nothing to do with the Ubuntu like in my case I have 3 partitions which doesn't include any system file of Ubuntu, it is mounted in /media/ directory which generally creates a mount point there like I have mount point like /media/kulfy/DE14D51314D4EF8F for my one of the partition. It was created automatically. And this partitions/storage devices can be accessed from Other Locations as well.

Your GParted shows that the mount point for /dev/sda2 is /home thus the partition is already mounted and /home as the mount point. So, there is no entry in Other Locations since it performs as an important part of the main installation. You can also run findmnt /dev/sda2 for more info.

You can create another partition that you can view from "other locations" with gparted, when booted from another drive, for example an Ubuntu live/install USB pendrive.

One advantage with a data partition is that the system partition(s) will be smaller. It will be possible to backup the personal data and the system separately, which is convenient.

One thing you may hear people say about unix and linux is that "everything is a file" and this is a good example.

Ubuntu doesn't show stuff like "C" drive the way that Windows does because each storage device is assigned to a particular directory as mount point in the filesystem.

Bookmarked locations are listed on the left side of your Nautilus window.

To manually navigate to your partition in Nautilus, click on "Computer", which is your root or / directory, and then click "home". This is top level directory where the disk or partition is mounted, /home.

One thing that may have confused you:

External devices will show up as a bookmark in "other locations" when you manually mount an external drive. Nautilus does this to make external devices easier to access because the default mount point is not in your user's Home directory.

Again, these are simply bookmarks. By default, external devices are assigned a somewhat randomly generated mount point under your /media/$USER/ directory.

2
Need to create a separate partition after installing Ubuntu
1
File sharing between Ubuntu 18.04 and Windows 10 on same machine

6
Is it possible to use an Ubuntu Live CD and run GParted to partition a my HDD (including the partition that is usually mounted on a given system)?
0
How can I see my files in 2nd partition of hdd?
1
Gparted funkiness - won't recognize 1TB, full-hdd /home partition, but recognizes ext4 and /home label
0
Access /home partition
2
Is a block size of 4 MiB on a partition of 99.06 GiB too big?
0
Partition moving resizing and separate home partition, is disk space from / also used?
1
I have a "home" partition, now how do I get my system to put my files there?
0
How to make separate partition from partition where I mounted /home?