I've had this issue on and off for about two years now. I noticed it on a new (custom built) machine running 10.04 when that first came out, but then it went away until a few months ago. I've gone through a number of hard drive changes but I can't say specifically what if anything I changed hardware-wise to make it stop or start happening. I had assumed upgrading to a modern Ubuntu version would fix the issue, so I installed 12.04 beta on a spare partition last night, but it's still happening.

Here's the issue. After grub loads and I select a kernel to boot, the screen goes blank save for a blinking cursor. It sits in this state for many long minutes before it finally gives up and gives me an initramfs shell with the message gave up waiting for root device (and lists the /dev/disk/by-uuid/... path it was waiting for) but no other specific diagnostic information.

Now, here's the tricky part. For one, the problem is intermittent - sometimes it progresses from the blinking cursor to the Ubuntu splash boot screen in a few seconds, and once it gets that far it always continues booting fine. The really bizarre thing is that I can "force" it to "find" the root device by repeatedly pressing the space bar and hitting the machine's power button. If I tap those enough, eventually I will notice the hard drive light coming on, at which point it will always continue the boot process after a few seconds. Interestingly, if I wait slightly too long before pressing the power button (30s?), as soon as I press it I get the gave up waiting message and the initramfs shell.

I've tried setting up /etc/fstab (and the grub menu.lst or whatever it's called nowadays) to use device names (e.g. /dev/sda1) instead of UUIDs, but I get the same effect just with the device name, not UUID, in the error message.

I should also mention that when I boot to Windows 7, there is no issue. It boots slowly all the time just by virtue of being Windows, but it never hangs indefinitely. This would seem to indicate it's a problem in Ubuntu, not the hardware.

It's pretty annoying to have to babysit the computer every time it boots. Any ideas? I'm at a loss. Not even sure how to diagnose the issue. Thanks!

Here's some dmesg output from 10.04. The 15 second gap is where it was doing nothing. I pressed the power button and space bar a few times, and the stuff at 16 seconds happened. Not sure what any of it means.

After that, it took its sweet time, and I had to keep hitting space bar to coax it along. Here's some more dmesg output from a little later in the boot process:

Any clues in there?

Some screenshots of dmesg output from the initramfs busybox shell when it fails: 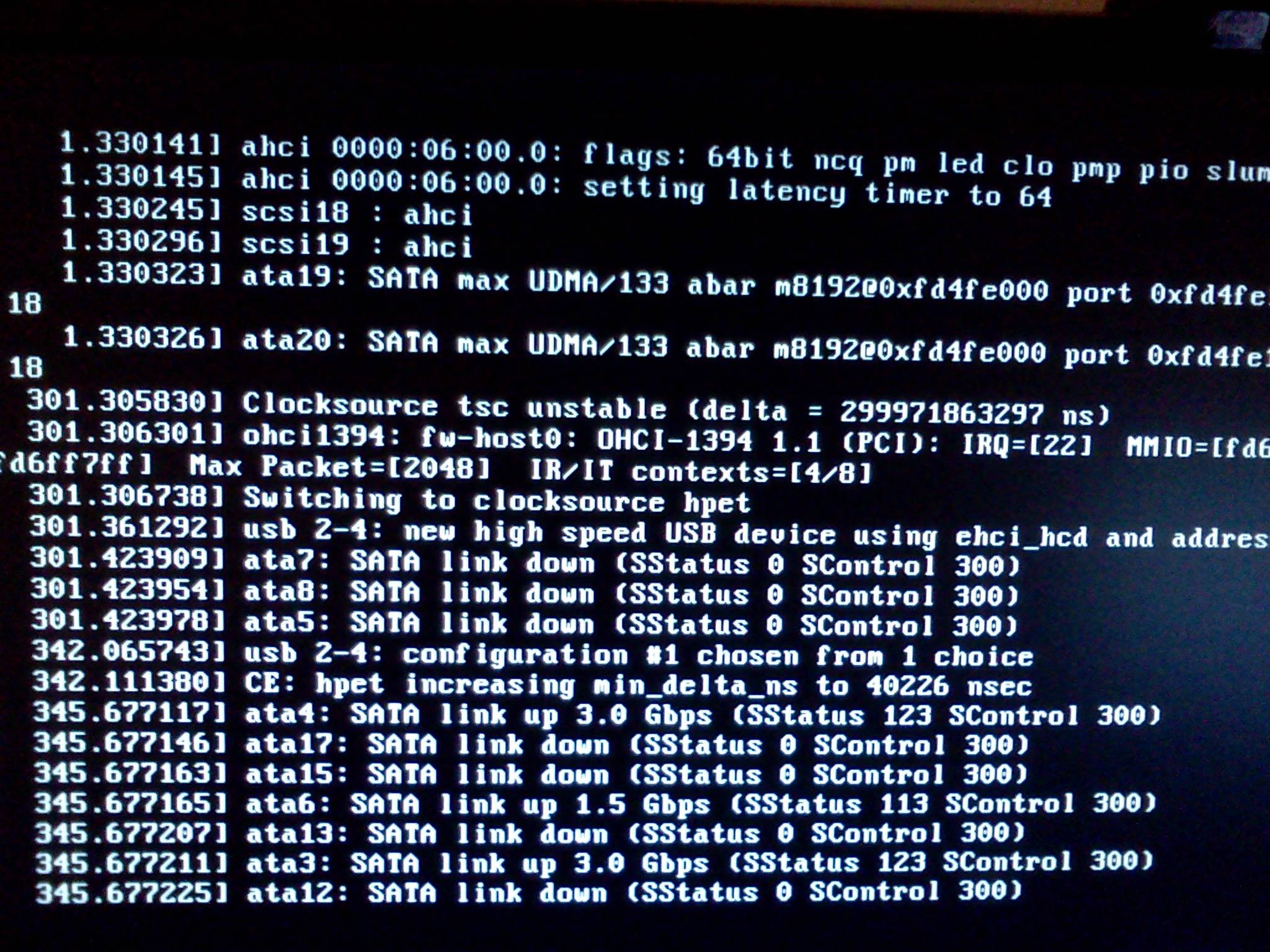 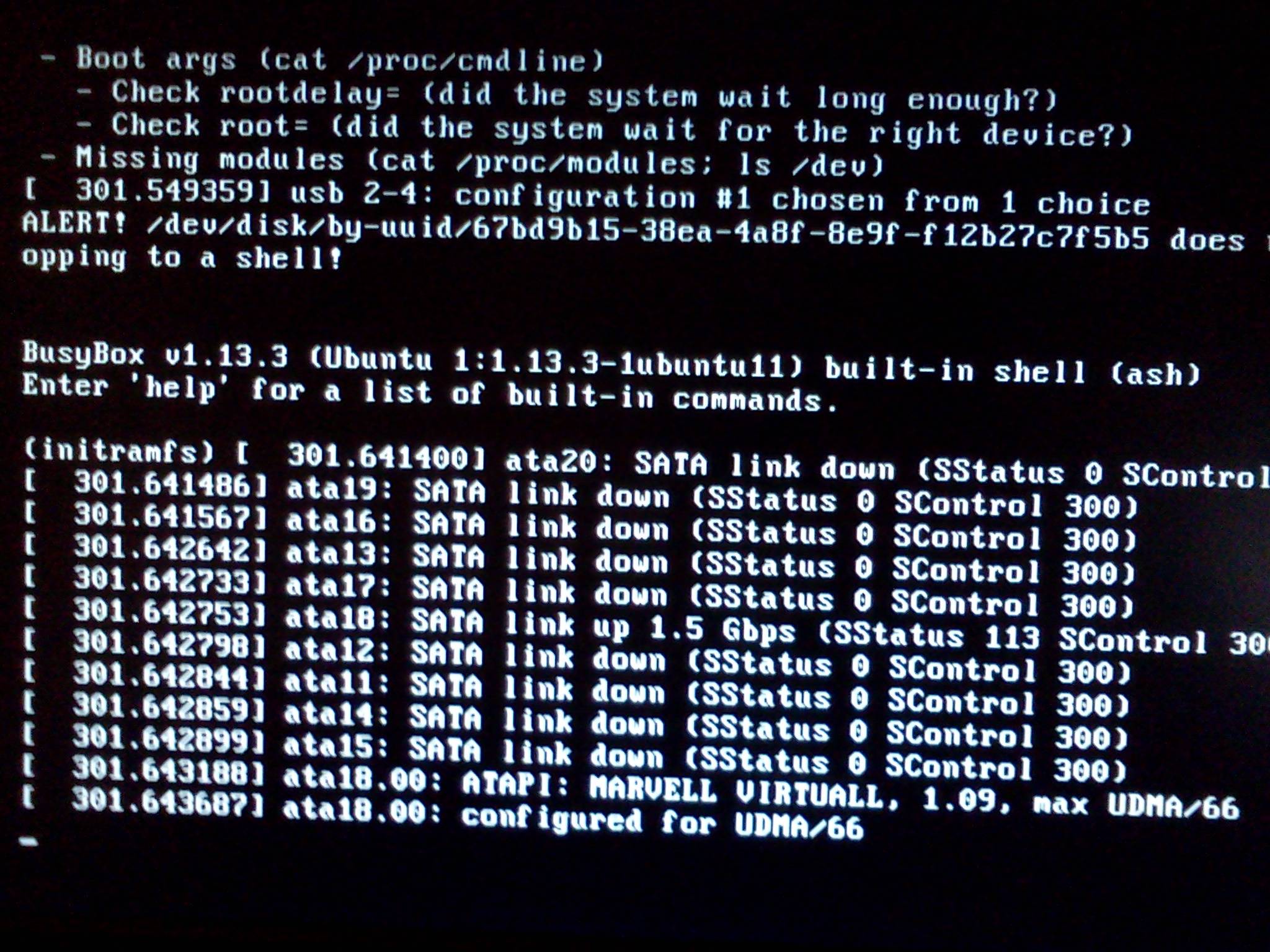 I tried fossfreedom's suggestion of trying a number boot options. So far, it looks like irqpoll is actually working! I've booted four times successfully with it so far.

(As a side note, I can't get irqpoll to stick -- I edited /etc/default/grub to add it to GRUB_CMDLINE_LINUX_DEFAULT and ran update-grub, but still nothin'. What am I missing?) (My grub was hosed somehow when installing the other ubuntus. I fixed it and am seeing irqpoll always now.)

Given that, what is the problem here? It sounds like irqpoll is a hack to get BIOSes that somehow don't adhere to some IRQ standard to work with Linux. How do I figure out what component is the issue, and is there another solution to get Linux to play nice with it that doesn't involve what sounds like so much overhead?

The solution I found was to add to grub the noapic or the nolapic grub boot parameter.

There are a number of grub boot options you can try as per the community wiki:

Thus if standard workaround grub boot options such as noapic or acpi=off dont work for you, some of the other common options could work for you.

When testing grub boot option you could use my answer here to temporarily add the kernel options at boot time.

How do I set 'nomodeset' after I've already installed Ubuntu?

from the wiki: Changes the way the kernel handles interrupt calls (set it to polling). Can be useful in case of hardware interrupt issues.

Thus - and since you have a custom built computer - it is very likely to be one or more components that make up your computer. To discover which one will require a bit of detective work.

The easiest way would be just to simplify you computer to the basics - use a fixed keyboard, simple mouse, onboard graphics, onboard ethernet and nothing else. i.e. pull out all the PCI cards/USB components you are using. Then add each one back in one at a time.

If you find that you still need irqpoll on a simplified build - then you'll need to take a closer look at your motherboard. Look at the manufacturer site and see if there are any firmware updates - most probably you'll need to dos-boot to flash these.

It is trying to mount a device. If 'when booting/during GRUB action' you press "s" this will skip the mount process, and no errors will appear. You will need to edit the fstab file referencing the UUID number. Example:

REMOVE THE LINE COMPLETELY. Save and close. Then reboot.

Not the answer you're looking for? Browse other questions tagged 10.04 boot 12.04 boot-failure or ask your own question.

124
How do I set 'nomodeset' after I've already installed Ubuntu?
3
There is no menu.lst under /boot/grub and 12.04 server can't boot
2
Xubuntu 14.04 LTS not able to Boot
1
How to solve the error of "Gave up waiting for root device" at boot?