How do I configure the launcher to "dodge windows"?

I don't like the auto hide launcher for it is too annoying for me. The launcher stays hidden and to reveal it, the mouse pointer has to be moved to the default hot spot. I'd instead like to have the hide to dodge windows previously available in Ubuntu 11.10. How do I change back to this behaviour?

I'm afraid the dodge window capability was deliberately removed from 12.04

According to Mark Shuttleworth

"dodge-windows approach tested very poorly. We thought it would work well, tried it, tested it, and have had to evolve from there based on evidence....

If users encounter the dodge by moving windows against the launcher, then it is fine. They see that the dodge happens when they push the launcher away, they discover they can move the window back and the launcher will reappear. So far so good.

Here's the problem. Most users don't discover the dodging by moving a window till it touches the launcher. They first encounter it when they maximise a window. So, they login to the desktop. Good. They start an app. Good. Then they maximise a window, and the launcher "disappears". To these users, the behaviour is deeply uncomfortable, random. And these are in fact the majority of users. It also turns out that users who can work with dodging launchers can also work perfectly well with launchers which always hide when not used."

By default the launcher is always visible.

How can I configure Unity's launcher auto-hide behavior?

Dodge Windows is a topic covered by WebUpd8

An enterprising developer has written some scripts that mimic the dodge window behaviour when a window is moved into the launcher area - i.e. it hides and unhides as appropriate.

A similar script is available to autohide the launcher when a window is maximised.

Note - these are in binary deb format. Obviously - installing random binaries is not recommended practise from a security point. Read the article if you wish to pursue this.

How to restore Dodge behavior in 12.04

This Ubuntu Geek post and this newer WepUpd8 post report how to restore the Dodge Windows and Dodge Active Windows for Unity in 12.04. These can then be set in the Unity plugin in CompizConfig Settings Manager. Update: For 12.10 / 13.04, please refer also to this WepUpd8 post.

It is required to add a ppa:

and run a distribution upgrade:

Then open CCSM and set it to your favorite behavior! 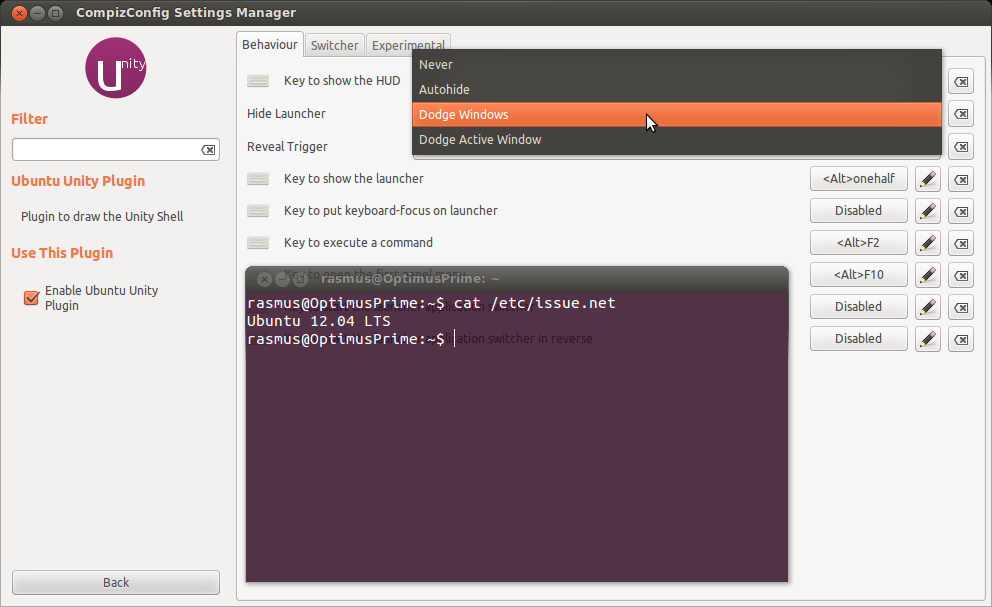 (The terminal is only to document Ubuntu version.)

All changes can be reverted by the following commands:

Alternatively, a hack to restore the older Dodge behavior is reported on here.

I tried out the "real dodge" version, and it works so-so in my opinion. Most notably, the launcher does not "go above" active windows, but pushes them to the side, where it sometimes gets stuck (so the launcher doesn't go away again). In general, when the launcher shifts position, so does many other things on screen (e.g., icons on the desktop).

An alternative is to (almost) permanently hide the launcher (see here) and use a dock with the wished for behavior (for example cairo-dock).

Here is the solution: https://help.ubuntu.com/community/Unity-ReplaceDodgeWindowsBehavior

this feature called dodge. was dropped from unity. there are unofficial solutions to get it back.

There are two window dodge behaviours available: one that works mostly as it used to be in Ubuntu 11.10 and the other one only works for maximized windows:

for further info please see the related section on this post.

Unity 2D is the only way to have dodge in Precise out of the box. After logging in, open dconf-editor and navigate to /com/canonical/unity-2d/launcher/hide-mode and set its value to 2 (the default is 0).

The site webupd8.org has the instructions. As is stated, the instructions are for 12.10 and 13.04 but I tested the one in Virtualbox and it worked flawlessly(well as well as they did in 12.04 up, there are a few limitations as noted in the article but all in all they work well)

Unfortunately, the ppa for Saucy has not bee updated to include these scripts (at least not as far as I was able to determine) so the only solution is to download them directly.

There are 2 different scripts and they cannot be installed together.

The one script only dodges maximized windows. It's biggest limitation is that it will allow the launcher to overlap any windows that were opened while it was hidden.

Here is the link to download the Dodge maximized windows script

Here is the link to download the "original" dodge windows script

The download links that I included above come directly from the article on webupd8.org.

I would suggest that you read the article on webupd8.org that I linked to at it gives a good rundown of the scripts, (I don't want to get into plagiarism territory by including too much of the article.

As an editorial note(read my opinion, which in worth exactly what you paid for it); These "dodge windows" question and workarounds are all over AU and the internet, I don't understand why Canonical is so married to the idea that it was a bad feature. Yes I have seen the articles about why they removed it and it seems like "thin soup" to me, obviously many user want it, and the scripts work well enough.

To give credit where it is due(I think*), I believe that @JorgeCastro wrote the first work-around script back in 12.04(the dodge maximized windows one). Thanks a bunch Jorge, this missing feature was a deal breaker for me and I was considering switching away from Unity(was considering Cinnamon but it was buggy, so you really saved me at least.)

I have taken a bit of a liberty in including this editorial, and my intention was not to start a discussion on the subject, just to state what seems to be a common opinion in the Ubuntu community. Please do not respond to this as a discussion, or I, or the mods will be forced to edit or delete this answer.

In Ubuntu 12.04 the Dodge Windows feature was removed. To get it back you will have to install basically a patched version of Unity.

The easiest way is probably to read the following posts carefully and follow the instructions. There are two different kind of fixes and you'll have to settle for one.

Get Dodge Windows Unity Autohide Behaviour For Maximized Windows In Ubuntu 12.04 Precise Pangolin and Real Window Dodge Unity Launcher Bahaviour For Ubuntu 12.04, I presume you'd prefer the latter. I, however, understand that this is a custom build of Unity and cannot give any information about future updates (should unity receive updates), bug fixes etc.

You might also want to check out the original ubuntuforums thread that dealt with these issues: HOW-TO: Unity with 'Dodge Windows' and minimize/unminimize behavior

This changes 'saucy' to 'raring'.

In my testing I have found that the "Dodge Windows" script (that would nearly restore the old behavior of the dodge windows) no longer works....when it is installed, the launcher hides constantly and changing the behavior in the System Settings does not work until the script is removed.

The "Dodge Maximized Windows" does still work with the same limitations that I mentioned in my answer for 13.10 with two others....

I will edit this answer at some later point if a better solution comes about or the current scripts are edited to work better.

As I said in my other answer, the download link comes right from the lauchpad PPA that was for 13.10.....her is the link:

The old script will not run because of some errors. I modified the original script and now it works. Here it is:

Run the following commands to install the dependencies:

I had to disable the ps command check so you have to manually disable autohide.

Before you run the script, you must disable the "Auto-hide the Launcher" setting in:

Also, if you kill the script you will probably have to go into your settings to disable "Auto-hide the Launcher" before you start it back up.

Additionally, I find the best way to run the script is with an ampersand after the script so you don't have to keep a terminal open like in the following example:

Finally, if you run into unexpected behavior you can always issue a kill to stop the script:

3
Minimize on click / dodge windows in Unity under 12.10
1
How do you Get the Unity Launcher to Autohide underneath other windows while not autohiding when all Windows are un-maximised?
0
Launcher feature "dodge windows" is no longer available in 12.04
0
How to get the launcher in 12.04 to "dodge windows" like it does in 11.10?
0
How to make the Unity launcher evade active windows in 12.04?
1
Unity Panel Oneiric behavior on Precise
1
How can I make the unity launcher pop out in 12.04 as it did in 11.10?
1
how to get the unity bar only hide when a window is maximize
0
How can i get back dodge maximized windows function for Launcher in 13.10?
1
How do I configure the launcher to “dodge windows”?
See more linked questions