cannot rename, delete, create new though I have Create and Delete file access

I run a dual boot pc: Windows 10 and Ubuntu 18.04. I created a folder named Work From Ubuntu inside a NTFS drive named Software (/dev/sda9). After that, I mounted the whole NTFS drive at boot from ubuntu by this command at /etc/fstab:

So, the Software mounted at boot:

Now, the problem is I can't rename folder Work From Ubuntu, can't create files or folder inside it, can't delete. But, I saw the Properties and I had correct access: 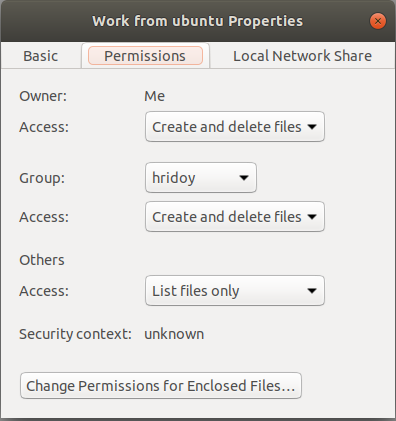 I also tried with:

At last, I applied this:

I am not expert at Ubuntu. All I am doing is searching at google, applied solution from there. I've applied all solution I got. Now, I don't understand what to do to solve the issue.

Having write access is all fine but only works for writable media and yours is mounted as READ ONLY.

You need to umount the partition before you can mount it.

Please don't. Directories 755 and files 644 is more than enough permissions. Again: this will not work on a read only filesystem.

and see if there are any errors. Linux will NOT mount a filesystem it considers dirty. If that is the case you will get a notice about running checkdisk under windows. If so do that and you should be able to mount the partition.

Not the answer you're looking for? Browse other questions tagged dual-boot mount filesystem read-only or ask your own question.

0
Unable to load my external HDD
0
Unable to access “DATA” in ubuntu after installed ubuntu alongside with window 10
0
NTFS mount denied on Lubuntu 18.04