I've got a lot of history in email servers in the cloud (i.e. someone else's computer). I'm looking for some way to make a local backup of all that data, preferably one I could easily access/search.

There are two products I know of that do exactly what I want but they're both Windows only MailStore and MailShelf. There's apparently also a Mac only program called Horcrux. But nothing I can find for Linux.

Thunderbird is not and could not ever be considered a backup solution. There is no way within TB to know it has completed downloading mail (even assuming it ever would). This is on its own absolutely disqualifying. It's not good enough for a backup to simply hope it's done, if it worked at all (which there is no way to check in TB). Thunderbird's cache was never designed to produce authoritative backups, it's just a convenience feature.

There do seem to be a number of Linux console tools that do the first half of what I want (imapsync, imap-backup, more?) but I'm not sure how I'd access/search the mail after the messages were down. There are also enterprise products (Piler, MailArchiva) which are probably overkill, and would be a hassle to setup anyway.

I asked this question on Ubuntu's own forum several days ago but the only solution suggested was to run a local mail server and then sync the cloud accounts to that. It might work, but it seems there should be a better way.

Is anyone out there willing to share the solution they have for this problem?

Using Thunderbird with IMAP should theoretically be able to download everything, but it doesn't actually do it.

This is incorrect, properly configured IMAP accounts do keep a local copy of messages.

To achieve what you want, use Thunderbird with any email service that supports IMAP and either manually save copies to a local folder at regular intervals, regularly backup your Thunderbird profile directory (it's in ~/.thunderbird), or if you are really worried about a malicious actor deleting messages on the server, configure Thunderbird to save 'deleted' messages into a local folder in that account's settings under the "Server Settings" section as shown.

Thunderbird is very reliable and will download all messages, however if you have a lot of email in an account, the service provider may rate limit how much you can download at once. Leave it running for a couple hours and you should be OK. 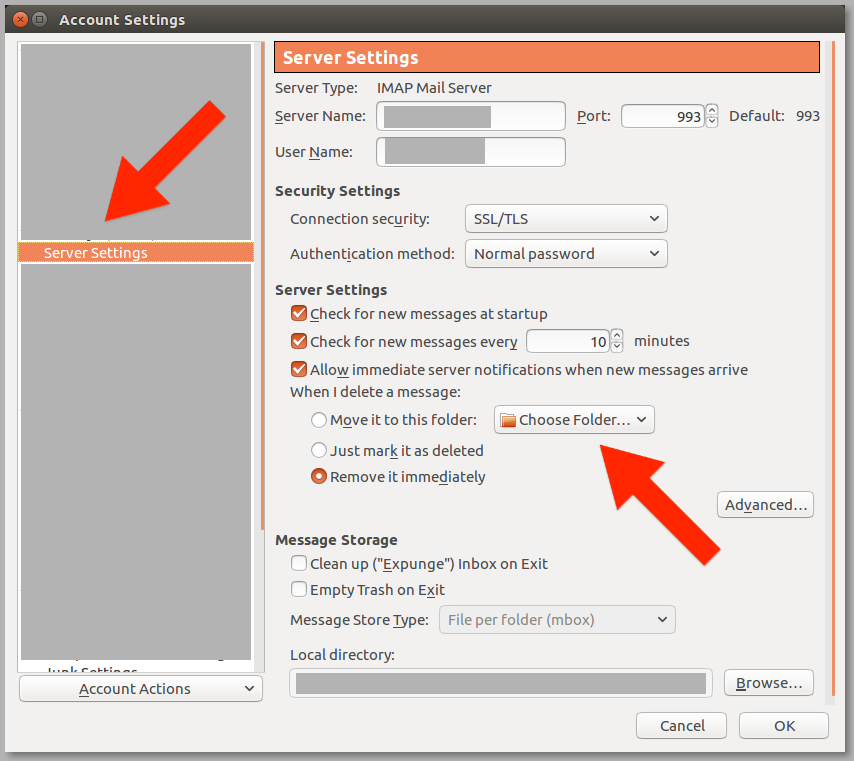 Not the answer you're looking for? Browse other questions tagged software-recommendation backup email cloud or ask your own question.