Error while trying to upgrade from Ubuntu 18.04 to 18.10: "Please install all available updates for your release before upgrading."

When I select upgrade on the update manager, the dialog box disappears and nothing happens. The upgrade doesn't start.

Note- I went through the same procedure this morning on my other laptop and Ubuntu successfully upgraded.

do-release-upgrade fails to upgrade and throws this error:

What can I do to upgrade the system successfully?

On 20.04, they've added a clearer message to the failing sudo do-release-upgrade:

The solution to both of those is to go into:

or access it through the Windows key dash where it is named: 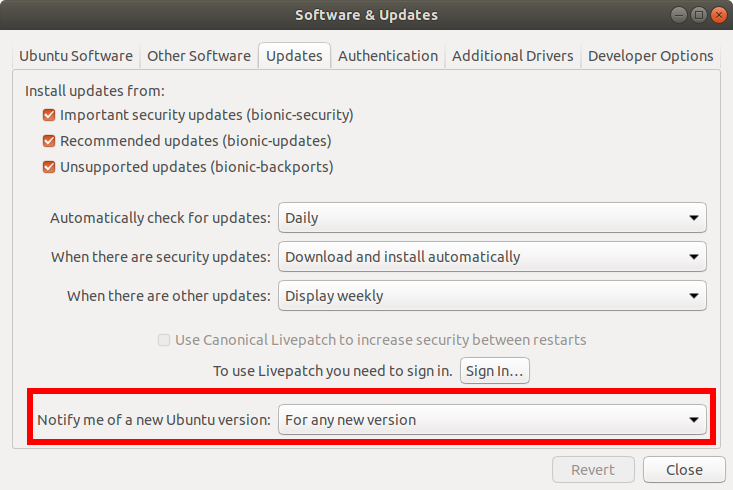 TODO how to do it from the command line only?

For some reason, apt-get missed one of the upgrades and I got:

19.10 to 20.04: manually install any packages that didn't automatically upgrade

I came across this when trying to upgrade from 19.10 to 20.04 and it has the same Please install all available updates for your release before upgrading error message, so I'll also give the solution here for Googlers.

When I tried the usual:

and then do-release-upgrade gave the Please install all available updates for your release before upgrading. error.

The solution was to manually install libomp-dev:

This gave me some conflict resolution options, I picked one of them, and then do-release-upgrade worked!

sudo apt upgrade libomp-dev did not work, only apt install did, upgrade failed with:

do-release-upgrade -d enables development versions, which is not what you generally want

I advise against do-release-upgrade -d unless you really know what you are doing as that upgrades to unstable development versions, which is not something that most users want.

Also note that the upgrade is not released at the exact same time as the 18.10 disk comes out, it seems that you have to wait a few days until 18.10.1 is released before upgrading.

If you try sudo do-release-upgrade before that, you still get:

The ".0" ISO is also generally more buggy. E.g. when I tried the 21.04 ISO the UI was randomly crashing likely due to Wayland: Ubuntu UI screen image freezes randomly during usage after fresh 21.04 install, suspecting Wayland or Nouveau so it's generally better to just wait for the .1 to come out unless you want to help debug it.

I've came across the same issue when upgrading from 18.10 to 19.04. In my case the reason was that I had some packages marked as kept back. In this case they were related to MSSQL.

I simply removed them along with their dependencies:

Then the following sequence of commands led me to the successful upgrade:

EDIT: Later I found this detailed Michael's answer to similar question which might help achieve the same goal.

Install all updates and then perform the system upgrade via Terminal, that should work:

I had the "kept back" issue with some Wine package, but didn't need them, so just did apt-get remove (packages) followed by apt-get autoremove, and it solved the problem.

I had exactly the same issue on my Lenovo ThinkPad X240. After sudo apt-get update && sudo apt-get upgrade in the Terminal, the graphical update-manager (Software Updater) worked properly...

Also manually check if when you use sudo apt update, it shows All packages are up to date.

Because, even if you use sudo apt upgrade, the system may not upgrade everything.

in my particular case, the wine wasn't upgrading at all, and because of that i couldn't successfully sudo do-release-upgrade. So, i removed the wine and then sudo apt autoremove.

After that, i could easily update my release version.

CLOSE VOTERS: Ubuntu 18.04 is the last version of Ubuntu to have a supported 32-bit upgrade path. The upgrade path for later versions was disabled. This is NOT "not an answer" or similar, and is an actively confirmed situation of disabled upgrade paths. 32-bit (i386) Ubuntu is no longer supported past 18.04 for upgrading to. -- Thomas Ward, Ubuntu Core Dev and Moderator of Ask Ubuntu

What version of the OS do you have (32/64 bit)? The output of the terminal on my Lubuntu machine after a use of sudo do-release-upgrade is:

(The command sudo do-release-upgrade -d is for upgrading to the latest development release! And it is possible from the latest release only.)

Ma-TaMa-Ta
1
0
Add a comment  |
Highly active question. Earn 10 reputation (not counting the association bonus) in order to answer this question. The reputation requirement helps protect this question from spam and non-answer activity.

Not the answer you're looking for? Browse other questions tagged upgrade 18.10 or ask your own question.

1
Ubuntu 18.10 to 19.04, end of life version
-2
How to upgrade ubuntu 18.04 to 18.10?
1275
"The following packages have been kept back:" Why and how do I solve it?
35
Can't upgrade Ubuntu 18.04 to 20.04 because of "Please install all available updates for your release before upgrading" error
7
Trying to install a package but apt-get tries to remove all packets on the computer
0
N: Skipping acquire of configured file 'universe/binary-i386/Packages' as ... doesn't support architecture 'i386'
1
apt-get install insists on removing a package I don't want removed!
1
Ubuntu UI screen image freezes randomly during usage after fresh 21.04 install, suspecting Wayland or Nouveau
1
Upgrade from 19.10 to latest LTS: dist-upgrade doesn't solve "package held back" problem