Today I have updated from my Ubuntu 18.04 to 18.10 by software upgrade app ( coudn't wait till tomorrow 😆). It took a bit of time, but at the end of it I was asked to restart my PC. Upon restarting, I get to boot runtime.

The boot log on screen passed numerous processes like gnome manager and stopped on "Started bpfilter". I waited 15 min., but nothing changed. Tried to restart the PC manually two times, but the result was still the same.

The interesting bit for me, after the message, it seems like an instance of terminal is given to me, - I can freely write letters. Though commands like cd, ls are not working. 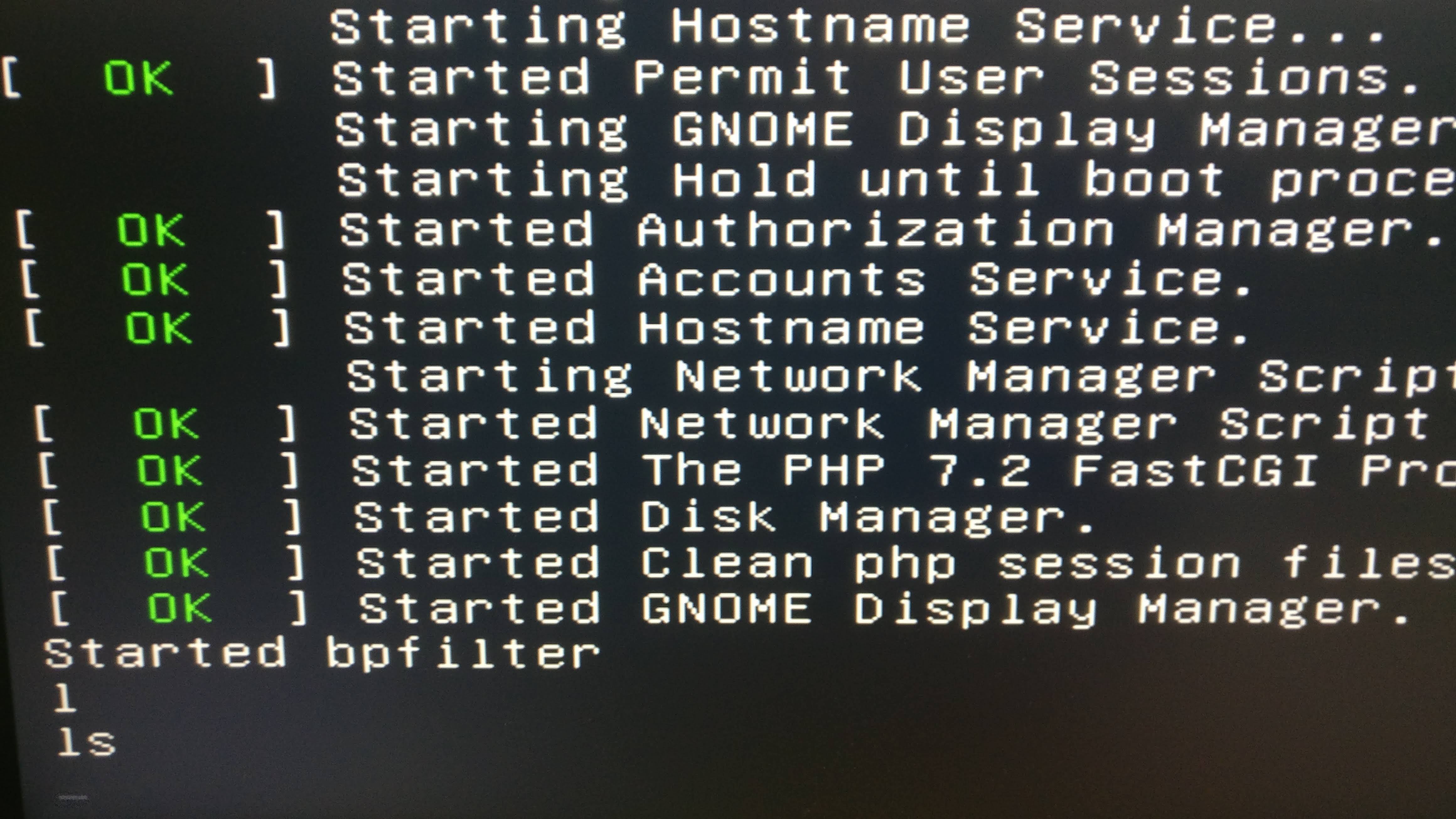 What would be your recommendations to fix this or debug what could be wrong?

Actually, scratch that. Do this: edit /etc/gdm3/custom.conf and uncomment the line:

The issue also doesn't seem to appear in a fresh install of Ubuntu 18.10.

Go here and press the affects me button to raise awareness. Feel free to provide information/logs needed by the developers in the comments. Thank you.

Removing the nvidia proprietary drivers seems to fix the issue. Go into recovery mode by pressing Shift during boot and run sudo apt-get remove --purge nvidia-* Say goodbye to gaming, though. I have filled a bug in Launchpad. You might want to press the "affects me" button. Thank you.

On Ubuntu 18.10. kernel 4.18.0-12-generic, GNOME Shell 3.30.1 - X11, since a Dec 9 update, login kept hanging on Started bpfilter -- I think a possible conflict between systemd and bpfilter (I think managed by the kernel.) The following suggested fixes had no effect on my system:

In Recovery Mode, select <Enable Networking> (this allows APT to connect online while in Recovery Mode,) then select <Drop to Shell Prompt>. Run (as root -- enter whoami to verify)

to install SLiM. To switch the display manager to SLiM, in Recovery Mode run (as root):

then select SLiM, then 'restart now'.

SLiM will probably be a temporary recourse; with Ubuntu's continuing development I think systemd will be integral, so I've kept GDM3 and LightDM installed, in case a future kernel or systemd update fixes this issue.

This boot hang seems to be an upstream issue reported by users on other distros besides Ubuntu as well, Arch Linux especially.

I just had the same set of symptoms with the best results from the previous post:

Had the same problem. For me the reason was that I had no space left in HD. Running a shell in recovery mode to delete some files solved the problem

Ok, I might get downvoted to oblivion and get my answer privilege taken away because this is only an improvement (Or I would like to think so) but I have to answer this.

Note: this is an improvement over @zanna 's answer in this same thread, but I don't have comment privilege yet so I'm posting this as a separate answer.

If you have followed @zanna 's answer in this thread and you are using SLiM display manager, and you have decided you don't like this very much/would like to go back to gdm3 (No Unity dock and takes away most of the useful functionalities in Ubuntu, you cannot even tap-to-click without a lot of tinkering around) maybe this will help you get back to gdm3.

The 'Started BPFilter' bug happens mostly in Ubuntu 18.04 (and I've also seen a few cases in 18.10). Go on, Install SLiM as @zanna has suggested and check if that works.

Note 2: there are a couple of answers in other thread suggesting you use LightDM. It has not worked for me. I reached the login screen and I was forever re-directed to the same screen even if I input the right credentials. You are free to go play around using the command line from there (Ctrl + Alt + Del or something) but here is a thread on why that wouldn't probably work.

Thread (Even LightDM doesn't work for me, Is there no respite!): [https://www.reddit.com/r/Ubuntu/comments/9hagsd/ubuntu_1804_just_keeps_returning_to_login_screen/]

Note 3: (If you have come this far, I take it you have also gotten rid of your Nvidia Drivers, which for most of you did not exist to begin with! [Yeah, I did the purge too only to find they don't exist]).

This will ask you to edit a text file and change the version from LTS to normal (Follow the error message!).

Once this is done, go into recovery, and do:

That is it! Tada! Everything works now!

My Ubuntu is 18.04.2 LTS, and I got the exactly the same problem. I tried many ways searched from google but failed.

The final solution for me is (which I don't know why it works):

Well, for me (ubuntu 18.04), it turns out to be the opposite of others. I had to set the WaylandEnable value to true to be able to boot the system.

I had the same issue on Zorin 15 - which is based on Ubuntu 18. Fortunately, I can still SSH to the box.

I had to make the lines for banner, message and comment again and it did not hang anymore.

If you are using ubuntu 18.10 on VirtualBox and have been playing with settings of the virtual machine, it might help to set Settings->Display->Enable 3d acceleration back on.

Installing LightDM worked for me. I'm on an iMac late 2013 with Ubuntu 19.04 and kernel 5.0.0-23-generic. I installed SLiM first, but since I run a two-monitor setup, the login screen was just messed up.

Not the answer you're looking for? Browse other questions tagged boot 18.10 firewall or ask your own question.