I already knew that Ctrl+Shift+u would allow to type a character by giving its Unicode hexadecimal representation: an underlined u appears, you type the code and hit Enter.

Now I've just noticed that Ctrl+Shift+e lets an underline e appear, in a very similar manner, but I can't figure out what it does.

Does someone know? Thank you in advance.

It produces an underlined "e̲", if you type "joy" after it (so it looks like "e̲j̲o̲y̲") the whole word will be underlined. On pressing a whitespace entry key, like spacebar, you should then get the "e̲j̲o̲y̲" text changed to "😂" (the emoji character selected by your current application). 👍

And change it on the Emoji tab as the picture bellow 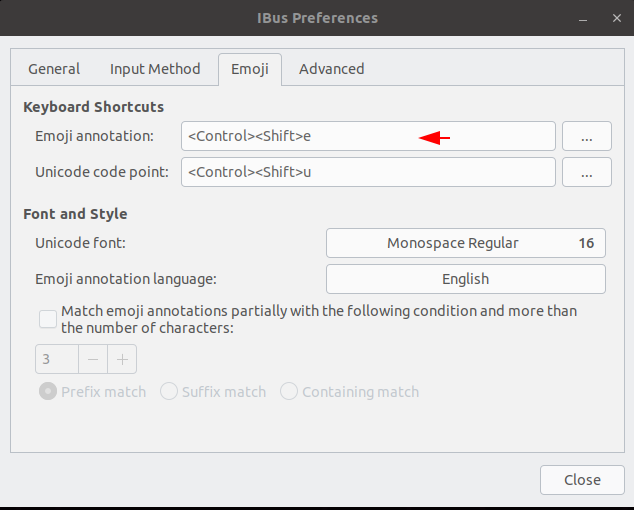 Based on other answers here, I discovered that this keyboard shortcut defaults to Ctrl+. for anyone running Ubuntu with the KDE desktop environment.

using the ibus-setup command, I was able to confirm that, on my system, this emoji entry shortcut was set to <Control>period which I found myself accidentally hitting occasionally. Changing it to Ctrl + Shift + e will likely make this a lot less likely for me to accidentally activate

2
What is happening when I type ctrl+shift+e, then type and underlined text appears?
75
How to insert an emoji into a text in Ubuntu 18.04 and later?
51
How to disable ctrl-shift-e keybinding from showing eEEEE and loading Emoji options
8
“Emoji Choice” popup (Ctrl-Shift-E) stopped working in 20.10
0
Is there a comprehensive list of "typing" keyboard shortcuts

9
Text selection CTRL+SHIFT+Cursor Keys?
3
Unicode composition on Xubuntu 16.04.1
1
What does "CTRL + SHIFT + H" do in compiz?
3
How can I type a diameter symbol in Kubuntu Kmail?
0
Ctrl+Shift+Left or Ctrl+Shift+Right doesn't select words in Ubuntu 20.04