The first was with Chrome, everything appeared in what I would describe as 8 bit colors. This occurred after I installed a new Nvidia graphics card and nvidia driver 390. I was able to resolve this problem through Chrome settings relating to "GFX Hardware Acceleration" which I don't really understand. 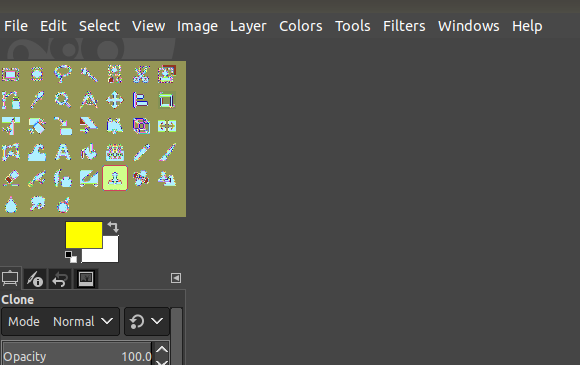 cropped up at the same time, this time in GIMP. The toolbox appears in what I would describe as 8 bit colors. I've posted a screenshot of it.

I also experienced odd problems with Shutter, a screen shot program, at the same time. When I try to make a screenshot, the screen goes black.

Later, I reinstalled an older NVS 300 Nvidia card that required the older 340 Nvidia driver, however these odd problems have remained. This NVS 300 is what is currently running, split to two monitors.

I don't find a way to post such a question on Gimp forums, and I suspect since it affected more than one program it may be a video issue.

Window Manager (currently) Metacity. Changing this to other settings hasn't made any difference. I have yet to figure out how to tell which version.

I am on Bios version 15, the current version is 17, however Dell only provides this as a windows .exe file which has no chance of working under Linux, and no, I'm not going to try to run a bios update in Wine. So the bios is what it is. The box is a Dell Precision T5500 with two Xeon processors.

I'm closing this question because, after I posted it, several other very serious problems arose with this computer and I'm going to replace it.

TL:DR: I was able to deal with this issue in Chromium by looking into settings for GFX hardware Acceleration, but was never able to resolve the question about graphics in GIMP and Shutter.

Not the answer you're looking for? Browse other questions tagged nvidia graphics gimp or ask your own question.