How to make an USB Ubuntu installation more compatible with different computers?

I always have a keychain USB-drive with me and noticed a while back that Ubuntu can easily be installed on it. I've successfully used this drive to test other people's hardware for them and copy files from dead Windows installations or just check my own emails in a secure operating system while travelling.

So far, this method has worked very well, but not every single time. Some hardware will recognise the USB-drive, but refuse to boot from it. On others, the system boots, but has serious performance/display issues, which can make it unusable.

I've tried to compile a list of all compatibility options that have helped to increase the rate of a successful boot and operation of this drive, but I am not sure what else could be done to prevent issues or what would be other useful choices in general in this case. So far, I've noted down these points:

As well as two small tips on the side:

Are there other setup options that would be beneficial in this scenario?

Would you suggest other kernel parameters or system configurations that could increase compatibility while not limiting the usage on such a minimal installation?

Perhaps one computer uses UEFI and the older computer BIOS. If you would like your USB drive to be able to boot from multiple computers, both BIOS and UEFI: 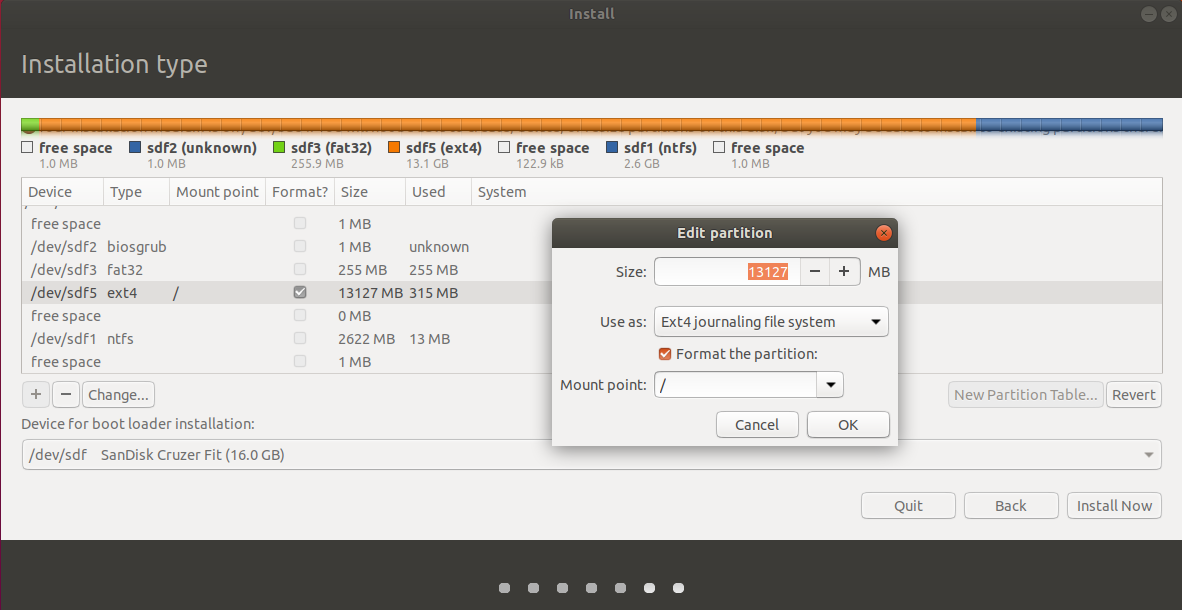 Don't touch any other partitions (unless adding a /home partition).

A second method to make your drive more comparable with a greater number of computers, is to create a drive as suggested above, then divide the expanded partition into parts, (sdb5 in this case).

You can then install Ubuntu on one part and a lighter version(s) of 'buntu on the other(s).

You can add a few OS ISO's if you wish:

Not the answer you're looking for? Browse other questions tagged system-installation usb kernel uefi live-usb or ask your own question.

0
How do you create a persistent Ubuntu USB so I can boot anywhere I want
3
Can I convert a live Ubuntu USB to one with persistent memory?
2
How to Make BIOS/UEFI Flash Drive with Full Disk Encryption
2
How to run lubuntu minimal from usb with persistence?
3
Is there an alternative to mkusb to install Ubuntu on a portable SSD that works with both UEFI and BIOS boot methods?
2
How to boot Ubuntu MATE desktop-arm64+raspi3-ext4 from multiboot USB
2
Install Ubuntu on USB drive
1
How do I create a Multiboot USB that is compatible with both BIOS and UEFI?
0
Installing Ubuntu from USB stick onto itself
1
Ubuntu on USB Flash Disk Drivers Portability
See more linked questions