I'm new at Ubuntu so I don't know very well how to use the terminal in order to download and install programs that aren't in the software center. I've tried without success downloading and installing Handbrake.

Could anybody help me, guiding me through the downloading and installation of Handbrake?

The former contains stable releases, which are updated about once a year. These releases tend to be rather out-dated when their end-of-life is approaching. The current stable version (0.9.8) was released on 2012-07-18.

The latter contains nightly builds, which are updated daily (or nightly, as it were). These are of course less stable, and undocumented to boot, but they are good software nonetheless. Additionally, as the stable release ages, the developers tend to start recommending users to try the nightly builds instead.

To add one of these to your sources, simply run:

depending on which you want. To install HandBrake with the GUI, run:

Alternatively, if you would prefer the CLI (command-line interface) over the GUI, replace the last line with:

The handbrake ppa has been updated with the latest version of handbrake.

Note: You can still install the latest version of handbrake on Ubuntu 13.10, by manually downloading the appropriate .deb files:

I managed to install them on my Ubuntu 13.10 amd64 without issues

If you want to compile it from source, here is what worked for me:

HandBrake is available in the Ubuntu Software Center, search for it 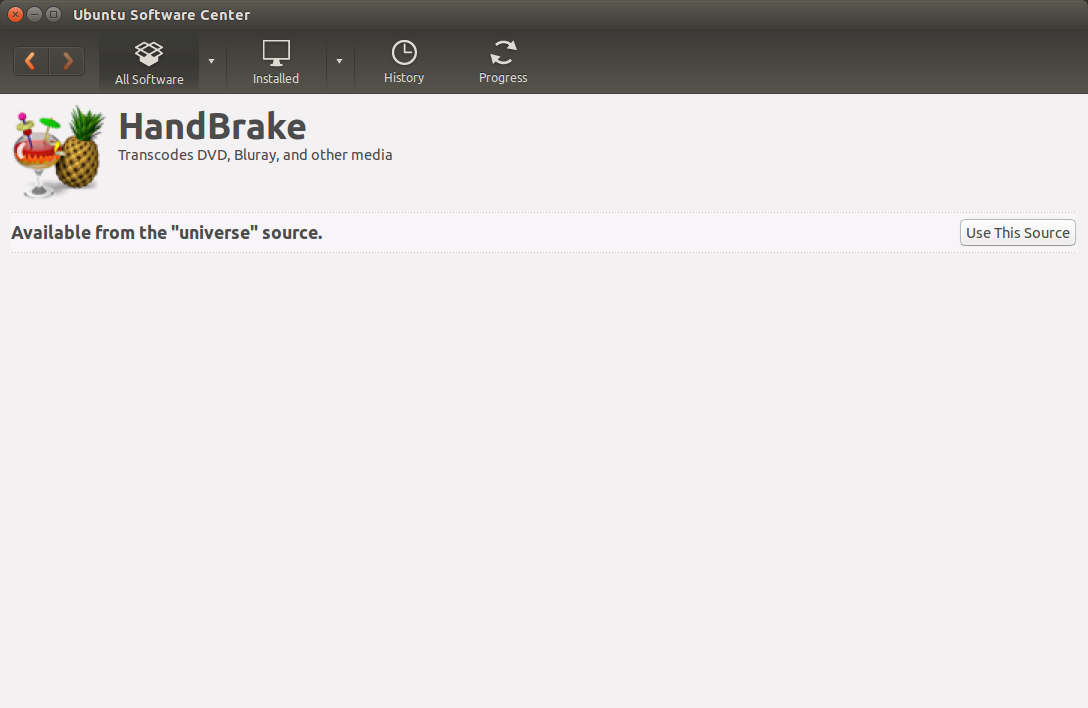 If you have not made any changes to your Software Sources, you should be directed to an install page instead of what is in the above image. To add the "universe" source to your sources, go to Edit>Software Sources and check under the tab Ubuntu Software the "Community-maintained free and open-source software (universe)" and close. 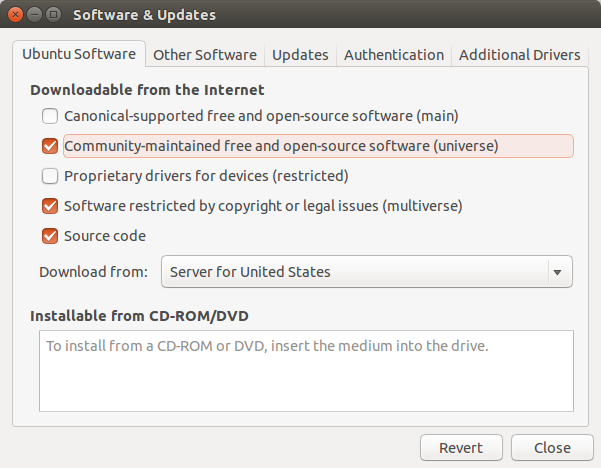 Or just click the button to use that source.

Handbrake doesn't have any ppa support in 12.04. If you've tried adding the PPA's and still get the error, this solution resolved the problem for me

You need to do the update process twice, first time to remove the invalid ppas from the hit list, and the second time adds the correct PPA.

I had to add these packages to compile on Ubuntu 12.04 LTS:

The binary is then in build/gtk/src (ghb), and you can run it directly without using makeinstall.

None of the previous solutions worked for me with Ubuntu 13.10. The one involving "bzr" fell over with:

However I managed to get it working by downloading directly and installing using dpkg. (taken from http://ubuntuhandbook.org/index.php/2013/10/install-handbrake-in-ubuntu-13-10-saucy/)

Please tell me in the comments if you know what library I'm missing for the "bzr" option to work. I've got a fairly new Ubuntu install.

Not the answer you're looking for? Browse other questions tagged command-line software-installation downloads or ask your own question.

48
Only MKV format available in HandBrake
9
How to transfer a DVD to my hard drive
2
Cannot install Handbrake in 64-bit Ubuntu 12.10
1
video gets corrupt after converting ogv to any format using ffmpeg
1
Why can't I install a PPA?
0
Random crashes after Nvidia instalation, even before boot!

1
How to Download files from Ubuntuone to Windows
0
Install indicator-cpufreq as a package through web
2
How do I download Ubuntu using BitTorrent on Windows?
0
How can i do a "complete" reset of Ubuntu 14.04, WITHOUT using a disk or USB drive?