Is there something I can do to regain control? I have read threads about "nautilus" and "nemo", but I a) don't know one from another and b) just use what came with the upgrade from 16.04. Anu actual help will be appreciated.

Perhaps the issue can be solved, and someone may bring a solution to the issue, but to my knowledge, I fear that may not be the case.

Ubuntu 18.04 does supports desktop icons. They support this to the extent that the current Ubuntu version, 18.04, which uses Gnome Shell 3.28, ships with an older version of Files that still features support for drawing desktop icons.

There is probably not a lot you can do. Switching to nemo or caja will, besides from being quite complex, likely not solve your issue. Both file managers are forks of nautilus, and thus basically contain the same code to handle icons on the desktop.

An options to work around the issues is to change your working habits, i.e. turn desktop icons off and learn to use the dock to launch frequently used programs, and "search" in Files or the Activities overview to quickly get to your documents.

Alternatively, if you do not want to let go of your workflow based on having icons on your desktop, another desktop environment such as KDE or perhaps xfce (I doubt for the latter) may handle your configuration better . Budgie is yet another desktop, but it is strongly based on Gnome components and thus may also be problematic.

I wrote the iconic script to give control over which monitor icons are placed on. It also insures icons don't get placed into the "black hole" that exists when monitors of different resolutions are used.

Here are a few screenshots of iconic to give you an idea of how it works. 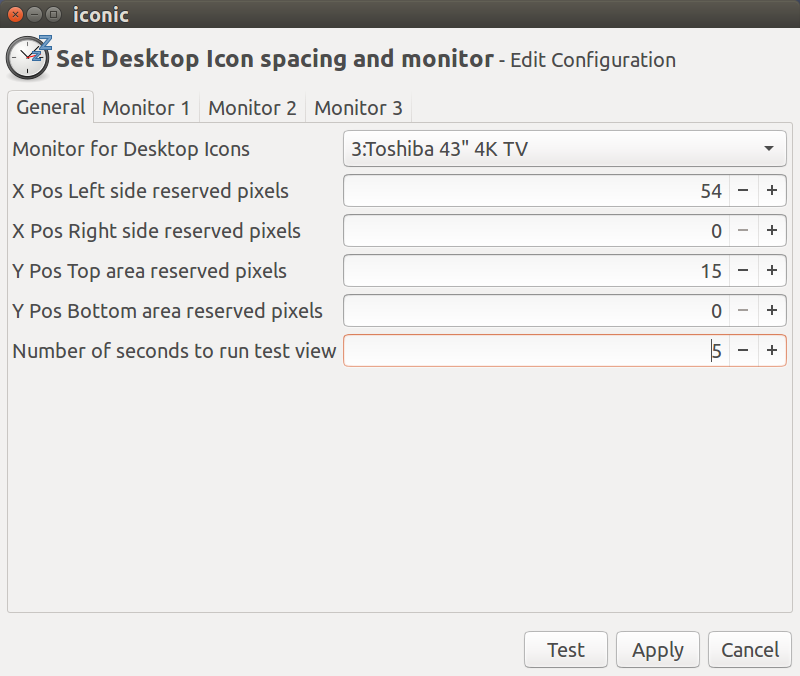 On this notebook tab you can also specify the number of seconds a test will last. Press the Test button to place icons on the Desktop using currently defined settings for number or columns, rows and reserved screen space. 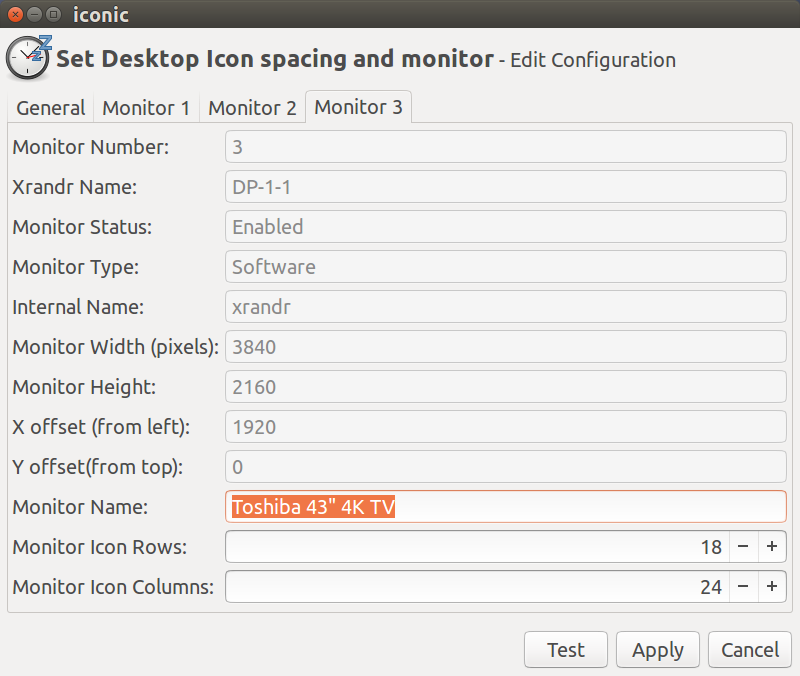 Assign a user friendly name to each monitor. Set the number of rows and columnss to utilize for icon placement on each monitor.

Use the Test button to view what icon placement after number or columns or rows are changed.

Not the answer you're looking for? Browse other questions tagged multiple-monitors display icons desktop-icons or ask your own question.

5
Ubuntu 11.04 DUAL monitor issue
15
Is there a dynamic-multiple-monitor friendly desktop environment available for Ubuntu?
0
Two display monitors instead of built-in display
1
Icons on second monitor positioned above the screen on second monitor UBUNTU 17.10
9
20.04 - How to change the size and appearance of desktop icons and the way they are handled?
1
Unable to properly adjust display arrangement for portrait monitor next to landscape monitor