Ubuntu 18.04.1 installs OK and appears to run fine (with me working, typing, installing and removing software), until it crashes after some random time (after 45min +/- 30min).

The crash is a complete freeze (mouse does not move, TCP/IP connections become frozen and break, Ctrl+Alt+Del does not respond, has to be rebooted by pressing the power button for 5 seconds).

There is no abnormal entry in /var/log/syslog or /var/log/kern.log before of after the freeze.

So, it is just a misterious crash "freeze", with no log/trace that I know of.

(Edit: 2018-08-25 I enabled SysRq, but network services are frozen too, so I cannot ssh remotely and ask for SysRq, and keyboard Alt+SysRq+command seems frozen too).

On the 1st day, it had apparently the same problem running the Windows 10 that came with this PC.

But the problem disappeared once I upgraded to Windows 10 1803 (with all cumulative patches that were prompted, and multiple reboots). Now its completely stable under Windows 10 1803.

Seems like a "new hardware" problem under Linux, that Windows has overcomed recently.

What should I do ? Should I try to use an upstream kernels with Ubuntu ? (Which one ?) (Is there any USB pen version of Ubuntu that I can run all day with a newer kernel just to see if the problem is from the kernel ? Should I go to launchpad and open an issue ?)

Booted in console mode (GRUB option systemd.unit=rescue.target), turned on network manager and WiFi from the command line as root (see https://help.ubuntu.com/community/NetworkManager ), and copied some files over the network for some hours.

Installed the nvidia-driver-390 proprietary drivers, and switched to NVIDIA with the commands:

The problem remains the same with nvidia-driver-390 proprietary drivers.

Swicthed back to intel, and blacklisted the noveau kernel driver:

The problem remains the same with intel video drivers, with noveau disabled.

It did not recognized the WiFi adapter, but it seemed stable under GNOME desktop mode for a few hours (I let it run for 2h30m while copying some GB of files through wired Ethernet to disk). (Later attempts to go back to this Debian testing, showed that it crashed/freezed frequently also.)

But, filled with new hope, I decided to try an Upstream kernel ( see https://wiki.ubuntu.com/Kernel/MainlineBuilds )

Then I tryed kernel 4.18.5-generic amd64. It seemed to run OK for some hours (more than 2 hours) but then froze and rebooted. More tests on the next day, and the problem seems to remain (and always crashes on reboot). (I tryed to disable WiFi, and using only Wired Ethernet, but the problem eventually happens again. Side-note: I seem to loose Wired Ethernet by DHCP after a hot reboot).

(Side-note 2: Meanwhile I de-blacklisted the noveau driver as it was causing related timeout errors in /var/log/kern.log. The "sensors" utility reports 511ºC temperature on the 3D adaptor :-)

Edit 2018-08-26 kdump: I tryed to configure kdump (as in https://help.ubuntu.com/lts/serverguide/kernel-crash-dump.html ), but, when I test it in graphic mode, I get exactly the same problem described in kdump doesn't log crash (system freezes, no messages, no reboot, no crash dump under /var/crash/ ).

If I trigger a kernel crash in console mode with

then I see the crash messages on the console, and they are partially recorded on /var/log/syslog on the next reboot. Still no crash dumps under /var/crash.

I downloaded the Ubuntu 18.10 daily build at http://cdimage.ubuntu.com/daily-live/20180827/cosmic-desktop-amd64.iso and used it as a live USB pen for a few minutes, but crashed/froze as usual.

(PS: In the 18.10 GNOME control panel, I could not see which graphics card was in use. It crashed/froze when I asked for the "Information" item).

Is there anyway to use a limited VESA graphic mode ? (I've tried Force VESA driver in Ubuntu 16.10 without success).

Try to use the kernel parameter: intel_idle.max_cstate=1

In order to save energy when the CPU is idle, the CPU can be commanded to enter a low-power mode. Each CPU has several power modes and they are collectively called C-states or C-modes..

The idea of these modes is to cut the clock signal and power from idle units inside the CPU. As many units you stop (by cutting the clock) as you reduce the voltage or even completely shut down to save energy. On the other hand, you have to take into account that more time is required for the CPU to “wake up” and be again 100% operational. These modes are known as C-states. They are usually starting in C0, which is the normal CPU operating mode, i.e., the CPU is 100% turned on. With increasing C number, the CPU sleep mode is deeper, i.e., more circuits and signals are turned off and more time the CPU will require to return to C0 mode, i.e., to wake-up. Each mode is also known by a name and several of them have sub-modes with different power saving – and thus wake-up time – levels. 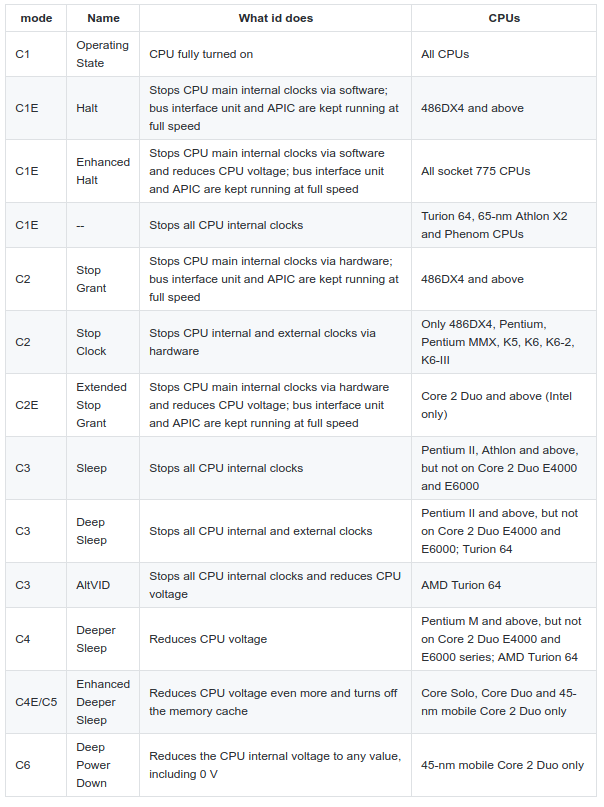