It all started when I installed Evolution on my Ubuntu 16.04 but I now believe the heart of the issue is elsewhere, very likely GPU driver related. I absolutely need to remain on 16.04 and would hate to have to get a fresh install. I am looking for a procedure to clean this up.

Screenshot of what it looks like and the available drivers 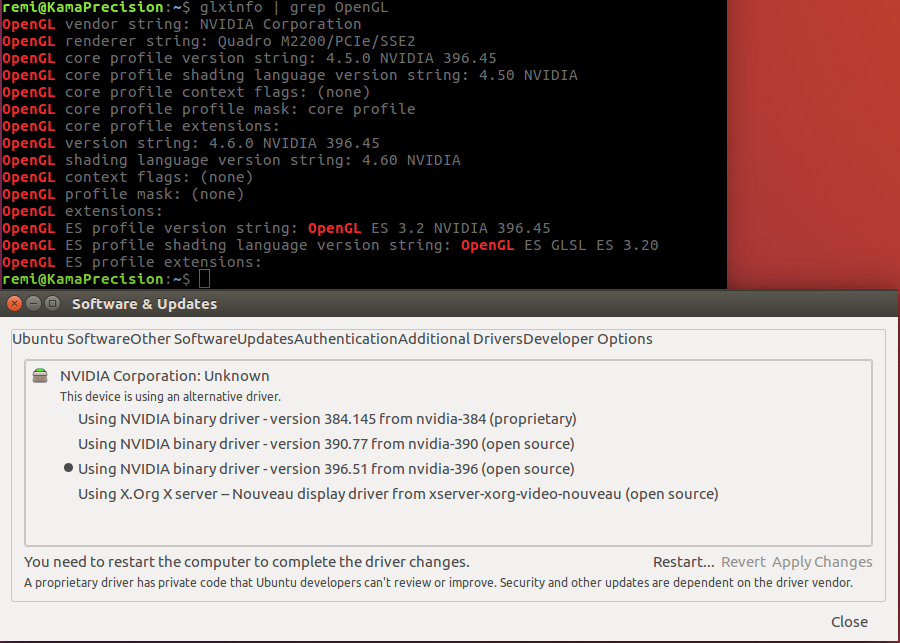 What I tried before that

A) Trying to change the graphical drivers
I have tried all of the available drivers through the "additional drivers" interface. It mostly doesn't change anything, except for the version 390 that completely screws with one of my screens (I'm on a laptop connected to 2 screens). With my current setup, the graphic card seems to be recognized well (cf screenshot).

B) Reverting everything that was done when I installed Evolution through apt-get
Since all of the steps are fresh, I decided to document them here for future reference and feedback too. The only enhancement I got after doing them is that the Ubuntu wallpaper went from full black to its normal purple default.

1) Check what was installed and remove (purge) it

4) Upgrades are written as:

C) Creating a new user
Actually, it was even worse on the new user, I had graphical bugs when moving the terminal window with the mouse, I felt like I was back on windows 95... I don't have these on my default user. Since I created a temporary account for this test, I assume the CPU was also doing stuff needed on the first account usage, hence the bugs. This might indicate that the GPU is not used at all.

What ended up working

Instead of going back to a stable state by hand, I ended up relying on dist-upgrade solve my broken system. As noted here it might be safer to do this in recovery mode:

Rebooting then reinstalling the nvidia drivers (the actual version needed for your system might be different, can be checked here and here):

Reboot one last time and hopefully things should be ok.

Not the answer you're looking for? Browse other questions tagged drivers apt nvidia graphics evolution or ask your own question.

11
How to repair Ubuntu installation after interrupted dist-upgrade without losing any custom settings?