This question has been asked several times, but the standard answer does not apply.

The system comes with this question at user login. A simple Cancel is fine for Dropbox to do the thing it is supposed to do. Occasionally it asks 3 times, somewhere in a login session.

The standard advice on the forum is to change the according line in /usr/bin/dropbox into PARENT_DIR = os.path.expanduser("~"), but that is already how it comes for the last few years. I install each release from scratch on alternating root partitions, so no left-overs. /home is on a separate partition, so that's a place for a possible left-over. The message has recently been absent for about 3 weeks, but after the latest kernel update it's back. Note that the system now asks for permission to execute /bin/sh, no longer for /usr/bin/dropbox.

Your help would be appreciated.

fixed the problem for me. I recall that I've recently moved my Dropbox folder from NTFS partition symlinked in my home folder to physically be in my home folder - and probably didn't set the permissions after it.

The right answer is you had some file in sync folder (through symlink maybe) which Dropbox had no access to.

I think I finally solved the problem. In my case the message was generated by a temporary Dropbox script in /tmp that was tying to give universal access permissions to the files in my Dropbox. The problem was a file owned by root in my Dropbox tree that Dropbox could not update.

I solved the problem doing this (I assume $HOME/Dropbox y your Dropbox folder, which is the default. Change if appropriate).

1) As root, be sure you are the owner of all the files in your Dropbox:

2) Give owner's read and write access to all files and directories in your Dropbox:

Watching the terminal when running "start dropbox", I see also the following advice:

This solved the problem for me, without having to give Dropbox sudo powers to do whatever it wants.

If Dropbox finds files in its folder that aren't owned by your user, it will try to run a script with super user privileges to change the ownership of those files to your user.

If you click Cancel, Dropbox won't run the script but you'll continue to get the popup because it will continue to detect the problem.

If you're able to confirm it is Dropbox causing the popup, then the solution is to enter your credentials and let it run the script. More details below.

I just got this same popup, but not at login: 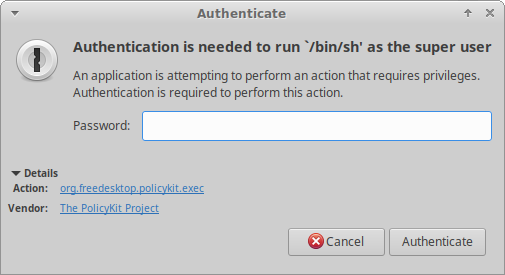 I expanded Details and then I searched the web for org.freedesktop.policykit.exec which pointed me to pkexec.

Looking through my processes for pkexec, I found:

So of course I was curious what that file was doing:

It looks like Dropbox must have detected that there are some files in my Dropbox folder that aren't owned by my current user.

I used find to confirm:

Sure enough, looks like some of the files aren't owned by my user:

In theory Dropbox shouldn't have any problem syncing that file since it's world-readable, but at least what they're doing makes sense.

I also noticed that while Dropbox was syncing I saw errors like this, which seems to be an additional confirmation:

Last but not least, I'm going to put this here because I had trouble searching the web for this problem:

Authentication is needed to run `/bin/sh' as the super user

I had this problem a while back. To fix this problem, here are the steps I took. These commands were executed from a terminal CTRL+ALT+T

Then you can start dropbox again. It will require you log back into your dropbox account, but after that it should work correctly without prompting you when it starts.

Not the answer you're looking for? Browse other questions tagged permissions 18.04 dropbox or ask your own question.