GIMP 2.10 (snap version) doesn't allow me to open the /media directory, so I'm unable to access my external USB drive. I get the following error message:

There's obviously something I'm missing in terms of configuration, but I can't find a similar question posted yet.

I was pointed to the solution to resolve the problem:
How do I get the latest GIMP version available?

You need to give the snap GIMP package explicit permission to access external media once installed:

Why we have to do this extra step, is alluded to by N0rbert:

How to get access to USB-storage from the application installed as Snap?

"...if the application does not have auto-connect of removable-media we need to connect it manually"

My question is why would an application package be created without the ability to access external media by default?

I have observed that snap packages are generally less reliable than apt packages which means that I often install a snap package, and then I have to uninstall it because it didn't work properly. So I guess that not enabling removable media support on some snap packages adds another layer of security to the snap package that the packager thought it needed.

If you need GIMP to have full access to external media (such as USB flash drive, SD/MicroSD card, additional mounted hard drive and so on), run the following command: 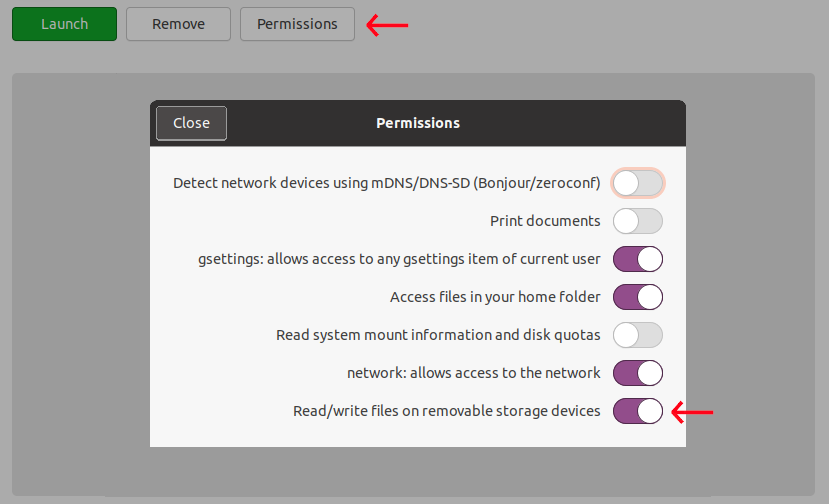 Click the permissions button and then toggle the Read/write files on removable storage devices slider from Off to On as shown in the above screenshot.

Not the answer you're looking for? Browse other questions tagged usb permissions snap gimp or ask your own question.

94
How do I get the latest GIMP version available?
22
How to get access to USB-storage from an application installed as Snap?
1
How can I grant GIMP access to all the contents of my home folder?

5
Insufficient permissions to access USB/Flash drive after UID change
22
How to get access to USB-storage from an application installed as Snap?
0
Gimp snap Help not working
2
VLC (snap installation) - allow access to custom path (custom interface)
1
How to install the Darktable plugin for GIMP 2.10
8
How do I access mounted hard drive with a Snap application?
0
can not access USB shared drive from Ubuntu to Ubuntu 20.04