How to disable the grouping of windows on the launcher?

For example, I ran Firefox and opened Askubuntu. Then opened some link in a new window. As a result, I have two windows of Firefox and one icon of Firefox on the launcher. I want to have an icon for each opened window.

Research shows there are a lot of people asking and wanting this feature that is being asked about. There is bound to be a working solution. Searching related questions here on Ask Ubuntu gives reference to gnome environment or others which may give useful building blocks for working it out for Unity. May be time to accept there is not an easy solution for ungrouping windows in Unity launcher icon.

"Alt and `" (Button above Tab) switches windows of app as does "Super and w" All credit to Jo-Erland Skinstad who answered this Ask Ubuntu question. Depending on the mouse (if any)being used any keyboard shortcuts can be easily mapped to one button whether it be on mouse or keyboard which would give one click to show open windows and then one more left click to select which would make window switching slightly easier. To remap keys look here or xboxdrv would be another option- "It is also possible for xboxdrv to read input data directly from an event device, this allows the use of the configurability of xboxdrv on regular PC joysticks, keyboards and mice and thus lets xboxdrv serve a similar purpose as joy2key. See the option --evdev below for more information." as long as hotkey is not part of shortcut. Sure is doable with a little research.

Additionally an Ubuntu Forums user has filed a request for what you ask using Brainstorm. Other Ask Ubuntu questions mentioning editing or making quicklist menu/icon for application may be possible for an advanced user but can only find working examples for gnome environment and not unity like shown here and they do not use Firefox as a working example. The Ubuntu Forums question that is referred to can be found here and the Brainstorm request/idea can be found here So go get voting! 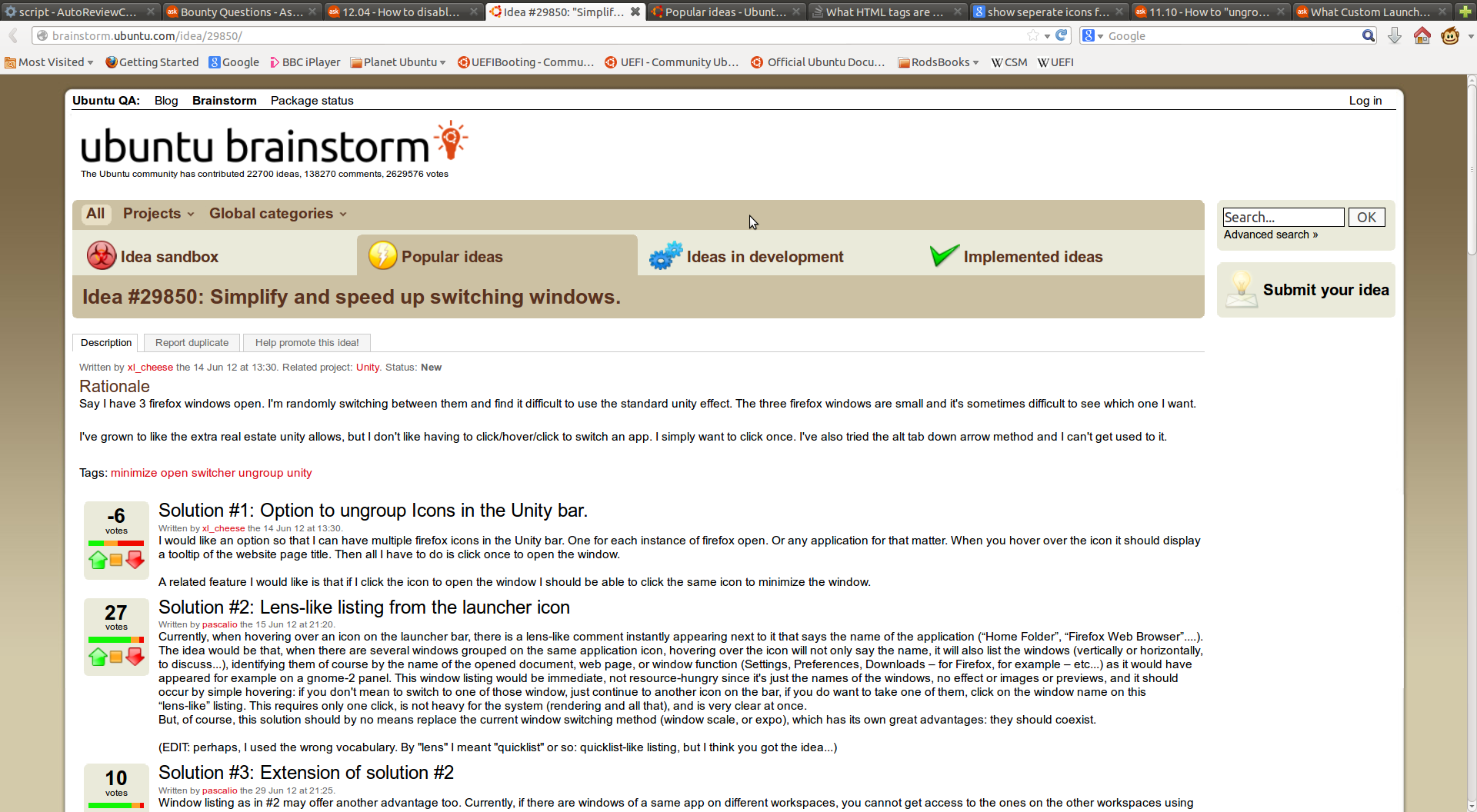 If you want a taskbar you could try tint2. works great for me.

From Webupd8 : Tint2 is a lightweight panel/taskbar intentionally made for Openbox3, but should also work with other window managers such as Gnome. 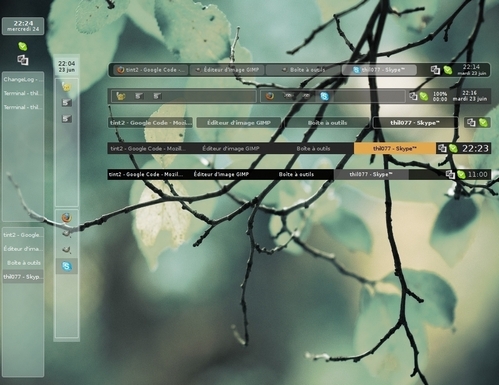 If you'd like to customize the position and the look and feel, there's an article on WebUpd8 with a GUI customizing tool here : http://www.webupd8.org/2009/09/how-to-install-and-configure-tint2.html

As much as I love the fact that people complain to me instead of Unity (when it was actually Unity the one with the issue), times have changed.

I am actually with the people that want to give the user the option instead of the platform removing it, but we need to be up to date with this:

So, 5 to 9 years ago there was no way of disabling it (Please read the end of the answer for more). The idea behind this was for cases where you needed to open not 2 Firefox Windows, or 4, but 10 or 20. Now imagine having the Unity Launcher with the common icons it has plus 10 to 20 firefox icons there. You would see 10-20 firefox icons, all the same, and would first have to guess which one takes you to the webpage you wanted to go. Secondly, if you wanted to close them you would have to go, one by one and start closing them manually.

So we have 3 issues:

With this 3 issues an idea came to mind. Group them together in a single icon in the Launcher that represents the application in use and offer in a one right click solution, all the options needed to cover the rest of the issues.

Between 12.04 and the soon to be release 13.04, there has been much work put out to not only solve this 3 issues, but to help the end user work faster and easily, with just a minor learning curve. The end result (For 13.04 for example) is an icon that can deliver many windows of the same application and offers the possibility to change between them in an almost one click solution. Of course, the option to disable it was never added (Even on 16.10).

Some of this images can show you an example: 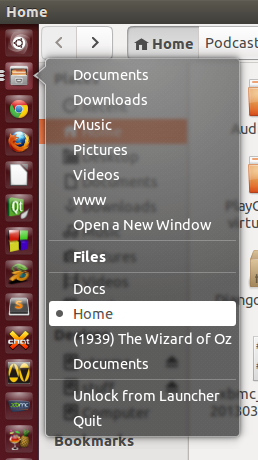 Here you can see the same example. Many Chrome Windows opened. Each with several tabs and each one showing the exact webpage where I left them: 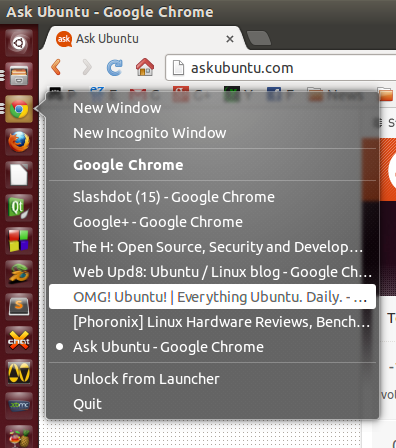 Lastly, your example, Firefox. Here you can see several Firefox Windows opened. And each Window is shown when I right click on the Firefox launcher icon: 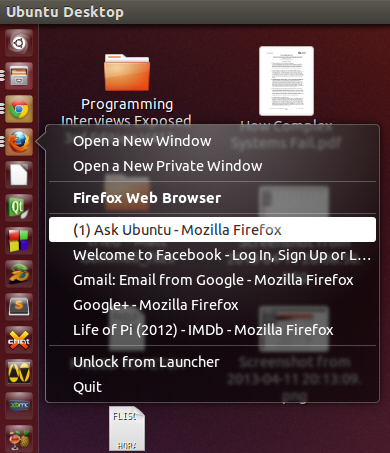 Not only can I manage several windows of the same app quickly, but if the need arises, I can close them all with the "Quit" option in the launcher icon's context menu. Saving me time in case I had 20 Firefox Windows opened.

I also felt the pain when I could not access my multiple windows in an easier manner, but after using this method, I found it was easier, quicker to search in, since I did not have to go through many launcher icons to guess which one is the one I was looking for, neither did I have to scroll down the Unity launcher between 20 Firefox Windows, 30 Chrome ones and 40 Nautilus ones just to get to the one I needed. Overall, it saved me time when I needed to find the correct one and work on it.

As you can see, it focused itself to be more productive to the end user, with just a slight touch in the learning curve.

Now, if you actually wanted to have the option to ungroup them, it would involve, downloading the Unity source and any dependencies related to it. Modifying the code so you could actually ungroup them, by default or as an option, compile this and install it on the system, making your Unity be able to ungroup them as you wish. But in this case, I would ask, is it better than the solution provided by the Unity Development Team?.

This of course is left to each person to decide on how they like to use their system. In my humble and honest opinion, I feel the change made by the Unity team, solves several issues I had on 11.10 or even on 12.04 related to this, and the way it works on 13.04 is much better than I anticipated.

Currently there is no straight and specially easy way of disabling this option. Now, with all of this said, I do stand with the rest of the comments below in that, there SHOULD be an option to disable this. The user should always have an option. I have searched over a span of 2 years for an easy option to disable this or at least a script, with no luck. If however, you read this and find and option that is easy to apply without breaking the system, please share it as it will benefit everyone.

I don't know if that's possible. However, each additional window of an application will add a new tick to the left side of that application's icon in the launcher (up to three ticks I believe). 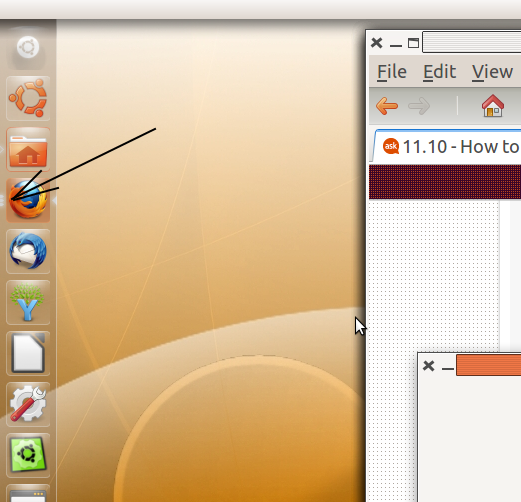 Clicking the icon will bring up a screen of all the open application windows for you to select which one you want. 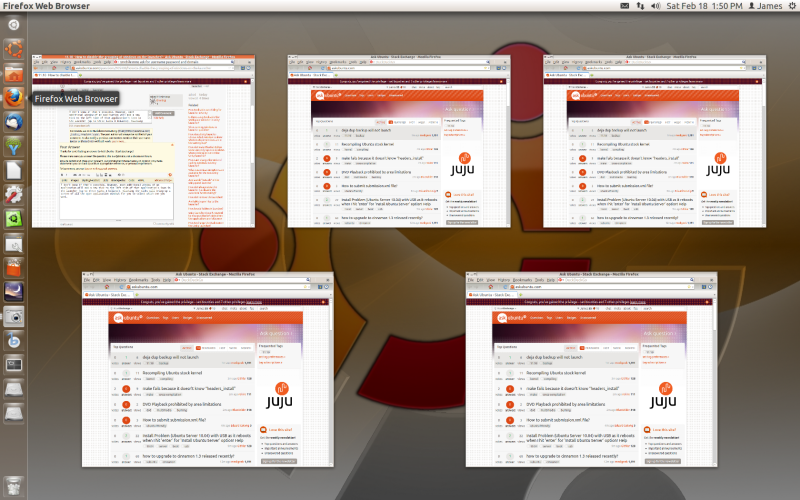 If you need a taskbar icon/item per opened window, then solution could be to use gnome classic or Xubuntu components, not unity. For example Xubuntu (Xfce) works pretty well this way. Solution for you would be to install Xfce and start Xfce session instead of unity session.

On the other hand you will lost a lot of unity functionalities via alt and master keys, lot of keyboard shortcuts, etc.

Additionally, if you follow this question: How can I install XFCE along side unity? , you will find how to install xfce and additionally, there should not be any conflict between unity and xfce, so you can configure a new xfce vertical panel (just tested on Xubuntu) which contain just icons not names of the opened windows ad place it to the right corner for example.

It is not exactly what you need, but I think Ubuntu launcher does not support such functionality - this is a real life.

Turning my comment into an answer:
I think I will settle with avant window navigator (AWN) which has the option to ungroup windows and is very powerful and customizable.

However it is not very stable (some window icons disappear after changing settings or relaunching and some of the launchers icons gets doubled when relaunching). Also it is not matching some windows correctly, such as eclipse and thus leaves a launcher icon at the same time as adding a task icon. Same for shortcuts to Virtual Box VMs.

If anyone knows a better alternative or if someone can tell me if patching unity for this would be a huge work or not, I would be glad to know ;)

31
How to "ungroup" windows from an icon on the launcher?
4
Is it possible to disable launcher grouping in unity?
1
How do I expand the apps on the launcher, like in windows?
137
What Custom Launchers and Unity Quicklists are available?
86
How can I install XFCE along side Unity?
8
Problem binding a shortcut to a function / multimedia key
3
How to disable the grouping of windows on the launcher Lubuntu 20.04
3
How to get Launcher to show All Instances of an Application
0
How to show all windows of one application again when I click its icon in the launcher?
1
Is there a way to separate windows in Launcher?
See more linked questions

3
How can I change the order of cycling windows in Unity launcher?
3
App launch "outside" of the unity-panel launcher
0
Why are there 2 Firefox icons in the launcher, and other issues
5
Can't start an application from the launcher, but can from dash and rightcliking
1
association window <-> .desktop file <-> launcher entry