Why do I get this message on my Lenovo Y720 laptop? I have a thunderbolt 3 port, but for some reason it says this: 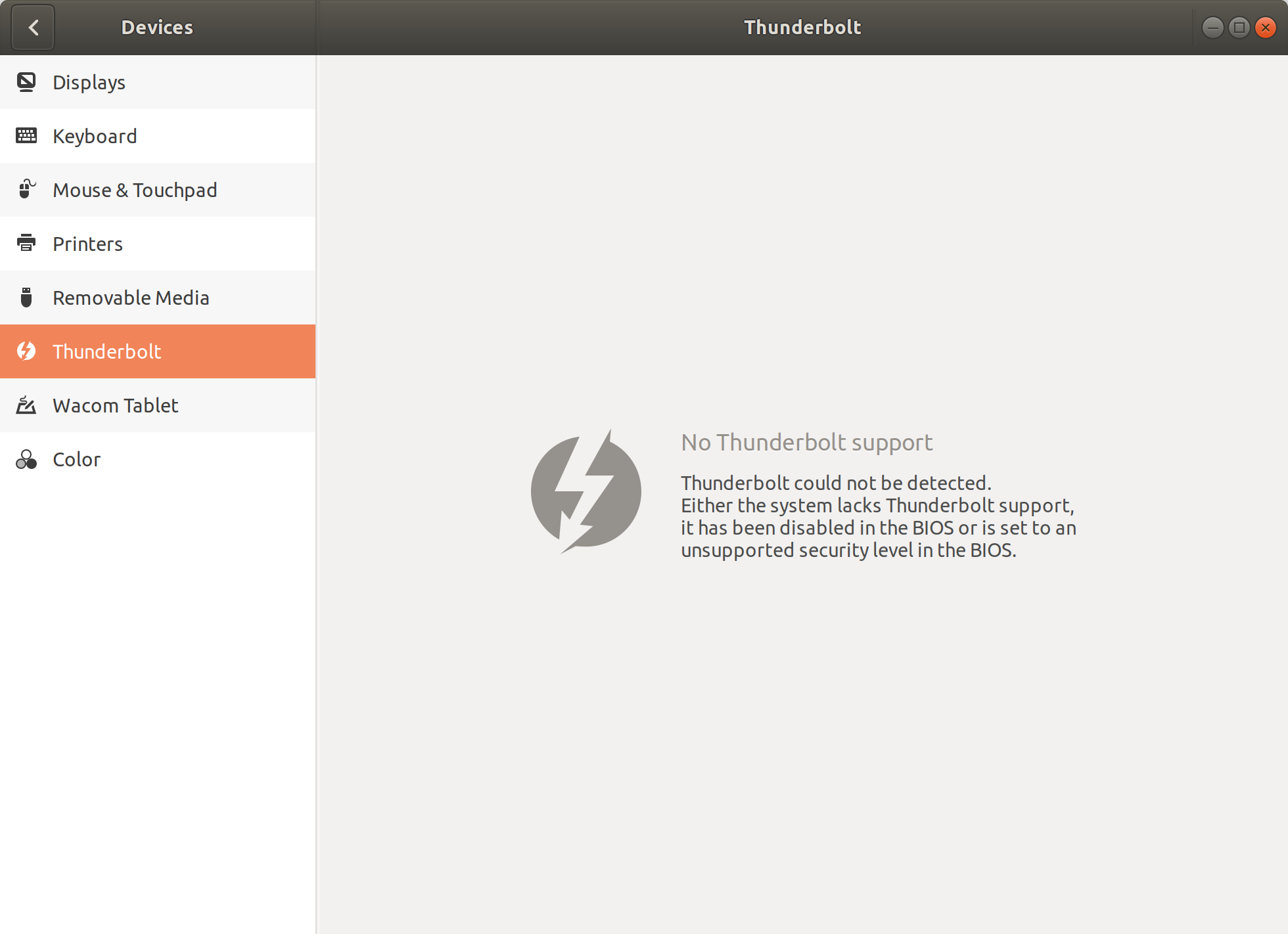 Not sure if you're still looking for an answer, but I ran into this same issue and got it working.

I'm running Ubuntu Budgie 18.04.1 and it seemed to be missing the bolt package.

If you're also missing the package, running the command

and then a restart should give you the ability to access your thunderbolt settings.

And no, even with no devices plugged in, you should still be able to see the controls.

Edit: Another thing you can do is run lspci -tv and look to see if the thunderbolt ports are even recognized by the system.

Thunderbolt controllers in BIOS-assisted enumeration mode go to sleep when not in use. All that is left is a PCI hotplug bridge with no child bridges attached.

The Thunderbolt controllers that break this rule are:

From the above link, we find a command to force the power and wake the controller (usually used for firmware updates without requiring Thunderbolt devices to be attached).

But this only works on recent kernels. I cannot remember which one was the first, but 4.20 most definitely has it (and definitely some earlier ones but for the sake of simplicity, just use that one).

Hopefully this works and allows for your Thunderbolt controller to be acknowledged by Ubuntu. However, since you said you do not have any Thunderbolt devices, I am not sure why you care (although I do not say that discouragingly). But that should be the solution.

Oh, and remember, if you have another Thunderbolt 3 laptop and a USB-C to USB-C cable with USB 3.X speeds, you should be able to connect the two laptops together via their Thunderbolt ports, which will wake the controllers and result in emulated 10GbE networking in between them. If they are both Linux then you will have to "sudo modprobe thunderbolt-net" on one of them.

Finally, I've found some TB docks don't work as reliably as others. I have a Dell TB16 dock that works somewhat sporadically, but my Lenovo Thunderbolt 3 dock seems to do better (I've only had it for a few days, so jury is still out on stability with Ubunut.)

Actually that is probably exactly the problem. Thunderbolt is controlled by the BIOS and depending on BIOS it can be setup and configured in different ways. What you probably want is BIOS Assisted Mode. That completly disconnects the thunderbolt once the cable is unplugged. You won't see it in lspci or any other tool, and that would explain the screenshot you provided.

I can confirm the HP Thuderbolt dock works with Ubuntu 19.4.

Running an Intel (Disco)Nuc so far loving it all 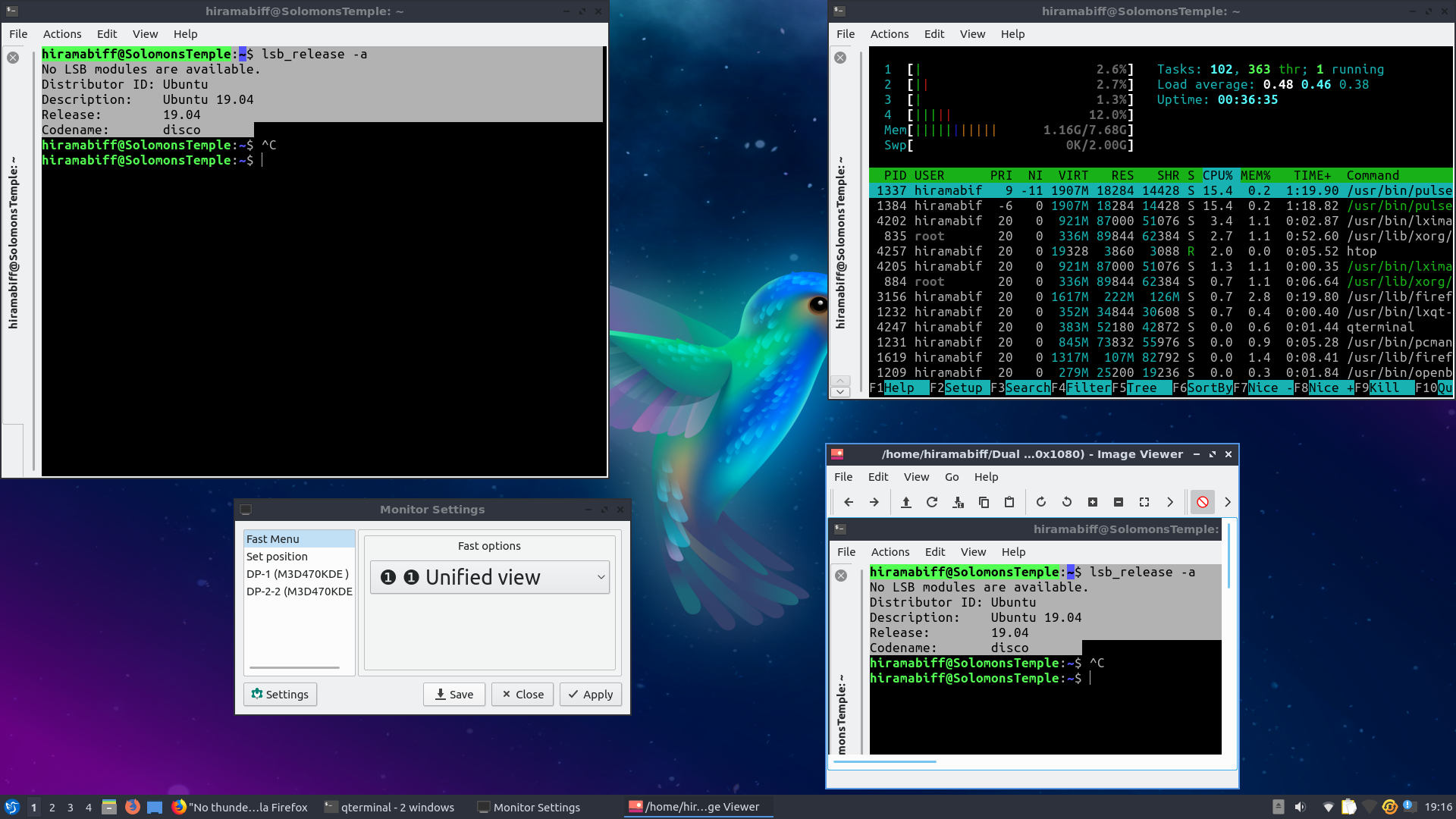 If you tried installing bolt but still couldn't resolve it due to whatever reason. The solution is simply to try upgrading your kernel to newer versions, try different versions to kernels and see which one is supporting the Thunderbolt, this is how I solved it. (I'll suggest you to disable secure boot from BIOS for this).

I had this same issue with my new MSI Prestige A10SC. Luckily I am dual booting Windows and elementary OS 5.1 Hera. The solution was to go onto Windows and make sure I have the Intel thunderbolt software and driver. Using the software you can set CalDigital device to "Always connect". This must be a firmware setting because after doing this, everything worked perfectly on my linux partition.