How to encrypt individual folders?

Let's say that I have a folder, within my Documents folder, that has files I want no one to access without a password.

Is there a way to lock down that folder so that it's password protected / encrypted?

In fact, is it possible to password-protect any individual folder?

WARNING: CryptKeeper has recently been reported that it has a universal password bug that puts your data at potential risk. This issue may not yet be fixed in Ubuntu, use this solution at your own risk.

Cryptkeeper will automatically attach itself to the top panel 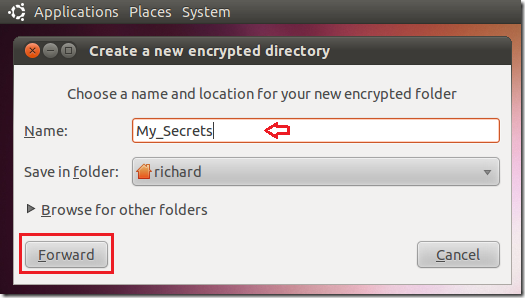 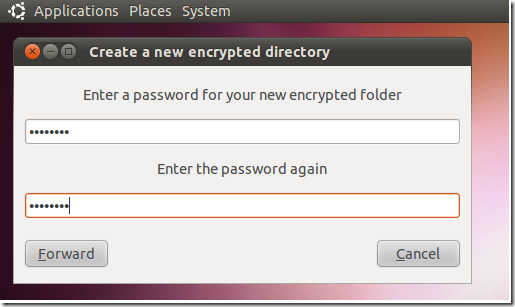 The folder will be created and ready to be used. 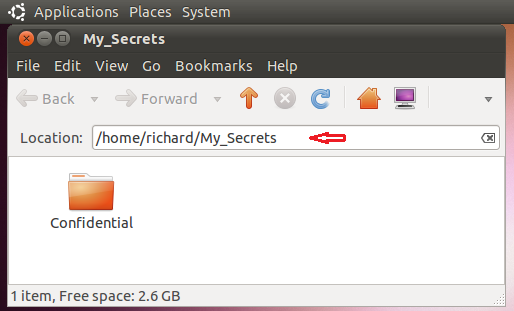 Type the password before it is mounted to be accessed.

To delete a folder or change the password, right-click the folder in the panel-applet.

Search for and install ‘ecryptfs-utils’ in Ubuntu Software Center: 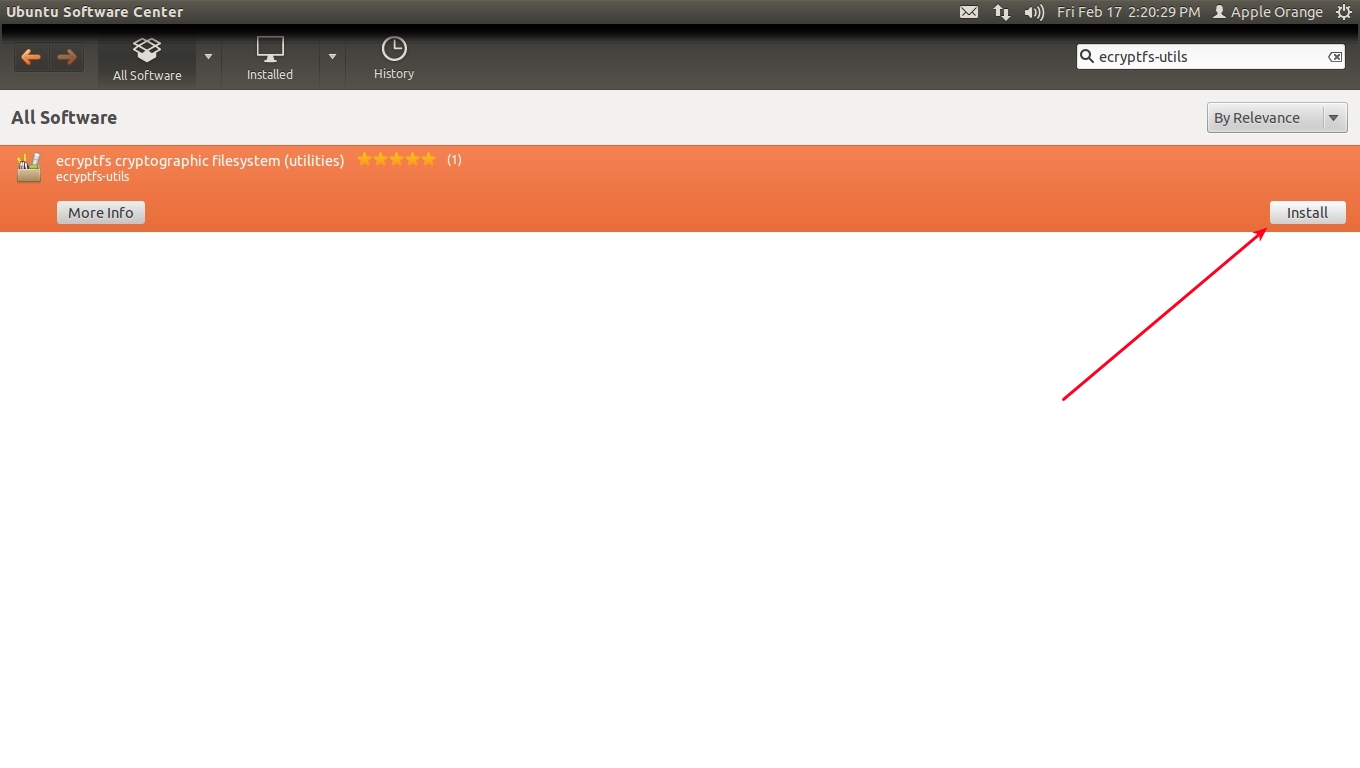 After installing, go to Applications –> Accessories –> Terminal and run the command below:

You’ll be prompted to type your login passphrase (password), and to create one for your private folder:

Next, go to Places –> Home Folder:

And new folder should be created in your home directory called ‘Private’. This folder in encrypted and password-protected. Move all your personal stuff into this folder to secure them: 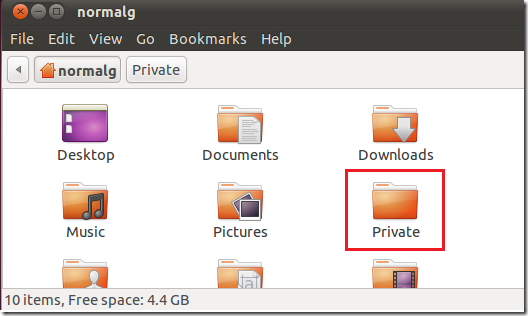 Users without access to the folder will be denied: 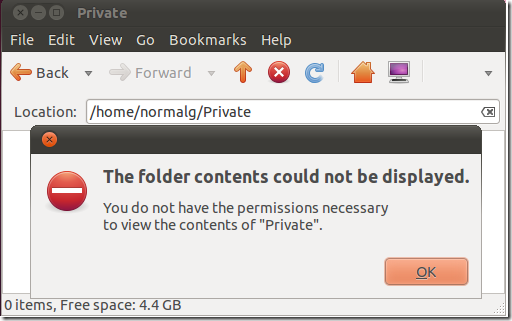 The first involves making sure that the result cannot be opened by any user without knowing the password used.

The second will only change the file / folder privileges so that another user without rights cannot open it. The folder still exists, can be accessed by any user with sudo rights in your system or using a LiveCD and reading the partition. It is also simpler to implement and does not require that you type a password all the time you need to open / mount the encrypted folder / archive.

An easy and fast way to do so is using chmod to change the privileges for a file or folder.

Open a terminal and navigate to the place where your folder is, lets assume that the folder name is foo and that we are currently located where the folder is.

will make foo only available for your eyes, its not encrypted (that is also possible) but only your user (and or a user with sudo privileges) can read or open that file / folder.

You can also do it graphically by right clicking on a file or folder and changing its permissions manually. In the example below you as owner have all privileges and you deny any other group or user from accessing, reading or modifying that file / folder 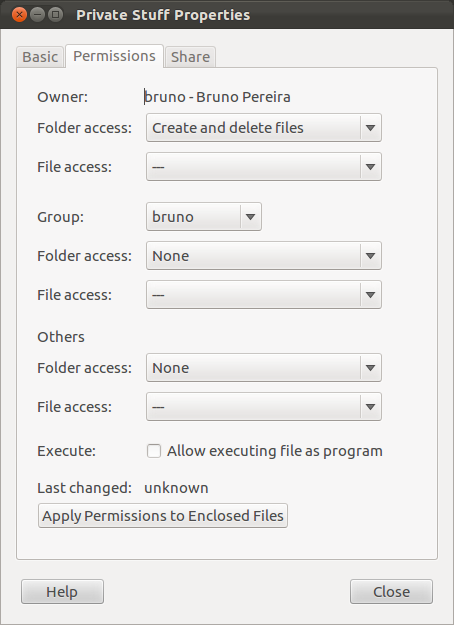 Another way, depending on your needs is to archive the folder as a password protected zip file.

This is similar to another question about password protecting files.

You can use CryFS:

It is used by default in KDE Vaults and is particularly interesting if you synchronize the encrypted content over Dropbox, Freefilesync, rsync or similar software, because it keeps its data in small encrypted blocks and changing a small file results in only a small amount of data to be re-uploaded.

You can try Vault, recent project by an ubuntu-gr member (greek local community).

It's a gui utility for encfs (package in repositories). I quote the package description:

You create a mountpoint/folder which you can then close or delete. If you close it, you need a password to open it. 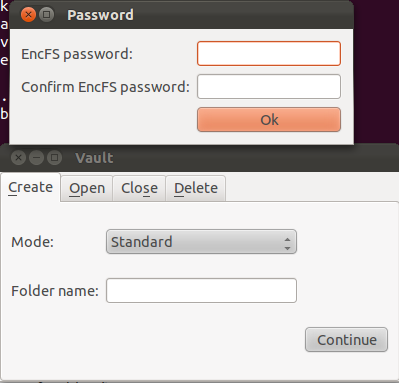 Use encryption at the block device level. Linux provides this with dm-crypt. You can encrypt either the whole disk (except for a small area for the bootloader), or encrypt /home or some other partition. If you don't encrypt the whole disk, keep in mind that confidential information might end up in other places, especially the swap space (if you have any encrypted data anywhere, you should encrypt your swap). Note that if you go for whole-disk encryption, your computer will not be able to boot unattended, you will have to type your passphrase at the keyboard.

Since the whole block device is encrypted, the location of file content and metadata cannot be detected by an attacker who steals the disk. Apart from a header at the beginning of the encrypted area, the content is indistinguishable from random noise. An attacker could derive some information from seeing multiple snapshots of the encrypted data and studying how various sectors evolve over time, but even with this it would be hard to find out anything interesting, and this doesn't apply if you stop modifying the data after the attacker has seen the ciphertext (as in the case of a disk theft).

Also note that if you encrypt something inside your home and not the entire home itself, several common programs can lead to data leaks unless you are hair splittingly careful. E.g.: .bash_history, editor sessions and undo histories, etc.

Some pointers on how to do this:

This answer described the Ubuntu helpers for it (e.g. ecryptfs-setup-private), but you can get more control (e.g. separate different mount directories) and understanding by mounting it yourself.

eCryptfs is already part of the Linux kernel and already enabled by default on Ubuntu via CONFIG_ECRYPT_FS=y, so you can just basically mount it. Being part of the kernel is also generally a positive indicator of quality and stability.

I have the following helpers:

Usage is as follows.

This will now ask you for a passphrase:

so it will now print:

which means that the mount was successful.

If we unmount it:

as expected the directory is empty:

The eCryptfs data itself is contained in the ~/.ecryptfs-dat directory we passed to the mount command.

No matter where we mount to, as long as we use that directory as the data directory, the contents of the unencrypted mount point will be the same.

So we observe that:

We can now check if those files are actually encrypted:

which gives no matches, so they likely are encrypted.

The cool thing about how those encrypted files are stored, is that you can then easily backup the encrypted files anywhere by just copying them over to an unencrypted medium with rsync, and only out-of-date files will be copied. There is no need to even first enter your password in that case!

The non-cool thing about it, is that an attacker who is trying to prove that you had a known piece of information might be able to prove that by comparing the file sizes and directory structure layout as mentioned by Giles.

it will now print:

So we observe that the FNEK for asdfqwer is different than that of the correct asdf password: c55c6f13e73332d3.

If we decide to mount anyways with yes, it then asks:

and if we enter yes, it would, as promised add the FNEK to the /root/.ecryptfs/sig-cache.txt. Let's say no for now. We can check what that file contains:

it currently only contains the asdf FNEK:

so we understand that it is just a whitelist of known good passwords.

Now let's see what we get with the wrong password:

and we see that the directory is empty as you might expect. It seems that each file in the data directory must contain some kind of password check data, and just doesn't get mounted.

If we umount and move back to the correct password asdf, it wil once again ask for FNEK confirmation which is a bit annoying.

We can prevent that from happening every time as mentioned at How to automatically specify the Filename Encryption Key with ecryptfs? by adding:

to the mount command. TODO would knowing the FNEK help attackers crack the password?

Finally, when the ecryptfs directory mounted, we can see it under:

which contains a line of type:

ecryptfs vs CryFS vs EncFS

These are all directory-level methods so it would be good to understand their tradeoffs, Some comparisons:

I can't find "the question" for this, so here goes a QEMU experiment based here with Ubuntu 20.04.1. 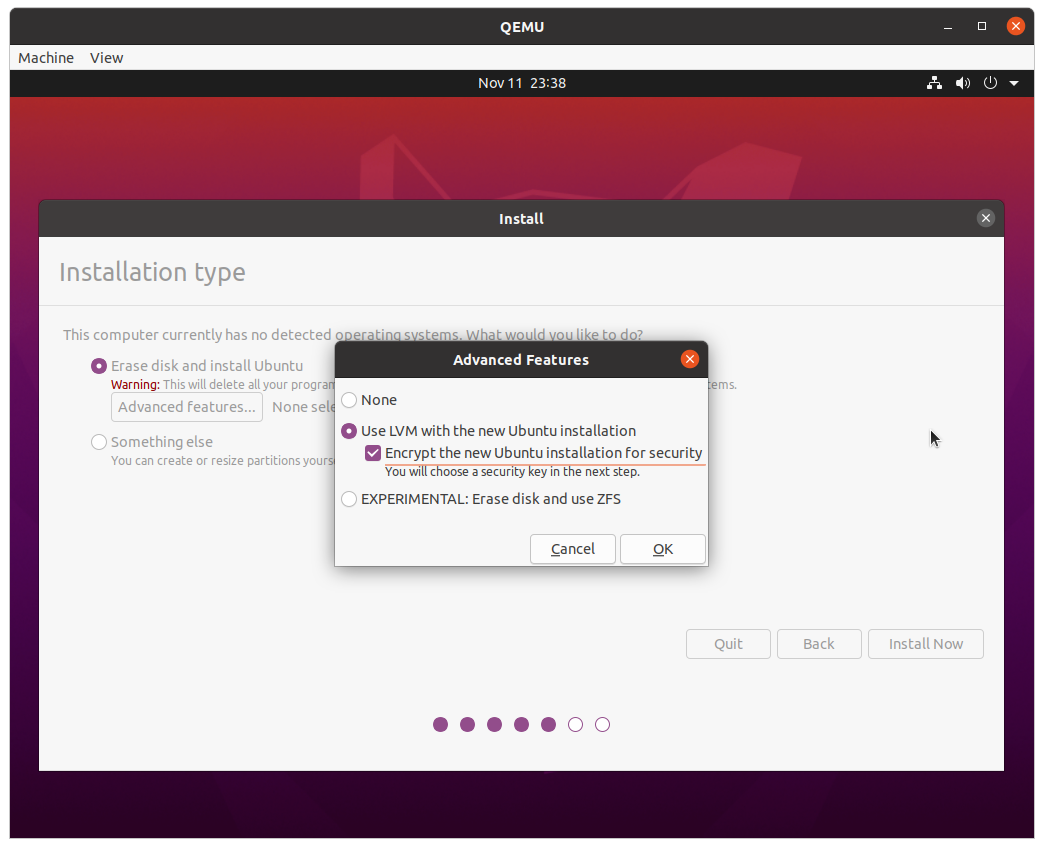 Then it asks you for a password on the next step: 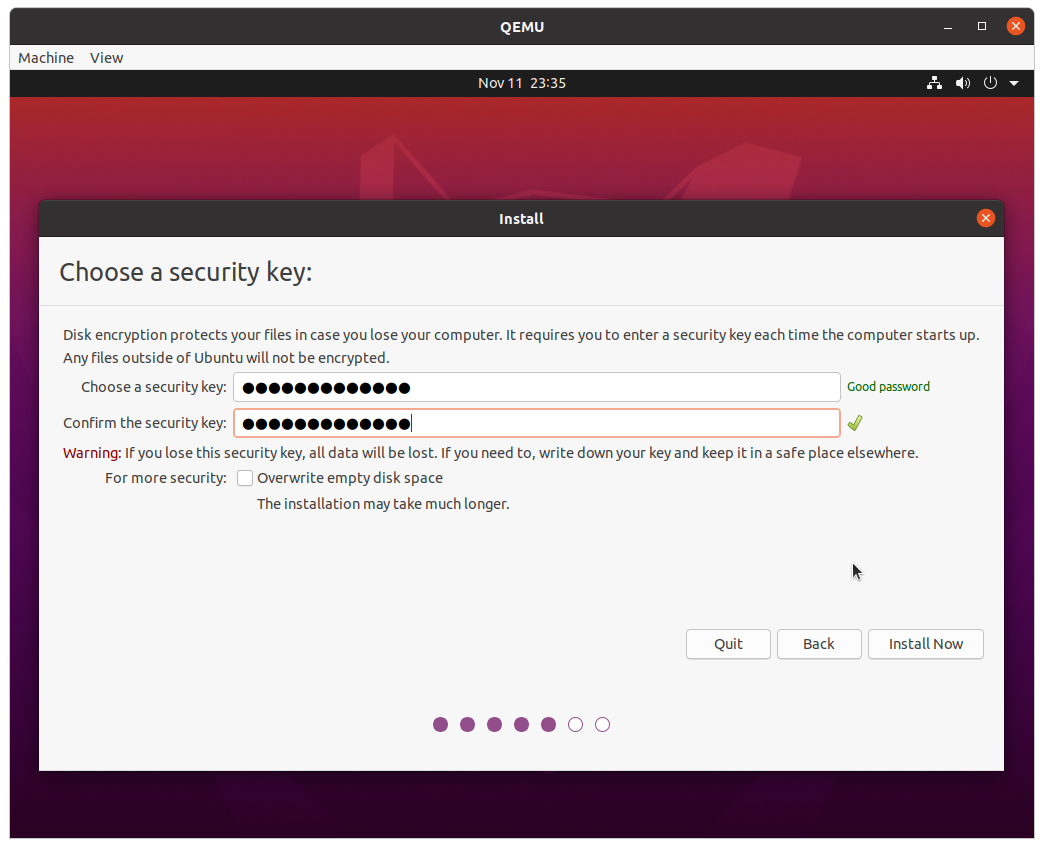 Now, every time you boot, the very first thing you see, (TODO before or after the bootloader?), is a password prompt: 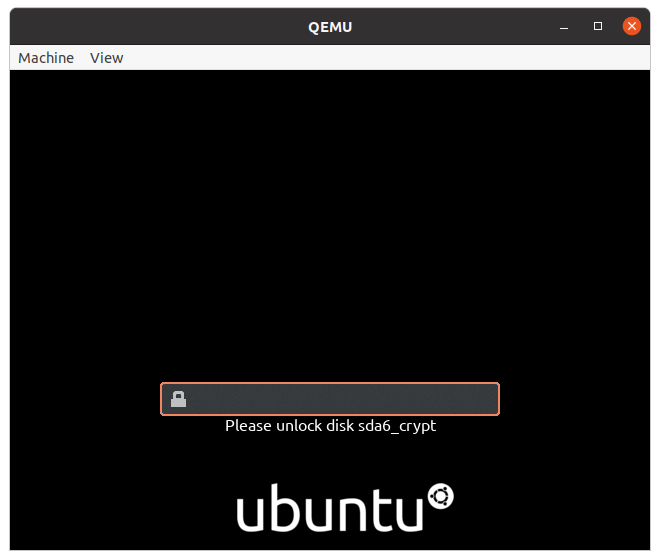 And after this, if you enter the correct password, it goes into a normal boot.

After logging in, from inside a shell we do:

so it appears that the second stage bootloader under /boot itself is not encrypted, but the root directory and swap are.

As mentioned at: https://help.ubuntu.com/community/Full_Disk_Encryption_Howto_2019 this opens you to the risk that an attacker would be able to compromise your machine by tampering with the boot folder, without your knowledge, and use that to later extract your decryption keys if you continue to use the machine.

There doesn't seem to be an automated way of doing it as of 20.04, but hopefully it will get implemented sooner or later, some manual guides:

OK, we are now reaching a CIA/Silk Road level of opsec paranoia topic: how to quickly ensure that your data can't be decrypted if you are caught with the computer turned on and have a second to act.

First, suspend to RAM does not seem to be good enough, hibernation will be a wiser move:

Hibernation seems to save data in the swap partition, so as long as your swap is encrypted (Which it obviously should be in an encryption setting, otherwise your RAM will leak there), it should be safe.

Now, on a laptop, the best method is likely a lid closing action, e.g. this post mentions that:

Alternatively should setup a keyboard shortcut or a power button action. How to hibernate from CLI: How can I hibernate on Ubuntu 16.04? mentions:

You could also use gocryptfs. In my experience it is significantly faster than cryfs with big encrypted shares, but does not hide the structure (file sizes and number of files). depending on your threat model this may or may not be a problem.

To initialize the basedir (once)

To mount basedir (the encrypred version) on mountdir (the unencrypted version)

Not the answer you're looking for? Browse other questions tagged password security encryption directory or ask your own question.