How do I install the latest Nvidia drivers via the Additional Drivers tool?

Well obviously I can do it manually, I was just wondering why aren't these drivers available through "Additional Drivers", and why are the versions available there outdated.

Drivers in the Additional Tool will never be updated to higher versions unless there is a very big issue with them. You need to either add the PPA or update manually.

Upon a Ubuntu release packages are frozen in time only to be updated in case of major problems and bugs. Adding this PPA will update your drivers to the latest versions using packages packed by the Ubuntu team.

The System 76 folks maintain a PPA with just the nvidia drivers in them, so you can use this for just about any machine with an nvidia driver. The nice thing is they keep this PPA up to date with the latest upstream nvidia driver, making this PPA ideal for gamers.

Then either restart the X server or reboot.

How to remove/uninstall these drivers

Since it's an old (2015) question the previous answers are a bit outdated. The system76-dev/stable ppa does not seem up to date. Proprietary NVIDIA drivers are removed from bleeding edge xorg-edgers PPA but can be found now in the graphics-drivers PPA.

The xorg-edgers PPA also works well. From what I understand, this is a PPA that posts the latest proprietary Nvidia drivers. To install, open a terminal and type:

Now you should have drivers listed in the Additional Drivers tool.

The only thing I don't get is, when you go to Additional Drivers, why are the proprietary drivers listed as open source? 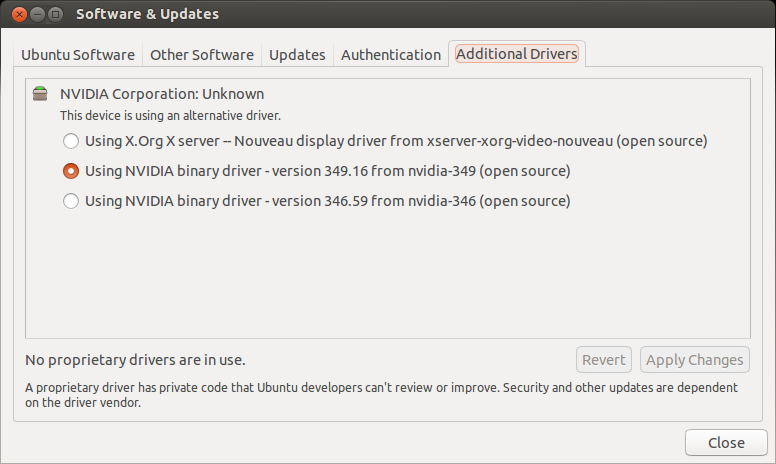 Try looking for a PPA. Basically anything in the repos is tested and generally all works the latest versions take time to come through. Some NVIDIA drivers are also classed as experimental so wouldn't be suitable for a novice end user who might stumble across them in additional drivers to install. So a good way of getting the latest and greatest is by seeing if someone has made a PPA by googling. If not you're back to manual sorry!

0
Installing Nvidia drivers on ThinkPad w530
2
How do i install Nvidia Drivers in 12.10 (new to ubuntu)
1
How do I copy program files from Windows partition to my Ubuntu partition
0
Every time I get an update that says "Ubuntu Base" I lose graphics, and have to reinstall the driver. Is there a fix?
0
ubuntu switched back to ubuntu-2d in 12.04
0
can't install latest nvidia drivers