Message in the terminal

Well, i recently uninstall Oracle SQL developer... since that, when I open a terminal it shows me this:

And I don't know how to remove it. Any suggestions? 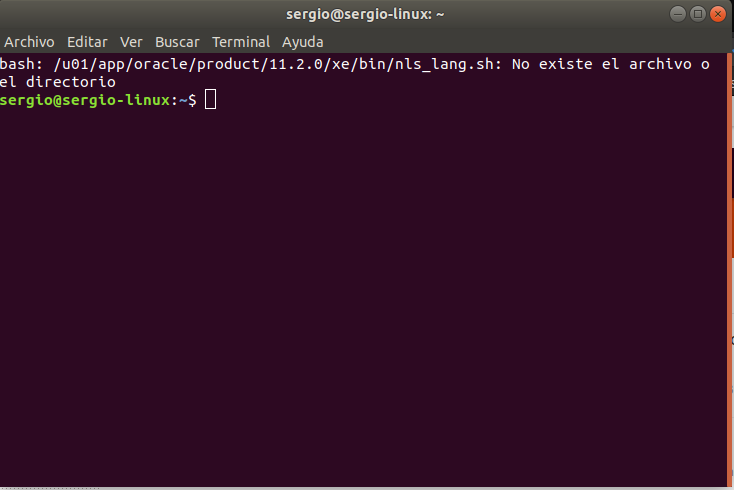 As solved in the comments via checking your ~/.bashrc file via grep -n 'nls_lang' ~/.bashrc, there's

segment on the line 120. Simply remove that line or comment out, and the error won't appear again.

The backticks are a form of command-substitution, so this expands $ORACLE_HOME to specific directory, concatenates it with /bin/nls_lang.sh. and executes that script. The output of that script should have been saved to NLS_LANG variable, and exported for use when that software is called from command line. In general, export makes variables available to whatever process shell starts.

As you have uninstalled the software, so the nls_lang.sh is also gone, but your ~/.bashrc file has remained unchanged. Since bash reads ~/.bashrc whenever you open interactive session in terminal, it still tries to execute that non-existing script, and that's why you see the error. What you should do, is go through ~/.bashrc and probably remove the related variables such as $ORACLE_HOME and others.

1
How to remove error message when installing new softwares
1
How can you create a command with a Bash file
2
open bash terminal in a specific directory
3
Nautilus-Open-Terminal tries to open ZSH instead of bash
1
Trying to Install Java 6
0
Problem in renaming the partition and opening a file through terminal
4
Set environment variable UBUNTU 18.04 (bionic) - Crontab
0
bash: :/root/dotnet: No such file or directory