How do I tell GRUB2 to set its resolution (and also the one passed to the kernel) to the maximum one it can detect at time of boot?

I presume the reason you are asking about this is that you use different monitors on the same Ubuntu machine and you want GRUB2 to look good on all of them. However, if you are concerned about the resolution used once Ubuntu boots, this does not address that. GRUB2 does not "pass on to the kernel" the resolution it selects for the boot menu.

Edit /etc/default/grub as root. You may want to back it up first:

(You would run that in the Terminal, which you can open by pressing Ctrl+Alt+T.)

To edit it with Gedit as root run:

(Or if you're using Kubuntu, run kdesudo kate /etc/default/grub instead.)

You'll get a lot of messages in the Terminal, if you run that command in the Terminal rather than with Alt+F2. You'll notice they don't say they pertain to the file you're editing, so that's fine.

You'll find that part of the file says something like this:

Uncomment (i.e., remove the leading # from) the line that says GRUB_GFXMODE, and change the resolution from 640x480 to auto. The line should now read:

Save the file and quit the editor. In the Terminal, run:

(This must be run after every modification to /etc/default/grub, to apply the changes.)

Now reboot, and see if that does what you want.

It might not (as it uses the "platform default" which might not be the highest possible). If that is the case, edit /etc/default/grub again, and this time change the line so it says something like:

You will not necessarily want to use exactly that line. You should list all the resolutions you want to be tried, in the order you want them to be tried. The resolutions I have listed are the most standard resolutions for monitors with a 4:3 aspect ratio, but widescreen monitors (including most laptop screens these days) have different form factors and use different resolutions. Wikipedia has a list of common resolutions which may help you. If you know the specific resolutions you want for each device, you can just list them (highest first). You should probably include 640x480 or auto at the end . I recommend this because I don't know if GRUB2 will always try a safe low resolution, if you don't include that.

Then save the file again, run sudo update-grub again, reboot again, and see if that does what you need.

If it doesn't, you may be out of luck. GRUB2 doesn't display video the same way as Ubuntu does once it's booted. GRUB2 uses VESA BIOS Extensions to display the boot menu with enhanced resolution (and color depth), and a machine's maximum resolution through VBE is not always as high as the maximum resolution supported by the video card and monitor.

Source: The official GRUB2 documentation. (You'll notice the version number is 1.99. It's still GRUB2. A bit confusing, but true.)

[Finally, thanks to TechZilla for pointing out a serious error in the original version of this answer.]

Grub Customizer allows to edit, rename, re-order or freeze Grub entries. It also allows to change the background colors of Grub menu or add a custom picture and supports BURG customization also. You can also use Grub Customizer from a Live CD/USB environment to fix your boot issues.

Under Appearance tab enable custom resolution, and type auto in the text box.

Alternatively under Advanced tab enable GRUB_GFXMODE and type auto in the text field in front of it. You can also specify resolution as a sequence of one or more modes, separated by commas (‘,’) or semicolons (‘;’); each will be tried in turn until one is found. For example: 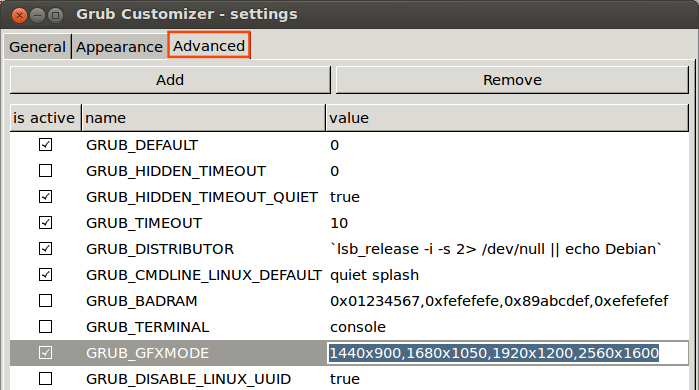 Close the Preferences dialog box and click save on the toolbar of main window. That's it!

3
Change GRUB text size based on resolution
79
How to safely change grub2 screen resolution?
2
How to change TTY resolution after boot?
0
Still getting input out of range error in grub