18.04 Screen remains blank after wake up from suspend

So, when I suspend my laptop, then wake it up later, my laptop does turn on, I'm able to, for example, turn up and down the volume with audio confirmation using the kepboard, but my screen remains black and doesn't show anything until after I restart my laptop.

suspend screen
Share
Improve this question
asked May 6 '18 at 6:27

It is the buggy nouveau driver again. That's what solved the issue for me. Edit the file /etc/default/grub (using Vi editor -- some users have not been able to save after editing in Vi and have had to use the alternate "Ex" editing mode, which substitutes sudo edit below, then Alt+:w and :x for the save and exit commands).

Add nouveau.modeset=0 to the line that says GRUB_CMDLINE_LINUX then press CtrlO to save the file and CtrlX to leave Editor.

That seems graphics card driver problem.
Try Ctrl + Alt + F3 then Ctrl + Alt + F2 (might be F7) this might turn on display.
But it's temporary solution.

You may want to persistent solution then you can try to upgrade or change your graphics driver or try @cascagrossa's grub settings solution.

i fixed it by changing Graphics BIOS configuration: Advanced -> Built-In Device Options -> Graphics, then switched from Hybrid Graphics to UMA Graphics. (on an HP laptop)

Sorry if what I'm saying is weird (I'm using the google translator). In my case, I am using an Asus Vivobook S15. After desperately searching, I accidentally gave the solution (in my case) and I wanted to share it. What I did was install the Unity Desktop:

And although it seems absurd, it began to work, almost magically. I hope this information is useful for someone. A greeting!

Here is what fixed this issue for me on Kubuntu 20.04 Intel NUC PC (NUC8i7HVK), which has Intel HD graphics + embedded Radeon RX Vega M GH:

I went into UEFI BIOS settings and enabled PCIe ASPM (Active State Power Management). I left some other settings such as "Native ACPI OS PCIe" disabled 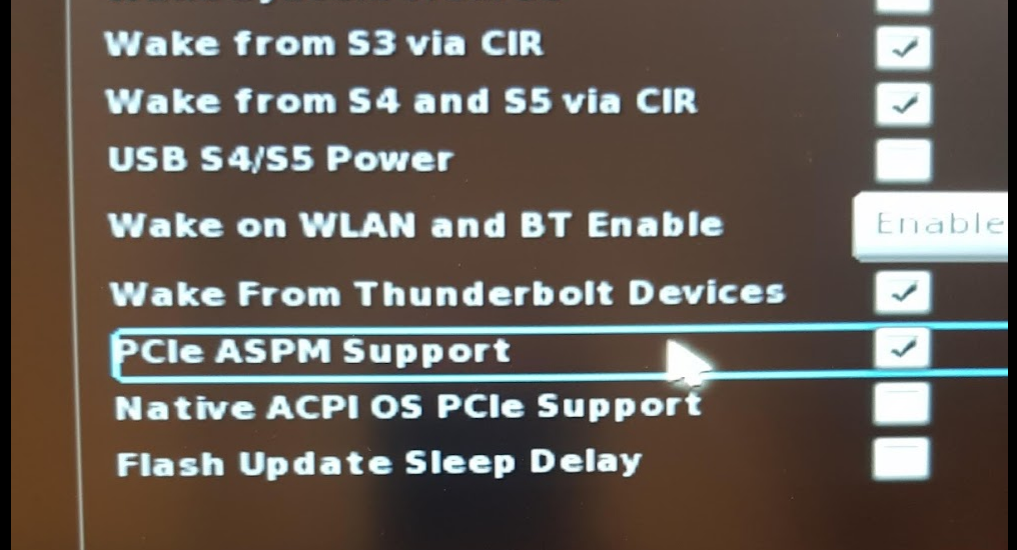 This is very easy to test so give it a shot and see if it helps.

I've found that simply pressing the function ("Fn") key wakes the screen up when all else fails. All else being other random key-resses.

I don't know how to really solve the problem, but remember: before you hold down the power button to hard reboot, you can always soft reboot with this funky sequence:

Hold down Ctrl + Alt + PrScr, then press the following keys one-at-a-time while holding those first 3 keys down the whole time: R, E, I, S, U, B.

Note that on some (many?) laptops/keyboards,the PrScr button may require your Function key, Fn, to activate it, so you may have to hold down Ctrl + Alt + PrScr + Fn instead, while typing the REISUB reboot key sequence.

I don't remember where I learned this, but I read it from someone else years ago on Ask Ubuntu or SuperUser somewhere. The last key, "B", stands for 'B'oot. So, when you press that key your computer will restart.

Keep this in mind for any Linux problem. Only do a hard reboot if this soft reboot sequence first fails.

I tried all the answers given in this post, none of them helped me(changed drivers, updated drivers, edited /etc/default/grub, changed display manager, made more swap, spent some hours, prayed to laptop).

I then finally gave up & thought to enable hibernate mode, while enabling that I ran

Then I felt it is due to UEFI boot mode in BIOS. Made that option to legacy support which enabled another option Boot priority, let this be default as UEFI First.

After this I am able to resume the system after suspend.

P.S. Windows never had any problem resuming from sleep.

This seems to work for me (as a temporary solution).

When your screen is blank, this sequence of actions seems to do the trick:

Not the answer you're looking for? Browse other questions tagged suspend screen or ask your own question.