I had huge issues with this (ufw was blocking stuff on br0 even though I set up a rule to allow in on enevrything), so I set ufw to by default allow everything and then started adding exceptions for the interface I want blocked, like so:

I have a few of these for every port I don't want accessed from outside. But this solution makes me uneasy: basically I'm leaving everything open, just not listening on it. Sooner or later I'm going to forget to protect something.

So I went the other way around and wanted to create a set of rules which would allow certain ports but deny everything else, like so:

The last command was intentionally leaving port 22 open so I could test effectiveness of the rules without risking losing my ssh connection to the server.

However, adding the deny rule immediately blocked the entire server. Everything, not just 30:65535. nmap thought it was down. Just by some huge luck, my existing ssh session remained active so I could delete the rule.

Now, I know I'm not some ufw guru or something, but this really came as (another) shock to me: it seems I have no idea about how it works.

Can anyone enlighten me on the deny rule? How I need to set it up?

Final edit: It turned out that uninstalling & reinstalling ufw fixed the issues. It seems I messed up some setting at some point which caused all the unexplained behaviour.

You should reset ufw to defaults and start over:

Then just add some rules to allow incoming connections for the applications you want to use:

Now you can enable ufw

Now ufw is running and configured to deny all incoming connections except connections to the ports needed for ssh and http. Outgoing connections are always allowed and this is normally desired.

You don't need to add a deny-rule for incoming connections like in your configuration:

This rule is unnecessary, incoming connections are denied by default.

for example would deny all outgoing connections on port 6773, any application that would need to use this port wouldn't be able to work properly anymore.

The rules in the section above need to be adapted to match your external interface (the rules in your question look like that).

Another important thing is the rules order. When a package arrives at the interface, ufw will check the rules,one by one. Whenever a rule matches the rule will be applied and the package denied, rejected or allowed. The rest of the rules which have not been checked at this moment are not used then. In your case I don't see much relevance of the rule order,but we always have to remind that rule order may matter.

If you don't intimately know how TCP/IP works, but still want to protect your computer, start by using gufw and then you have a GUI front-end to ufw:

then go to the dash if using Unity and type gufw or go to System Administration Firewall configuration and the following UI will show up: 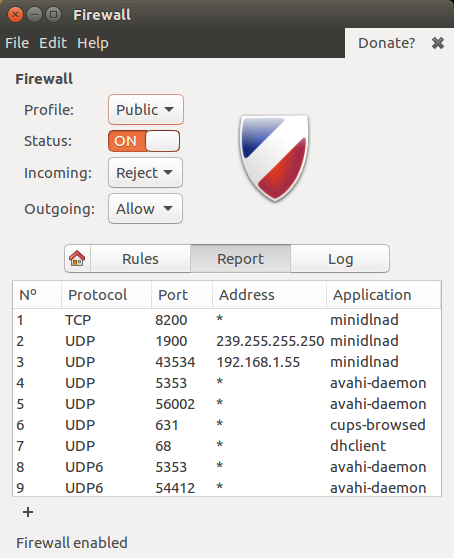 When starting, take it easy and only use the Home and the Public profiles only and use the Office when you want to do something in-between those 2.

In the Home profile, leave everything open (=disabled) as you should be behind a NAT firewall (your router is a NAT firewall) already so at home there is no need to protect anything.

In the Public profile, enable the firewall by clicking on the Status slider and start by using the report rules only for the first few days: 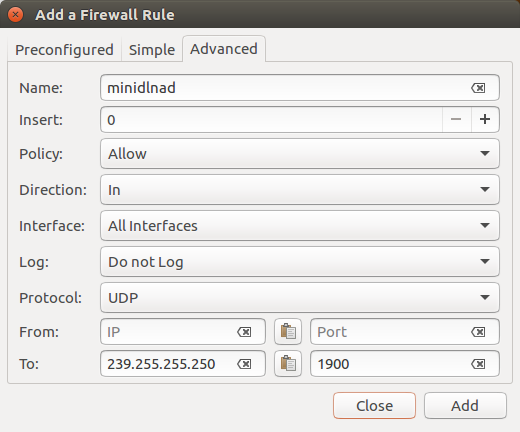 and then go to a terminal and look what kind of rules gufw created for you in ufw:

And then it'll become obvious that you don't need to add additional rules to block incoming connections when in a public place: just allow the applications you need to be enabled.

The more you use gufw and the more you look at the ufw firewall rules it generates, you'll see that after a while you'll just be using ufw and forget all about gufw for advanced settings.

Not the answer you're looking for? Browse other questions tagged ufw or ask your own question.