This option seems to have gone away after upgrading from Ubuntu 16.04. I tried installing nautilus-open-terminal but it is unable to locate the package for 18.04. Also trying to install nautilus-actions gives: 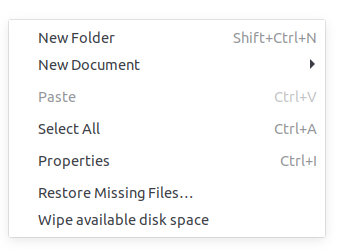 How to fix this?

Does the package nautilus-extension-gnome-terminal provide what you want?

Method of determining the new package (in case it's of interest)

I'm still on Xenial, which made some things easier, some harder.

First, try to determine what specific file (i.e. script, linked library or the like) is responsible for the feature on Xenial. The name of the file is likely to contain terminal so search for that:

and within less search for nautilus, as a first guess (if I were more confident I'd have just used grep).

Check what package provides it:

It seems that it's provided by the package gnome-terminal itself (which matches what I remember — I didn't have to install any special packages).

The online list of files provided by the gnome-terminal package corroborates this:

Unfortunately, /usr/lib/nautilus/extensions-3.0/libterminal-nautilus.so is no longer provided by gnome-terminal in bionic:

If I had access to a machine running bionic (or could be bothered fiddling with the options for apt-file to use an alternative sources.list, I'd have used:

to find the package providing the file.

As it is, I just used the online interface at packages.ubuntu.com.

To check, nautilus-extension-gnome-terminal does provide the needed file on bionic.

Hope this help you

For anyone using 19.04, didn't find this mentioned anywhere else.

I initially had to use a Nautilus script to solve this problem, especially when the folder is full of files and there's nowhere to click. But I recently found I can just click on the name of the current folder in the 'address bar', and get the Open in Terminal option, which is good enough for me. 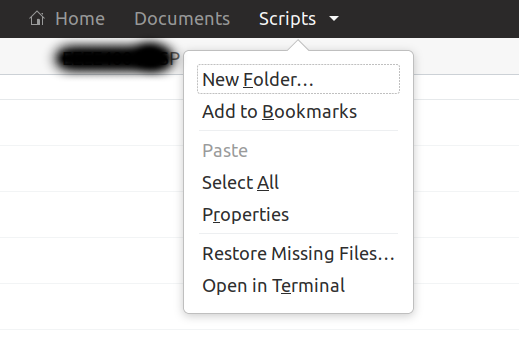 then to open window

For recent versions of Ubuntu (eg. 18)... create/save this script in:

Note: you need to also chg the permission of this new file to allow execution

It will add a Scripts right click context menu item (with the name given e.g. 'open-in-terminal.sh') for any file or directory you click in nautilus.

Based on this source: https://help.ubuntu.com/community/NautilusScriptsHowto/SampleScripts#Open_terminal_here

Not the answer you're looking for? Browse other questions tagged nautilus 18.04 or ask your own question.

2
open terminal option is not showing in all folders in Ubuntu 18.04.1 LTS