Now that Unity is gone, the usual way of setting a Compose Key (via Keyboard Preferences > Layout) no longer works (because in Ubuntu 18.04, Devices > Keyboard has no Layout tab).

How do we set a Compose Key in Ubuntu 18.04 Bionic Beaver?

You may use (GNOME) Tweaks to set the option.

Alternatively, for those who prefer the GUI:

Then launch Tweaks and go to "Keyboard & Mouse" section. The "Compose Key" options is disabled by default. Click on the "Disabled" button. 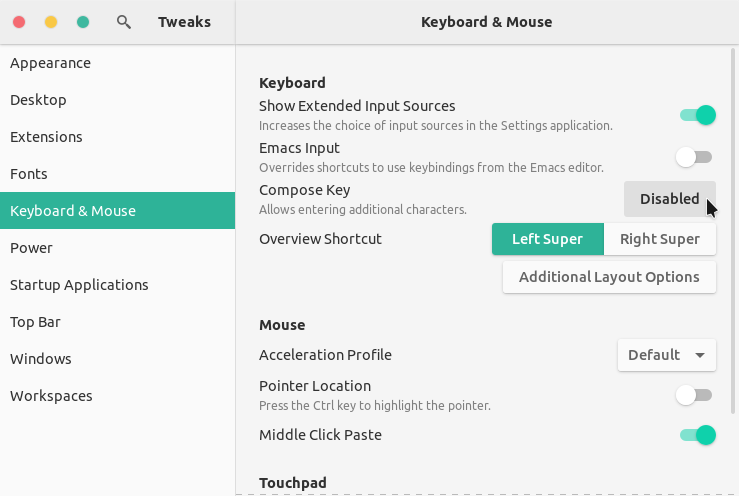 Then a window will pop up. Toggle the switch at the top on and then you'll be select the compose key 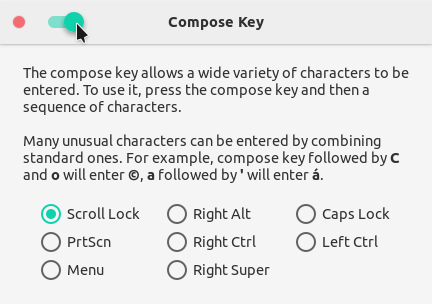 To expand upon what @pomsky detailed in their answer, the official documentation covers the two solutions available.

One is through installing Gnome Tweak Tool via the terminal like so: sudo apt install gnome-tweak-tool

And the other is typing the Unicode character's code point. To do this, press Ctrl+Shift+U, release all keys (you'll see an underlined u), type the code point desired, and then press Space or Enter to complete.

For example, a common one I use is referred to as “Smart Quotes” which are U+201C & U+201D respectively. So you would type 201C or 201D after releasing the initial keys, and complete the process with Space or Enter.

The dconf setting that worked for my GNOME 3.28.2 is

To set the Scroll Lock as the compose key, the value should be

See the gnome-tweaks source code for other potential values.

That means you can run a command like this:

Not the answer you're looking for? Browse other questions tagged keyboard 18.04 compose-key or ask your own question.

4
Setting compose key in ubuntu 17.10
0
Ubuntu 19.04 Disco Dingo umlauts and accents. I have searched, yet not found. Anywhere
28
How do I insert an umlaut on the u in ubuntu?
38
How can I enable Compose key?
48
How can I type ASCII characters like Alt + numpad in Windows?
7
How to set compose key to pause in 13.10?
5
Shorcut to insert bullet point • into text in Linux (Ubuntu 18.04LTS)
4
Remap LWIN + ; to ä
2
Enabling Compose key with Tweaks doesn't work on Ubuntu 18.04
0
Getting the capslock to input foreign caracters and currency
See more linked questions