"The 'grub-efi-amd64-signed' package failed to install into /target/" during installation of Ubuntu 18.04 [duplicate]

When I'm trying to install Ubuntu 18.04 on my desktop, it shows the following error: 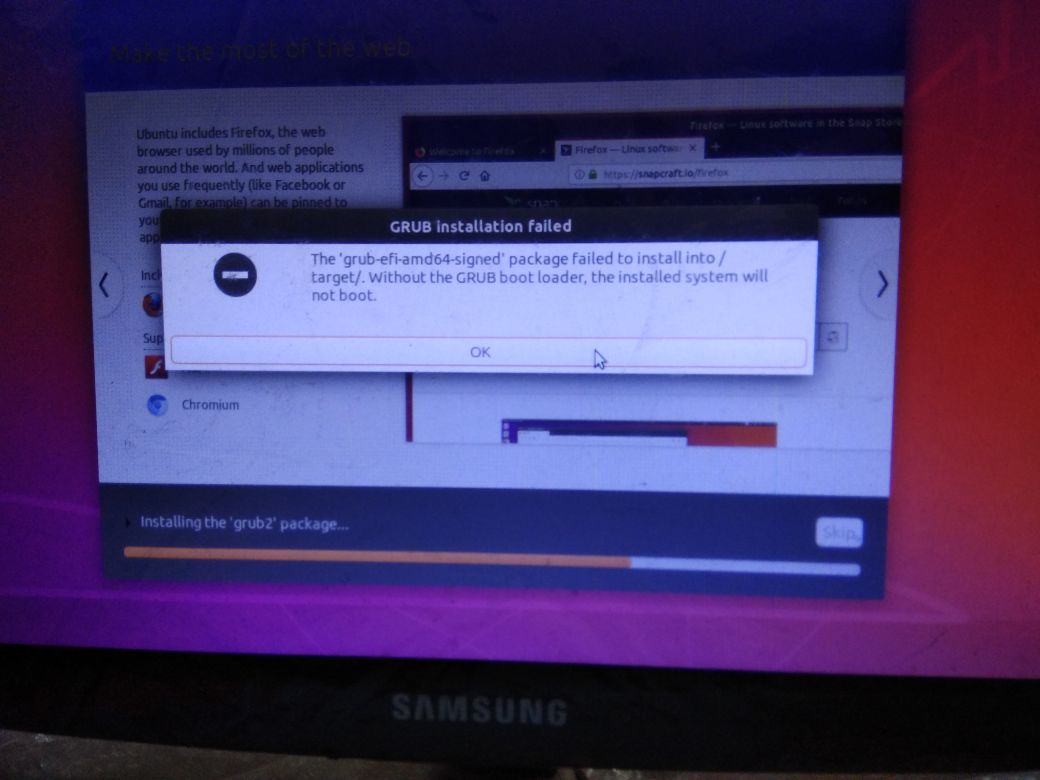 The 'grub-efi-amd64-signed' package failed to install into /target/. Without the GRUB bootloader, the installed system will not boot.

How to fix this error?

If after getting this error message, you rebooted your PC and can't boot Ubuntu because of GRUB booting error, you need to reinstall GRUB manually into the EFI system partition (ESP) through chroot. Here's how I did to fix the problem in my case.

Boot into your LiveUSB (or LiveCD) and select 'Try Ubuntu without installing'. Later, you may need to ensure you can connect to the Internet on your live session.

Let's suppose you installed Ubuntu in /dev/sdXY partition, and an already existed ESP is in /dev/sdXZ partition, on the hard drive /dev/sdX. Open a terminal and execute these commands :

Once you chroot successfully into your installed Ubuntu system, make sure to (re)install the right grub-efi-* package for your PC architecture :

# apt-get install --reinstall grub-efi-ia32, etc... You can get the list of available packages with # apt-cache search ^grub-efi

Finally, to install grub2 into your drive:

Edited and modified original answer, AFTER further 20+ experiments on both of my machines. To make it short answer, I will remove all incorrect assumptions and conclusions in the old answer.

----------------My computers ARE 1. Fujitsu LIFEBOOK-LH532, which UEFI BIOS in the mainboard was destroy by ubuntu EFI ubiquity version 12.04, in 2012 https://bugs.launchpad.net/ubuntu/+source/efibootmgr/+bug/1082418 Obviously I choose manual BIOS installation on my NoteBook UEFI LH532. SINCE I DON'T WANT TO open MY NOTEBOOK TO SHORT CIRCUIT JUMPER cl1&cl2 ON THE MAINBOARD again SINCE I "THE BUG" IS STILL THERE. ***I forced manual BIOS mode by not provide EFI partion on any hard disk. BUT ALL INSTALLATIONS WILL DETECT UEFI MAINBOARD AND WILL TRY TO INSTALL EFI UBUNTU "FIRST".

The errors exactly as the topic is, resulted in problems with "UEFI"NOTEBOOK ONLY.

I FIXED THE BOOTING BY

Reasons for the error of this topic is you don't provide EFI partitions for the manual "something else" installation mode.

So if you purposely, like me, not to have EFI partition. you will have this error.

But 16.04 versions, have a smarter UBIQUITY or ? whatever? than 18.04. It will found that you install with BIOS installation (no efi partition in the hard disk) and let you chose to "GO BACK" to install ubuntu with BIOS mode. But the 18.04 will do installation with out any choice in my case and possible yours.

I will call those poorer quality in these circumstances of 18.04 as "BUG". But it could be the programmers intention to force us to use only proper clean automation only???, which they should have remove "something else" option.

Then install UBUNTU 18.04 with no errors, though it jealously prohibit me to boot into MANJARO LINUX which I installed after Windows 10 with no issues too.

And of course, UBUNTU 18.04 destroy my BIOS F12. JEALOUSELY PROHIBIT me to install any other OS, and I have to open the notebook case to short circuit jumper CL1 and CL2 to get F12 to choose boot media back.

I did report this to lunchpad as the link I provide above.

Sorry off the topic a bit but let you all knows there are more bugs in ubiquity or installation process more than this issue.

I have a similar error when installing ubuntu 18.04 from boot USB. I made a BOOT CD and installation was successful.

I think you have three options:

I hope this helps, regards,
Onno

I had this exact same problem, when installing from a USB flash memory stick using the UEFI boot. When that failed, I followed one of the comments here, booting from the non-UEFI generic flash disk to do the install, and that worked. At the time, I knew nothing about UEFI and had no idea why one method worked but not the other.

Since then, I have looked into it a bit, and now understand that UEFI (Unified Extensible Firmware Interface) is a successor to BIOS and has different requirements. In particular, Linux requires a /boot/efi partition if using UEFI, which I had not created (I was creating the partitions manually).

The error messages could certainly be clearer. The UEFI disk partition program should require the efi boot partition before allowing you to proceed. Instead, it performs most of the Linux install before giving the "GRUB installation failed" error.

Not the answer you're looking for? Browse other questions tagged boot grub2 system-installation uefi 18.04 or ask your own question.