Is it possible with Gedit or the command line to modify every fourth line of a text file?

I am trying to convert a text file into a tab separated spreadsheet. My text file is something like this:

With standard search and replace functions in Gedit or LibreOffice, it's easyto replace the end of line with a tab. But if I just swap carriage returns for tabs, I'll get this:

But what I need to do is get it to look like this:

So, can I swap every end of line character for a tab except for every fourth line?

I don't know if that kind of conditional iteration can be done with regular expressions inside a program like Gedit or LibreOffice, so maybe this needs to be some kind of command line function? I'm not even clear on what the best tool to start with is.

I tried the following commands:

But when I try to open the resulting tsv file in LibreOffice, the columns are not quite right. I'm not sure if this means I'm not executing the above commands correctly, or if I'm doing something wrong in the LibreOffice import function: 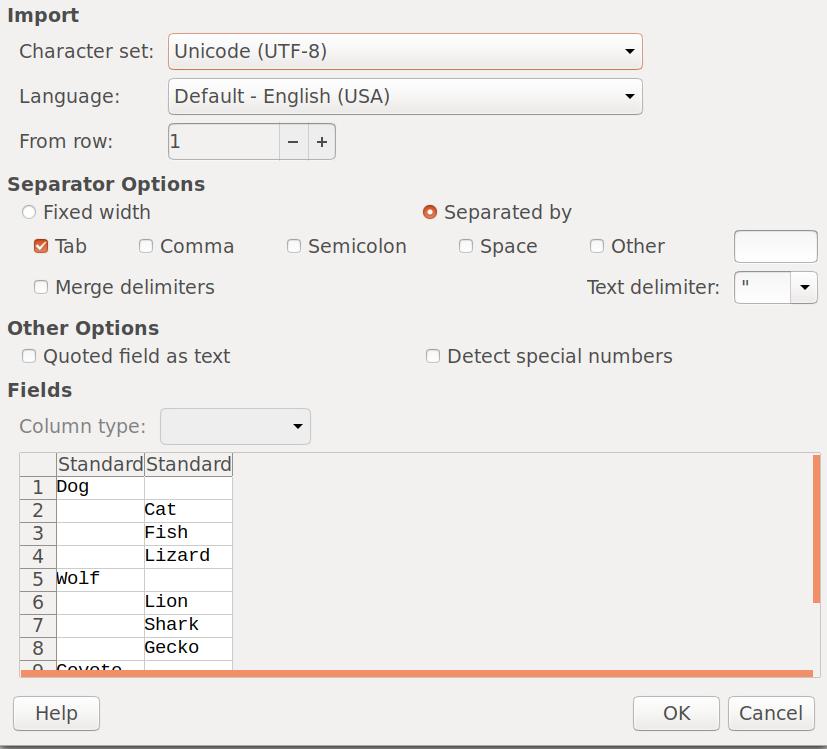 Just for reference, the desired result should look like this: 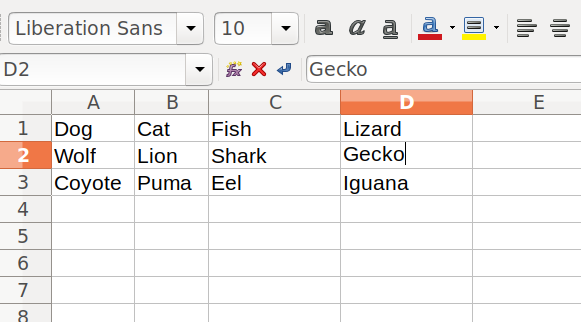 You could use a command-line editor such as sed

or, more programatically, by adding backslash line continuation characters to each of the lines you want to join using GNU sed's n skip m address operator and following it with the classic one-liner for joining continued lines:

However IMHO itwould be easier with one of the other standard text-processing utilities e.g.

(you can omit the -s$'\t if you don't mind the output to be separated by multiple tabs).

The strange re-import behavior that you are observing is almost certainly because the original file has Windows-style CRLF line endings. If you need to work with files from Windows, then you can roll the conversion into the command in various ways e.g.

The former will remove ALL carriage returns whereas the latter will preserve a CR at the end of each of the new lines (which may be what you want if the intended end user is on Windows).

You can use xargs to always group four lines into one, separated with a single space each:

-d '\n' sets the input delimiter to a newline character, otherwise it would also break on spaces. If you only have one word per input line anyway, you can even omit this.
-n4 sets the argument number (the number of input items per output line) to 4.

Or if you want tabs as separators instead of a space, you can replace them afterwards. However, if you had spaces in your input lines, those would get replaced too:

You could also use:

The two awk built-in variables are:

This command will, for each line, display the content of the first (and here only) column. Then it choose to add a newline or a tab by testing the remainder of the division of NR by 4.

This printf the only one column followed by next and next and ... and a Tab \t character after each but will printf a \newline character when Number of Record was factor of 4 (where NR%4 will return 0 (false) which is what Ternary Operator condition(s)?when-true:when-false is doing.)

My solution to this would be to use combination of sed and sed. First, you could mark every fourth line with some special character, for example >, using this solution:

In this case you want to start from line 5 and mark every 4th line after it. In GNU sed that can be given as an address 5~4. You can use this command:

Then you need to remove the newlines, which can be done with a sed loop:

There are easier ways to convert newlines to some other character, for example with tr:

Either way, combining the two gives

(the sed version leaves a trailing newline, while the tr version does not)

After that, you need only convert the special characters you inserted to newlines; see for example Convert a tab-delimited file to use newlines. In this case, change > to newlines:

The y command performs the same function as tr, transforming one character into another, but you can use the s command here equally well. With s, you need g to operate on each match in the line (sed 's/>/\n/g').

Rather than making two intermediate files, you can use pipes:

If trailing spaces are a problem, you can add another command to remove them:

For the sake of "completeness" here's a pure bash solution:

Works also with spaces, assuming IFS is properly set (which it should by default, AFAIK). Moreover, I think this could even be a portable shell script and work with any POSIX compatible shell.

A vim macro (recorded with q) could apply your operation, then skip three lines. Then, you just run that macro n times.

Since you asked for a Gedit solution, something like this should work:

Make sure that the checkbox for regular expressions is marked.

The first step is to find a series of word characters, with \w+, and capture the results in the variable \1 by wrapping parentheses around the expression:

Next we search for a series of line ending characters, \r and \n, or CR and LF. Since Windows formatted files use both, we create a character class by wrapping these two characters in square brackets. The plus makes it search for one or more characters:

Finally, we repeat this 3 more times, storing each subsequent word in variables \2, \3, and \4. This makes our replace with expression simple. We just need to place tab characters, \t, and a new line character, \n, in the appropriate places for the formatting you need.

Not the answer you're looking for? Browse other questions tagged command-line libreoffice gedit or ask your own question.

5
Automatically indenting text that wraps to the next line in Gedit
7
How can you print a text file via gedit from the command line?
4
How to sort lines in a text file alphabetically with gedit
0
Bash script to maintain audit trail / log of files accessed
4
How to print via text-editor (like mousepad) from the command-line?
2
Invalid Characters trying to open text file created in notepad with Gedit