Is zfs-dkms required for ZFS support in generic kernels?

I adapted a ZoL guide for putting Ubuntu Server 14.04 on ZFS root for 18.04 Bionic Beaver and desktop installations: http://vlog.averyfreeman.com/doku.php/ubuntu.18.04.desktop.on.zfs

I'm trying to make sure I have all of the information correct, I've run into a couple issues I'm not sure how to answer:

If anyone actually follows it, I'd like them to have a bootable system after a kernel upgrade! :)

Also, is there a way to prevent having to invoke # zfs import -f rpool and reboot after boot of updated kernel?

ZFS is a combined file system and logical volume manager designed and implemented by a team at Sun Microsystems led by Jeff Bonwick and Matthew Ahrens. Its development started in 2001 and it was officially announced in 2004. In 2005 it was integrated into the main trunk of Solaris and released as part of OpenSolaris. Currently, as of January 2015, it is native to Solaris, OpenSolaris, OpenIndiana, illumos, Joyent SmartOS, OmniOS, FreeBSD, Debian GNU/kFreeBSD systems, NetBSD, OSv and supported on Mac OS with MacZFS.

The name "ZFS" originally stood for "Zettabyte File System". Currently it can store up to 256 ZiB (zebibytes).

The ZFS filesystem is available for Ubuntu as either a FUSE module or a native kernel module. The kernel module is provided by default. To install the user-level tools, simply install:

For all current versions from 16.04 onward.

In addition to be able to have ZFS on root, install:

No where is it mentioned that zfs-dkms is a prerequisite.

kABI is the Kernel Application Binary Interface. It doesn't change very often but when it does all programs must share the same version. 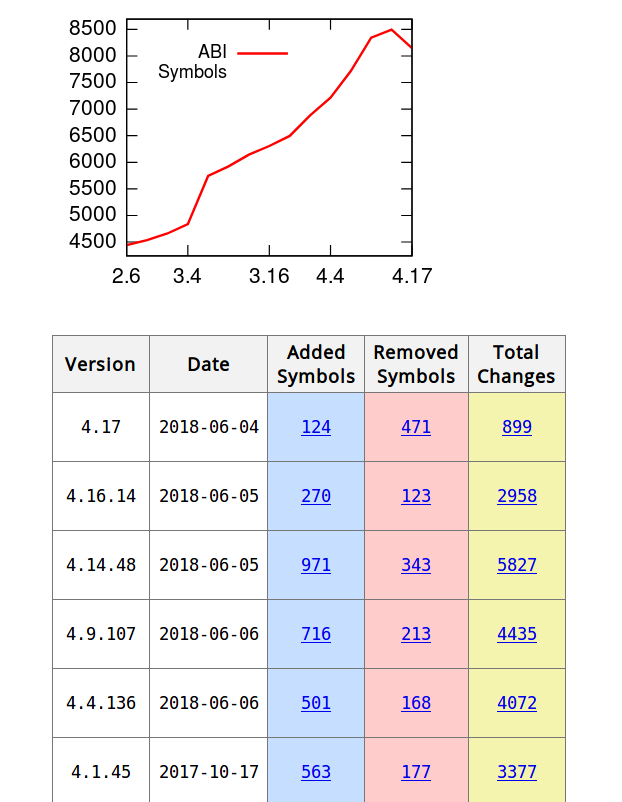 We can see the Linux Kernel numbers revised in June 2018 were:

If you have a generic Ubuntu Kernel and a Linux Mainline kernel after June 2018 in this example, they would both share the same kABI.

Not the answer you're looking for? Browse other questions tagged kernel initramfs zfs dkms or ask your own question.

46
Command to rebuild all DKMS modules for all installed kernels?
2
Updates fail due to “/etc/default/grub: splash”: not found” error
2
zfs legacy mounts on Ubuntu 18.04
0
Getting back to kernel version where DKMS worked
5
What does “Support for ZFS” actually mean?
2
How should I go about testing a backported kernel when I am running ZFS on root?