How to set up VirtualBox Bridged Network on Windows 7 Host?

I have virtualbox running on a Windows 2008 server, with a guest running ubuntu 10.04. The ubuntu guest is given a static IP of 192.168.1.4, which also has openssh installed. The guest has bridged network setup, I can ping 192.168.1.4 from any machine in the LAN, the ubuntu guest can also access the LAN. However, when I try to PuTTY into the ubuntu machine, I always get "connection refused". Below are some setup details:

when I the following command, I can see that sshd is listening on port 22:

It turned out to be a wrong VirtualBox Bridged Network setup. I give the Ubuntu guest a static IP of 192.168.1.4 (assigned to eth0). Then in the Windows 7 host, in the Network and Sharing Center, there is a new connection named "VirtualBox Host-Only Network" after the bridge is setup, that connection is again given the same static IP of 192.168.1.4. Once I change the "VirtualBox Host-Only Network" to automatically obtain an IP address, it's getting a different IP address of 169.254.249.70(Tentative). And now I can SSH into 192.168.1.4 with no problem, even without touching hosts.allow and hosts.deny.

I've also noticed that in the properties windows (see screenshot below) of the "VirtualBox Host-Only Network", the second checkbox, "VirtualBox Bridged Networking Driver" is unchecked. While the same checkbox of the physical NIC (that is bridged to) is checked. So my further question is: is this how VBox bridged networking supposed to be setup? Any rationale behind this? I'd appreciate if someone could provide some explaination on VBox bridged networking setup on Windows host and I'll accept it as an answer. 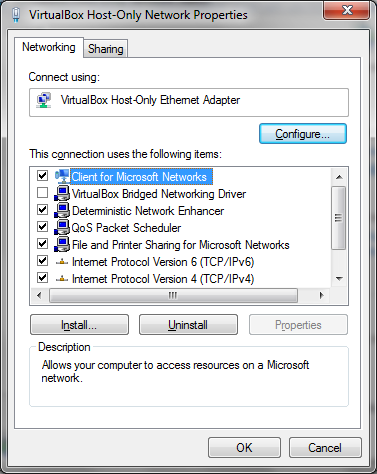 Here's a similar situation and what I did to resolve. I had my network settings set to NAT, which resulted in my guest not using the hosts network adapter. The ip was set and then I found out later:

Even though I switched I needed to refresh my guest network adapter to pick up a new ip address, use the commmand ifconfig in the guest to find out what IP its using and set bbb-conf setip to that ip address result from ifconfig. The guest will use the host's adapter to get out to the web/network.

For a Putty connection, run this command on your guest: sudo apt-get install openssh-server

Run Putty with the ip from above (ifconfig result) with port 22.

Here is a good read on host-only networking:
http://christophermaier.name/blog/2010/09/01/host-only-networking-with-virtualbox

Not the answer you're looking for? Browse other questions tagged virtualbox or ask your own question.

0
How to get direct access to host network from Virtualbox running Ubuntu?