I am an beginner to python and ubuntu. I am trying to run two python scripts at the same time in terminal,my command in the terminal is:

one.py prints a four variable array to the terminal

I believe this process in ubuntu terminal is called pipelining.

The problem now I am facing is the python script three.py waits until python script one.py to complete its execution. I want it to happen in real time, whenever one.py has an output, three.py should read and store this value in realtime. 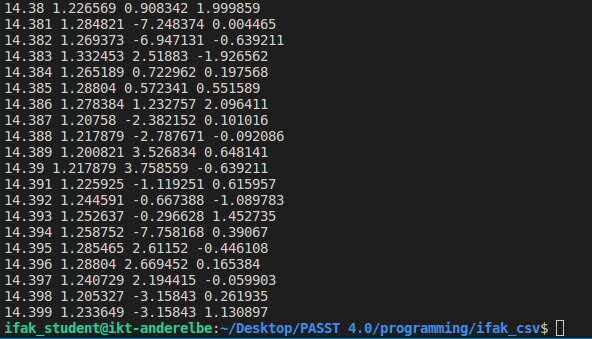 Your implementation of three.py is incorrect.

You tell Python to read all lines from standard input and store it as list in your temp variable. It's obvious that this call blocks until the input is exhausted, which happens only when one.py is finished and exits, closing the pipeline. Only after that you start processing the input.

What you can do instead is to read from standard input line by line in a loop, like this:

Not the answer you're looking for? Browse other questions tagged python or ask your own question.

3
Unable to save scripts from the Python interpreter
5
running gnome-terminal with no window border on startup in xubuntu 12.10
0
How can I run python scripts on my webserver?
0
Is it possible to send selected code(whole documents) to the gedit terminal for execution?
1
geany output to same terminal instance
1
Switch between two versions of python in the same environment
1
How to capture terminal output as execution proceeds?
4
Virtual microphone and python
1
How to redirect only part of output produced by a commmand?