How to build cmake-gui on Linux from source?

I tried downloading https://cmake.org/files/v3.11/cmake-3.11.0.tar.gz and building it, but there is no cmake-gui in ./bin subfolder after build. Is cmake-gui supplied in another source archive?

Nothing else depends on cmake (probably) so it's a leaf node. Uninstall the deb. Get the latest source from https://cmake.org/ and unpack the tarball somewhere, cd into it.

Assuming you have the QT dev stuff installed. You end up with both regular command-line cmake and cmake-qui. Start them from the command line by typing cmake or cmake-gui, I don't know about adding to menus.

1. Install Qt (if you don't have it already)

2. git clone the cmake sources from their git repository to somewhere (e.g., your home directory).

That will, among other things, place a file named CMakeCache.txt in your build folder.

4. Edit CMakeCache.txt to configure the ui

5. Re-run cmake .. in the build directory

6. Compile cmake (in the build directory)

Where N is the number of cores you want to compile, in my case I typed make -j10.

I needed to do the following:

Link our built version of cmake into /usr/bin/

Type cmake-gui to start the UI 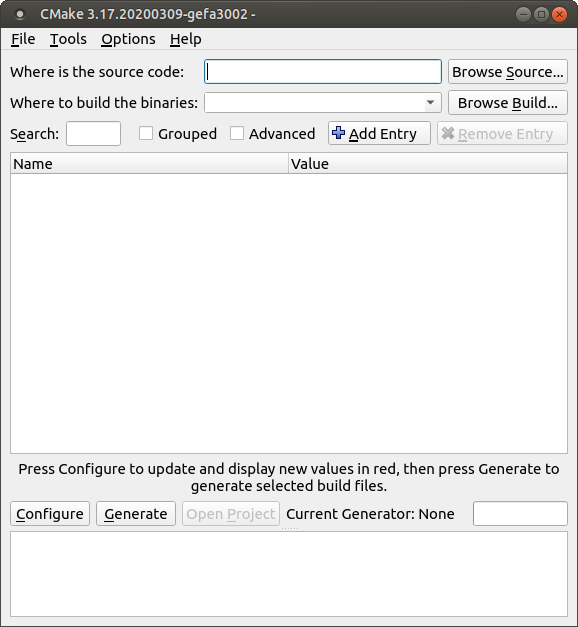 Not the answer you're looking for? Browse other questions tagged 14.04 cmake or ask your own question.

2
cmake fails with “Could NOT find HDF5”
1
Error in connecting CMake to FreeBASIC compiler. CMake Error: The source directory does not appear to contain CMakeLists.txt
1
How to install rsibreak 0.12.1 from source using cmake?
2
Building OpenSceneGraph 3.4 from source Ubuntu
2
Linker error scrolling past too quickly
1
compile soft without cmake or how to install cmake without libcurl4