I'm trying to record sound from my piano which only has 'headphones' audio output (as well as loudspeakers), so there is no USB for things like MIDI. Thus I connect the piano to my computer using a double jack cable.

I tried to record with Audacity, but I'm not able to get any sound to my computer through the jack cable : at first I only had pulse (and default) as input sources.

I installed pulseaudio-module-jack but that didn't help. Then I installed Ardour5 (that doesn't work at all, but that's not the point of this question) which automatically installed qjackctl, but the only way I found to launch JACK was to change the default configuration : I had to change the Input and Output devices from (default) to hw:PCH.

So now I can select JACK Audio Connection Kit instead of ALSA in Audacity, but the input sources either are system, which gives nothing else than the built-in microphone output, or PulseAudio JACK Sink, which doesn't work at all (Audacity only shows a flat line).

Is there something wrong with how I configured qjackctl ? Or is there any other tool to record audio from the jack ?

So - there's an oddity in Ardour: If you have jackd running in an attempt to use realtime mode, Ardour will fail. And if you start jack from Ardour, Ardour will always try to start with realtime mode enabled...

The solution to this is to force jackd to start without realime enabled. The easy way to do this, is to use qjackctl and in it's setup, un-check the realtime mode checkbox: 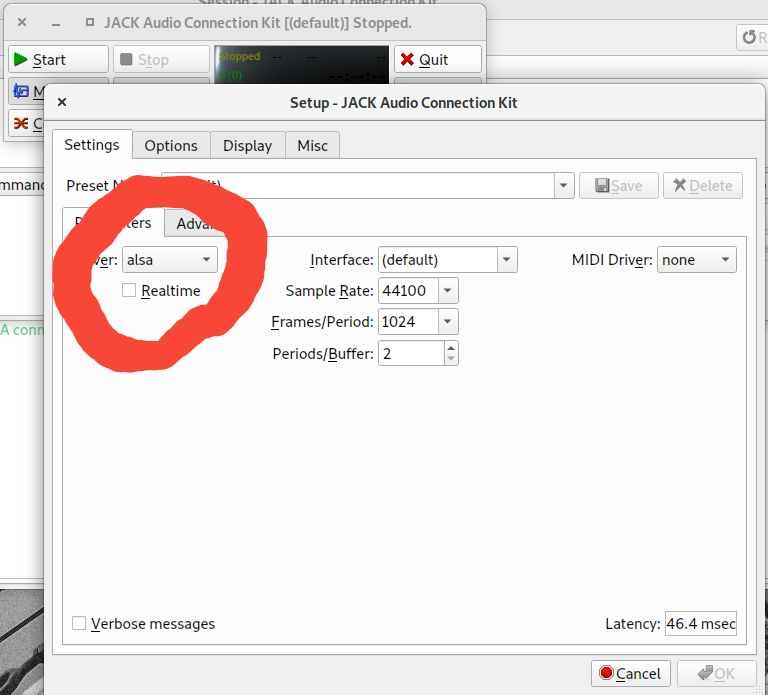 Not the answer you're looking for? Browse other questions tagged sound pulseaudio audio-jack or ask your own question.

1
how to record sound via headphone in audacity

5
Can I record playback with audacity without Pulseaudio?
0
Is possible to record MIDI via USB from a roll up piano?
0
Digitech USB multi-effect with Jack
4
JACK breaks audio. How do I fix it?
1
Built-in Speaker doesn't work after installing JACK
0
How can I use audacity to record audio output along with mic input?
1
Midi not Working after installing Jack