I know this looks like a question that must've already been answered, but I've looked everywhere for a solution.

I'm running ubuntu 17.10 on an 80-key dell Inspiron 11 and I'm trying to add the Latinamerican ("latam") keyboard layout alongside my en (US). The settings GUI lets me add the Spanish ("es") keyboard without a problem, but that has the accent keys in different places. The latam keyboard doesn't show up in the GUI. This wasn't a problem in 16.04.

I've played around with /etc/default/keyboard and dpkg-reconfigure keyboard-configuration, but I haven't gotten them to stick. I also plan on adding a few more layouts, but the most important are en and latam. Thanks!

It's there. If you click a Latin American country, e.g. Spanish (Argentina), you are taken to a sub menu which includes Spanish (Latin American).

Now, if you open Settings -> Region & Language and select Spanish under Input Sources, the sub menu you are taken to will include Spanish (Latin American).

<rant>
The design makes no sense. Keyboard layouts should not have anything to do with which locales you happen to have generated. Personally I think this a design bug which should be reported to the GNOME developers.
</rant>

I guess your keyboard is in English.

I used to have English keyboard with Spanish(Latin American keyboard). But now, a much simpler way is to use English (US with dead keys), you can simple use the accents with ease, for example:

This way you don't need to switch keyboards.

The way to install more inputs works for me in the following screen: 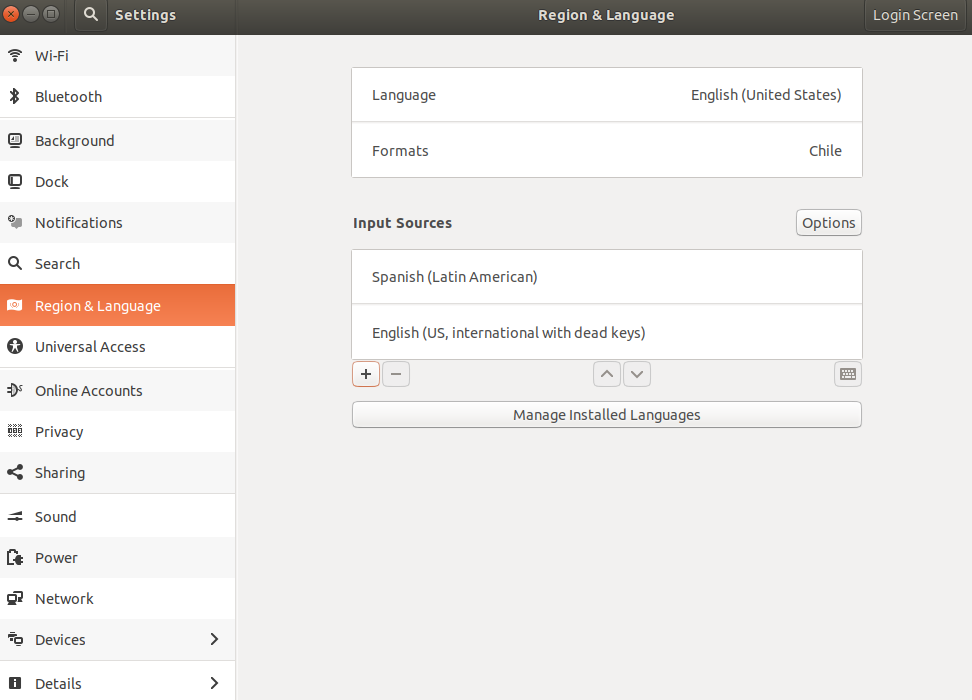 Not the answer you're looking for? Browse other questions tagged 17.10 keyboard-layout or ask your own question.