Is there a way for grub to automatically reboot into Windows from Windows?

I have a dual boot setup:

Currently when I want to reboot from Ubuntu into Windows I use grub-reboot with the appropriate number as argument. This works well.

However sometimes Windows needs a reboot so a certain program can install or update and I manually have to select the right grub boot menu entry. Is there a similar way (from Windows UI) to tell grub which entry to boot?

I suppose the grub-reboot command passes the argument to a file which is in turn read by grub upon reboot.

edit (concerning my selected answer): I'm currently looking into mounting the ext4 drive that contains /boot and scripting the edit. this will possibly take quite a while since i'm doing this in my free time beside my 40h/week non-tech job. ^^

Easiest way is with Grub

It is cumbersome controlling grub from Windows. A third party application to access Ubuntu from Windows and some hacking is required. However from the top part of this post: How to change the order on my dual booting distros, you can setup grub to automatically reboot to the last menu option. So when you initially boot with windows, and it wakes up at 2 am to run updates, grub will reload Windows so it can gracefully finish updates.

When you manually reboot and pick Ubuntu from grub all your next reboots automatically load Ubuntu. This feature works equally well if you have bugs in the current kernel and want grub to automatically reboot into an older kernel version you selected.

How to get Grub to repeat last boot selection

The first line you will be commenting out and right below that insert the next two lines.

Save the file and type in the terminal:

From this modified Stack Exchange answer you can use the grub default to reboot into Windows. Copy this code into your ~/.bashrc file:

To reboot into Windows from the command line use:

You can replicate what grub-reboot does. It's just a script that eventually calls:

Where Windows is the name of your grub menu entry. It might not be that

I ran that. All it does it insert next_entry=Windows into /boot/grub/grubenv. On line 2. So if it's just a file, on a filesystem, you can do exactly the same thing from within Windows. It's a Windows problem to solve, but here's the high-level overview:

Scripting that in Windows is well outside my comfort zone and not really what we do here. But that should be all you need to do.

grub-set-default should do the same as grub-reboot, but make the setting permanent. This is not exactly from Windows UI, as you asked, but maybe it works for you.

You haven't said which version of Windows or whether you're on UEFI.

If you're using a proper UEFI boot (and not legacy boot), it is possible to temporarily boot to the Windows UEFI boot entry. On Linux, this can be done using tools like efibootmgr. On Windows, I personally use EasyUEFI. It is free for personal, GUI use, but not for enterprise or CLI use. I can't vouch for its safety. It also seems to be somewhat slow, but it does seem to work

In my own setup, which uses Arch Linux (kernel EFI shim, without GRUB), and Windows 10, this is how it looks like, after picking "Manage EFI Boot Option" on the starting screen: 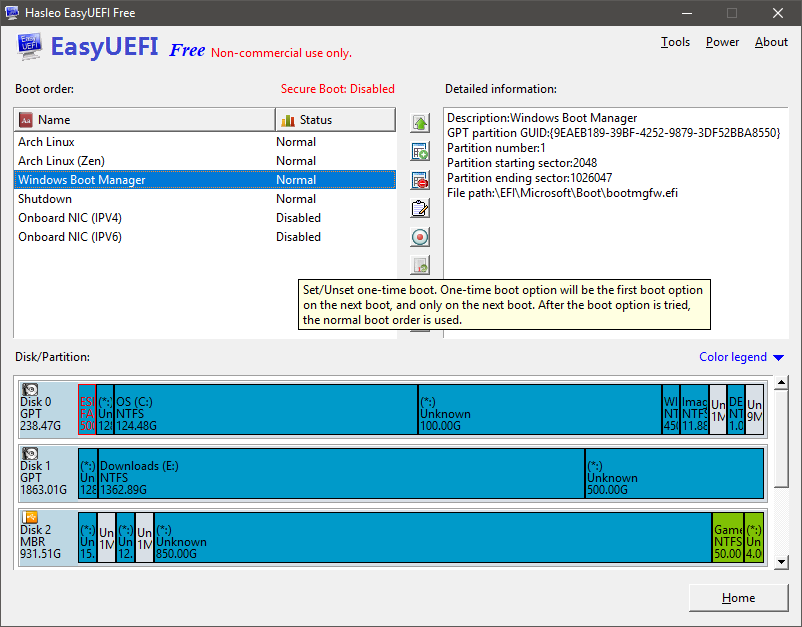 If you're using UEFI boot, you should see something similar for Windows, plus a single entry for Ubuntu (which loads GRUB), plus some other device-specific options. The one-time boot option can then be used to set to boot to the UEFI boot entry for Windows once, and then back to GRUB the boot after that. After setting that, you restart as normal.

4
Choosing Startup Disk Prior to Boot
25
How can I prevent Windows 10 from corrupting the ext4 superblock every time?
5
Install /boot on fat32 partition
2
How to change the order on my dual booting distros
2
Restore specific kernel & modules (nvidia drivers)
1
Is there's a way to switch between linux and windows by commands
0
How to automatically boot into Windows instead of Ubuntu n times?