For several days since install I had my Broacom Wi-Fi working flawlessly on both interfaces, 2.4 GHz and 5 GHz. To install it I had to install 2 packages firmware-b43-installer and b43-fwcutter. However following a prolonged DNS server failure, the 5 GHz interface is shown permanently as Out of Range and unusable. 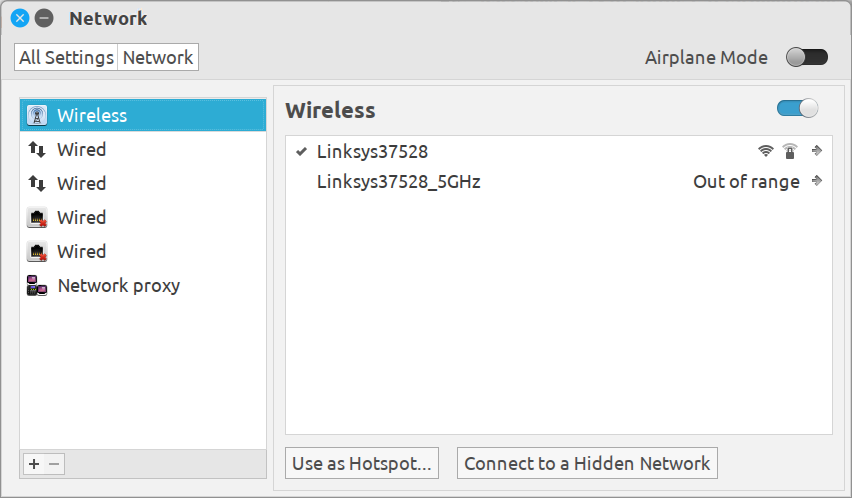 Although Mac OS and Windows still have no problem using it, right on the same hardware in multi-boot... So it's definitely a configuration failure in Ubuntu.

I did a full removal, purging the 2 packages and re-installing them to no avail. For instance right after the original install I could see some brcmwl hardware while checking for hard blocked:

Right after the trouble appeared and as well after full re-install of the 2 packages I have only:

As well the following command list only the 2.4 GHz interface:

Running theWireless Info Script suggested by this answer from Ask Ubuntu, and posted online here, just list the 14 2.4 GHz channel frequencies on wlp5s0b1 interface. However no wlp5s0b0 or wlp5s0b2 is found, and this is the real problem.

One excerpt shows troubling info. as well regarding the 5GHz interface:

As the [ipv4] method=auto is dead false. It is like on the 2.4 GHz set to manual. I did set it another time to manual , but still the profile won't budge to auto here. Although when checking in System Settings it is definitely set as manual addressing.

Where can I find the appropriate support in Ubuntu to fix this troubling network adapter configuration ? There seems to be close to none support about it.

Well, I ended up re-installing package bcmwl-kernel-source as chili555 told me. Thanks for his suggestion.

The reason why is that installing the package bcmwl-kernel-source will allow Ubuntu to see the 5 GHz Wi-Fi Interface.

The trouble is that with both packages bcmwl-kernel-source and firmware-b43-installer installed, the Wi-Fi connection is dropped randomly (several times per hour at times). There might be some concurrent activity behind, a race condition between the 2 ?

It should be noted that from this reference answer, only firmware-b43-installer is required. as the PCI id is:

Uninstalling bcmwl-kernel-source will stop the connection drops, however, from my experience, if there is a problem on the connection like a DNS Server down, you can loose the 5 GHz interface altogether as shown in the question itself.

It's a shame that we are not getting a fully working driver solution from Broadcom. This network adapter works flawlessly on 2.4 GHz and 5 GHz in Windows and Mac OS X. It looks like the working package firmware-b43-installer is old enough not to support the 5 GHz interface ?

Another answer has already suggested the removal of package bcmwl-kernel-source to avoid the connection dropping randomly. However, at least one user found this solution not functional as well.

In the mean time I wrote a quick bash script named check-for-wi-fi-up-and-runnig to restore the Wi-Fi connection as soon as it's disconnected:

May be I can throttled down sleep 3 to sleep 1, pending further testing.

So basically, right now it is a trade off between no connection dropping, but having to re-install a driver package at times or an unstable connection with several drops per hour at times ...

Not the answer you're looking for? Browse other questions tagged networking network-manager broadcom or ask your own question.

390
Installing Broadcom Wireless Drivers
112
My wireless/WiFi connection does not work. What information is needed to diagnose the issue?
42
How can I check Internet connectivity in a console?