Methods to try out new OS releases without committing to it?

I want to try new OS releases as they arrive, such as Ubuntu 17.04 or Ubuntu 17.10 to see new features. I also like to look at Kubuntu, CentOS or other distros (Windows 11 when it arrives?) - or set up test environments knowing I may trash them and do not want to do this to my core machine.

USB alternatives are good, when

If you want to

you can create a

or if you have/get a fast USB pendrive of at least 16 GB, you can create an

One way to test new distros and OS versions is with virtualization. It does not require space for an additional PC/keyboard/video/mouse or adapters to run multiple PCs with a single keyboard, video, mouse. It only requires a single PC and some virtualization software.

This assumes that you have a machine with a multi-core CPU capable of virtualization and a reasonable amount of memory. I would recommend at least 8GB of memory with 16GB better if you have it.

If you are running Ubuntu and only want to try Linux distros (I do not believe Windows will work), you can use the free virtualization software packaged in Ubuntu: KVM or Xen. Both work fine, are FREE, and can run various Linux distros. However, the tools to manage the VMs are somewhat lacking. Oracle has a FREE version of a virtualization tool called VirtualBox and of course there is always the commercial VMWare product. Both VirtualBox and VMWare can also run Ubuntu on top of a Windows machine if that is your desktop of choice.

By using a VM manager, you will be able to add new distros as they come out, test them, play with the new features, and then discard them when the new release appears. They only eat up disk space when not running, so they do not even need to be discarded unless that becomes tight. With a VM manager, it is easy to balance 5, 10 or more distros on a machine and be able to boot them up and take them down as needed. If you are lucky enough to have a 32GB or 64GB machine, you can even run them all in parallel.

As an even faster and cheaper alternative to sudodus’ answer you can boot directly from a bootable drive image file instead of a dedicated (USB) drive.

At least for Ubuntu ISO images (and derivatives like Linux Mint) the following recipe works. Other distributions may need further tweaking.

1 Other file system types are possible but may require other Grub commands and boot parameter tweaking.

2 LVM, RAID and encrypted file systems should work thanks to Grub’s utility library but I didn’t test them.

Virtualization is by far the simplest.

However you have 2 seperate use cases here, which will have different solutions

Distributions are basically determined by the packaged applications, and userspace environment (e.g. SystemD vs init for boot)

If you want to "evaluate" the UIX of a different distribution, qualitatively, then I would recommend full-blown virtualization where you install the OS in its entirety and evaluate its usability. This is covered adequately in other answers.

If you simply need the userspace environment for testing then read on.

It is easier, cheaper, and faster to use containerization, a form of light weight virtualization that uses the kernel to create sandboxed environments.

A container shares kernel resources with the Host, but otherwise has its own root file system, userspace, network stack, etc. It can be thought of, conceptually as a chroot on steroids. However, because the kernel is shared the virtualization is "thin", meaning that for most practical purposes it runs at the same speed as the host OS.

There is commonly used container system called docker. Docker has standardized images for practically every linux distribution you would like, and it runs on windows (however, windows images only work on windows, linux images work on both) . It has additional useful features to save space and performance.

There are also native open source alternatives for linux like LXC (which is built into the kernel!) , which can be used to much the same thing (but with more configuration required).

Simplified Example of a testing or build environment in docker

Then from the command line, compile your project or tests in that environment in a variety of ways

"login" and compile within the environment, run tests etc. Assuming you are in source directory of your project

You can even pass environment variables

Or start a persistent instance and copy files into it explicitly

There are literally hundreds of other use patterns, however, the script-like image definition, extendable images, and command line use makes it extremely attractive for development, test, and even deployment environments

I keep a separate partition on my drive (recommend 20GB minimum, more if you can).

I can install onto that partition any OS I want to test, and then reboot into it.

If everything is working well, I can deprecate my original OS partition, and eventually repurpose it.

But if the new OS is not working out for me (driver issues, unavailable software) then I can simply reboot back into my old OS, and be thankful that I still have it!

My record was 4 Linux OSes on one machine, and a Windows XP. I used to boot into Gentoo for speed and fun, but run my webserver and mailserver in a chroot to the trusted Debian OS.

(*) You can configure a different home folder for each OS, by editing /etc/passwd. Set your home to /home/you/arch-test then target the shared home partition in /etc/fstab and reboot. You can symlink some dotfiles to be shared across both OSes, whilst leaving others to be OS-specific.

You basically have three options: virtualization (VirtualBox or Docker), a bootable flash drive (modern alternative to a live CD), or dual boot from a partition. Choosing between the three depends on your needs, hardware, and experience. Some of the other answers go into a lot more detail about a particular approach, but here's a high-level comparison to give you a framework for deciding between them.

3. Dual boot from a partition

QEMU is a virtualization solution that theoretically solves this question's requirements for cheap and simple.

It allows drag and drop booting of operating system iso files within a Linux or Windows host.

It also allows booting of Live USB hard drives, within a host system and uses the persistence if available.

There is no need to build a virtual hard disk as with VBox.

QEMU is available as a command line app for Linux, Windows and other OS. It is also available as a GUI and is included with MultiBootUSB Linux and Windows versions http://multibootusb.org/. 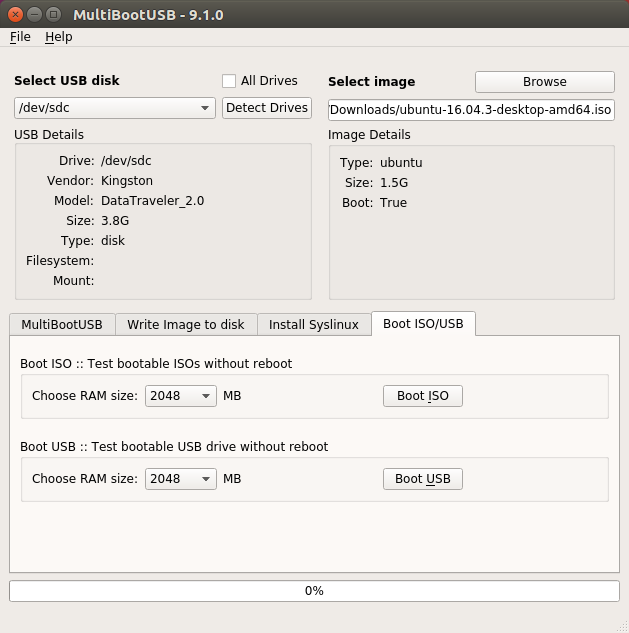 QEMU can also be run from Virtual Machine Manager, which is faster than MBUSB but is not drag and drop.

The simplest and easiest way is using virtualization. You can download VirtualBox (it is open source) and install any operating system. And, I recommend you to create a snapshot before run for first time, in this way you can fallback to its previous state if you make any mistake setting it up, changing configuration, etc.

I have use and test several OS in this way. It is very simple and quick. Even, I have used MSDOS and Windows 3.1 using virtualization. You can install anything, even ChromeOS (with a little of work) or any version of Windows or Linux, it doesn't matter its desktop flavor.

I've successfully booted full installs of Ubuntu from USB drives for the last 3 years. USB 2.0 was a little slower than an older 3G SATA HD (7200 rpm 16 MB cache), but USB 3.0 is within a couple seconds of a SSD on a 3G SATA interface.

116
How to install Ubuntu on VirtualBox?
20
Can't format my usb drive. I have already tried with mkdosfs and gparted
6
Is DD Image disk writing permanent?
5
Formatting a USB stick - unable to operate USB
4
How long is it supposed to take "creating a persistant file" with Universal USB Installer?
8
Boot Ubuntu from external drive
3
Ubuntu live from USB with full persistence and NTFS
0
Ubuntu desktop disk image (16.04.4 -desktop- amd64.iso) could not be opened
0
Saving files to a bootable USB stick
0
Can Ubuntu 13.04 be loaded with a USB flash drive?
See more linked questions

9
Automatically choose "Try Ubuntu without Installing" after booting from USB Startup Disk
3
Do I really need both bootloaders? It really slow down the actual boot up time
0
What is the best way to try Ubuntu out?
0
Ubuntu 12.04 crashes after selecting 'Try Without Installing' on Windows PC
3
Try out wayland on Ubuntu Gnome 17.04
0
Try Ubuntu 20.04 without installing
0
How to determine where GRUB really is