Pros and cons of installing Ubuntu alongside Windows Boot Manager 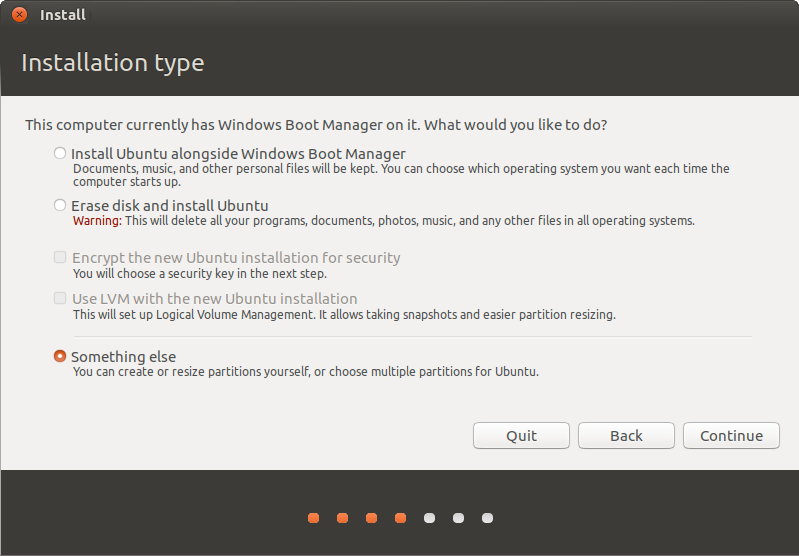 On a personal note, I would recommend you to stick with Something else option only. The reason is - I have personally messed 4 laptop hard disks simply because I failed to understand the right process.

Choosing Install alongside Windows boot manager is safe, but please do take note of everything to avoid messing your hard disk. If you are in any doubt, stick with Something else option only.

You can take help of this link dual boot windows and ubuntu if you want to perform every step with utmost caution.

Once you are done installing Ubuntu, perform the following steps to setup your grub menu:

P.S - You do not need to have admin rights on command prompt before you perform the above action.

Is it safe to choose that option?

It's not always safe to choose that option. If there is already a Windows EFI system partition, the Ubuntu installer will often detect it and use the existing Windows system partition instead of creating a new one, but if the Ubuntu installer did not correctly identify the existing Windows OS it's possible that it also did not identify the partition that is used by the computer to boot Windows, if such a partition exists. In such a case it's possible that Ubuntu will not install the grub bootloader because it doesn't know where to install grub, and the entire Ubuntu installation will abort. If this happens you can still install Ubuntu by choosing the Something else option at the Installation type screen of the Ubuntu installer.

The EFI System Partition (ESP) is a partition on a data storage device (usually an HDD or SSD) that is used by computers adhering to the Unified Extensible Firmware Interface (UEFI). The EFI System Partition is an interface that's used by the computer to boot Windows. It's like a step that is taken before it runs the Windows partition. It's a small partition, but without that partition your computer wouldn't know how to boot Windows.

Not the answer you're looking for? Browse other questions tagged dual-boot grub2 partitioning system-installation bootloader or ask your own question.

16
How much swap should I take for 1GB to 8TB of RAM on 14.04 or higher?
1
How can I modify the boot loader string of an existing UEFI entry from linux?
1
Main Drive is not showing in the Ubuntu Simple Install
1
Difference “alongside Windows 10” and “alongside Windows Boot Manager”