LibreOffice doesn't show 'Display'-mode Word equations correctly; is there a Linux word processor which can?

In Microsoft Word, there are two ways to display equations; Inline and Display. An inline equation is in line with text (as the name suggests), so that equations and text can be mixed. A display equation appears on its own line and is automatically centred, like so:

These are three separate equations, but because they are set to display mode they all appear centred and on their own line. If their mode is changed to inline, they all appear on the same line and not centred instead: 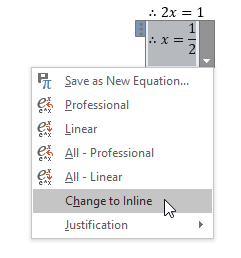 Is there a setting which I can change to get display-mode equations to be on their own lines and centred, like they are in Word? Due to the sheer quantity of Word documents I have, I'd rather not modify the documents individually.

If not, is there an alternative word processor which displays the equations correctly?

When a formula is inserted in LibreOffice, it gets anchored As Character by default. 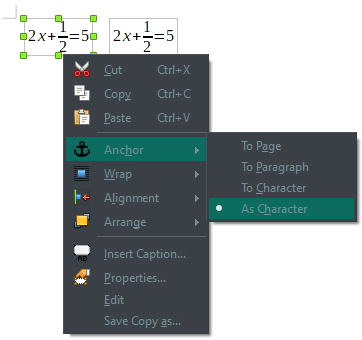 This means that it behaves the same as characters do. So we treat it the same way as if we had three characters, for example "abc" instead of three equations.

Now, all three equations are centered and on separate lines.

Here is the result of these instructions for the "abc" example, showing that formulas behave the same as characters. (Pressing Enter auto-corrected to upper case "A").

To make this work in both MS Word and LibreOffice, perhaps use the Inline setting only. However, I do not have a copy of MS Word to verify this, and Word Online cannot edit formulas (but can display them if that is all you need).

Is there an alternative word processor which uses the Display formula setting as MS Word does? Quite possibly; there are a number of alternatives either paid or free. Whatever alternative you choose, though, there will be incompatibilities of some kind.

I've accepted that it's unlikely there is a Word processor with this functionality for Linux, so I decided to automate Jim K's answer by creating a Ruby script.

The origin of the issue is that LibreOffice ignores the m:oMathPara XML element, which is also what Word wraps a display-mode equation in to centre it and put it on its own paragraph.

The Ruby script below uses the Nokogiri XML parsing library to replace all occurences of m:oMathPara with standard w:p paragraphs, which are also formatted to be centre-aligned. It does the following:

This hasn't been tested much, so you should back up any files you use it on just in case. Note that it will only work on Linux, and requires the unzip tool to be installed. (It's on universe if you don't have it: sudo apt install unzip.) You might need to gem install nokogiri too.

Not the answer you're looking for? Browse other questions tagged software-recommendation libreoffice microsoft-word word-processor or ask your own question.

0
Why can't flowcharts or mathematical equations created in Microsoft Office and saved in .docx format be opened by LibreOffice?
1
How to produce MathType equations in a MS Word document under Ubuntu?
8
Why is Microsoft Word complaining about Libre Office's .odt files being corrupt?
4
Opening .docx attachments in Firefox using LibreOffice
5
Does LibreOffice Writer or any other word processor support inline equations?
3
File format problem, libreoffice writer is odt format, but i need .pdf, .doc, .docx, .rtf and .txt files format
2
Is it possible to convert abw to docx or doc offline
0
MS Word alternative for Ubuntu to work with templates having mergefields and if conditions