My laptop SSD is acting up and the number of errors soared since the last time I posted.

Is this drive dead / dying?
It's on now and I'm writing this on it - I have all my data backed up and all, but I am still unsure if it's usable or not?

Contacting the manufacturer didn't help much: they asked me to install Windows and run the disk check utility from there or connect it as an external drive to a Windows host and test it there.
I did both and no errors were encountered.

I also checked it with the utility they provide (see screenshot below). I then used the image I made with clonezilla to return to Ubuntu, and I found that the SATA PHY error count is nearing 300 errors!

I've also checked the connectors, but since the SSD is in a laptop I cannot change the cable (easily).

These are the test results generated by the manufacturer's utility 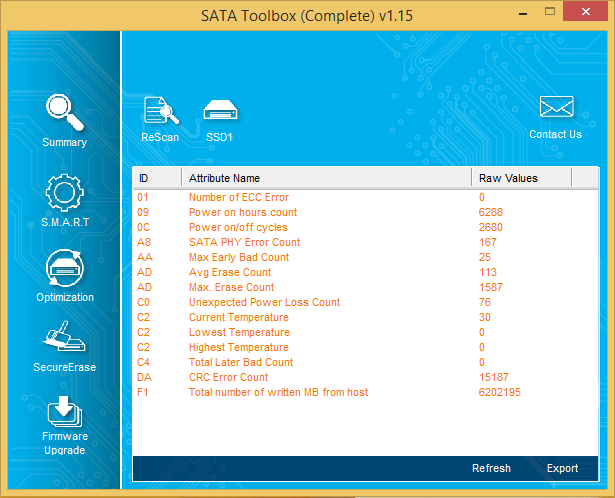 And the smartctl output on Ubuntu, later:

People have tried a lot of things in the comments, but this SSD seems to have some issues.

Judging by the S.M.A.R.T readouts, your drive has not seen a lot of action (~250 power on days, ~6 TB written) and you say it is about 2 years old. This should well be inside the warranty!

Some time before May 11, 2017 you updated your SSD Firmware. However a new version was released in September 2017 and you should apply it using Windows.

Run fstrim to discard unused blocks in the file system:

In my case the results for Windows 10 partitions /mnt/c and /mnt/e were out of this world. So I checked the files and no harm was done to the data.

Run fsck -f on your SSD after booting with a Live-USB when the partition is not mounted. Another option is running fsck -f from grub - How to fsck hard drive while hard drive is unmounted, using bootable USB stick?.

As mentioned in comments a bad SATA cable can cause errors. But as this answer points out, a loose connection can also cause errors. To rule out a bad/loose connection, remove the plugs from your SSD, blow compressed air over them and the male pins on the drive and firmly reseat the cables.

How much is your time worth?

The last question is how much is your time worth. Assuming you've spent 10 hours on this problem it works out to $5 / hour because many brand new 120GB SATA III SSDs can be purchased from ebay.com

I read all the other answers tonight. One answer says to return it. But if you do and they find nothing wrong they'll simply send it back and you'll be without a drive for 2 weeks to 2 months.

Another answer says smartctl reports there is nothing wrong with the drive.

In this answer I suggested running fsck -f and you responded that no errors were reported.

As a compromise between the negative answer (return it) and the positive answer (nothing is wrong), my inclination would be to run fsck on every boot. If an error is discovered the boot is paused and you can read the error message. To summarize the link use:

Note: replace X with your drive letter, ie a, b, etc..

If after a month of no errors, change the value from 1 to 30 which is typical for most systems I believe. On a typical SSD the fsck will run quickly.

Others mentioned replacing the SATA cable which is problematic for a laptop. As a compromise consider unplugging all cables on the drive side, using compressed air on male and female ends and then plugging the cables back in firmly.

There is nothing wrong with your drive. All tests pass. You are simply misinterpreting the SMART data.

Firstly, the first screenshot contains raw data and you cannot draw any conclusions about it. I have no idea what use its creator thinks that data would be to anybody, but it doesn't really mean anything. Unless the meaningful columns can be reached by scrolling right in the window or something.

Let me explain the columns in the SMART report (the latter report you posted).

To address some specific areas of the report:

This reflects everything passed. None of the metrics measured has ever entered a failure state.

The log of "errors" is relatively typical for a drive. These do not necessarily indicate unrecoverable errors or even problems with the drive itself; their reports are vague, so you can't tell what actually happened from this except that it was during DMA transfer at the controller, but if anything was important it would be reflected in the overall health report. In particular, these ones could be something fairly innocent like writes that were cancelled at the controller end, or the OS requesting some feature during load that the drive doesn't support, which may be entirely normal when probing device capabilities.

Since you have only WRITE DMA errors and short and long tests show no errors.

And since DMA, is about the Direct Memory Access, try to find out if the BIOS has a separate hardware diagnostics test, and try the memory related tests.

If not a BIOS embedded test is available, look at the manufacturers support site if an offline hardware diagnostics is available (eg: bootable ISO file to burn on CD or USB-stick)

Because DMA write is IO, I would try to replace the SATA cable and look if no new error numbers are added after that (last one is here 298 but more can be added bynow)

Not the answer you're looking for? Browse other questions tagged ssd hardware disk ubuntu-gnome smart or ask your own question.

5
Is my SSD dying? Please help!
1
How to fsck hard drive while hard drive is unmounted, using bootable USB stick?

2
SSD Installation error: Read-only file system: '/target/bin'
5
Should I be concerned about COMRESET errors with my SSD?
0
SSD errors with 12.04
3
fstrim fails with "thediscard operation is not supported"
1
Ubuntu 21.10 crashes randomly with "read-only filesystem" errors