First off, I realize that what I'm hoping to get is not the expected behavior.

On my older desktop, I have the following set up: Ubuntu 10.04. Xfce running (installed after the fact). I use the Xfce4-terminal, with transparency turned on. In this set up, as expected when a terminal window is over the desktop, it shows the desktop background image. However, if I drag the terminal window on top of a window, it continues to show the background as if the window wasn't there. 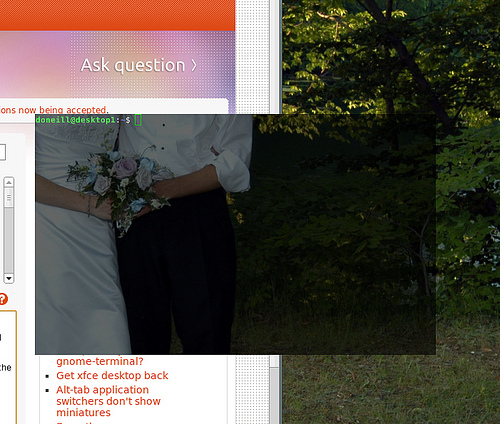 It's kind of weird that way, but I've gotten used to it.

Now, as I've set up my new desktop (11.10 w/ Xfce installed) transparency works the 'normal/correct' way, but I'd rather have it go back to leaving out windows.

So is it possible to get my new setup to do the old way?

(In response to David's comment I offer this answer as a possible solution, as it worked for David and me with recent versions of Xfce.)

In Xfce, you can go to settings > settings manager > window manager tweaks and switch off the compositor, which manages transparency and the overlaying of X windows. You can do it via the command-line with xfconf-query:

That should give you back pseudo-transparency, as long as you are not running any other compositors and only the standard Xfce window manager. With compositing on I had full 'real' transparency with guake and with it off I had the old style 'pseudo' transparency.

You will also have to restart guake to see any difference. This is about the only way to do it I think, as there won't be any settings in guake itself as it is highly dependent on your own customised setup and whether you have compositing enabled in xfwm4 or in whichever window manager you are using on your setup. 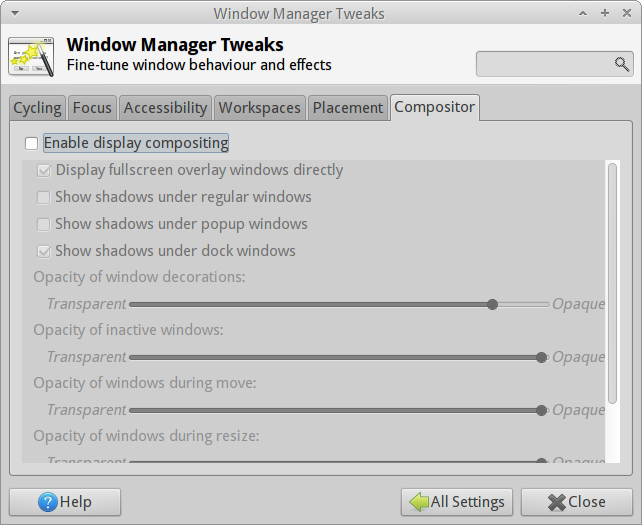 Not the answer you're looking for? Browse other questions tagged command-line xfce transparency or ask your own question.

5
How do I get transparent windows to show all windows beneath them?

1
Get xfce desktop back
12
How to convert Ubuntu to Xubuntu
16
Modify xfce startup applications
2
Every Program is executed in terminal windows when opened using run dialog
7
How to remove transparency from a GTK theme?
3
XFCE running but core features not working
1
Move the menus to their window menu bars